Justine Davis stopped by the Tule blog to discuss the second book in The Raffertys of Last Stand series, A Texas Christmas Miracle! 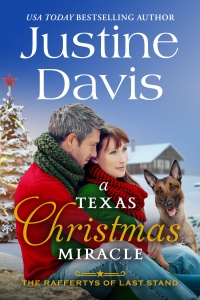 Where did you get the inspiration for A Texas Christmas Miracle?

From images I’ve never forgotten. One, of the Military Working Dog Teams National Monument at Joint Base San Antonio-Lackland in, appropriately, Texas. The sculpture is of a handler and four dogs (a Doberman pinscher, German shepherd, Labrador retriever and a Belgian malinois, the breed featured in the book) done by brilliant sculptor Paula Slater. Second, also by Slater at the same location, is the sculpture of a Vietnam era soldier pouring water into his helmet for his loyal dog. (the sculpture is a functioning fountain for visiting dogs to drink from, a beautiful touch) The dogs back then were considered nothing more than equipment, and were often left behind, abandoned to their fate in a war torn country, in a culture where they were sometimes considered food. That is a part of our history that has always sickened me, and thus while the first monument makes me nod in approval, the fountain makes me cry. And from the beginning, I knew Chance would be a man who would see to those who saw to him and his brothers in arms.

This story is about Chance and Ariel, but it’s also about Tri, a wounded military K-9 who brings these two together. Are you a dog person? Do you or did you ever have any pets?

As you can see, this story is very much about Tri as well. I love these dogs; they’re such brave and wonderful—and smart!—animals. I am absolutely a dog person, and have had several through the years. (horses too, but that’s another story…) Currently I have my beloved Elf, a half border collie mixed with something unknown but thankfully much less intense. I adopted her from a Navy guy who sadly had to rehome her, and after a period of adjustment, she’s become the sweetest thing in my life. She spends the day in my office with me while I work, and in fact has been known to bound up the stairs, then stop on the landing and give me the side eye until I get moving up there fast enough to suit her. I swear she’s saying “Aren’t you supposed to be working??”

If you could spend the day with Chance or Ariel, who would you choose and what would you do?

Oh, undoubtedly Chance. (I’m an all about the hero kind of girl…) But I would love to watch him work with the dogs, see how he settles them and calms them and convinces them they’re safe. The combination of command and gentleness is irresistible to me. That is definitely my kind of man.

Since I spent so many years in law enforcement, where Christmas was just another day we had to work, those kind of fell by the wayside except for Christmas cookies and eggnog. Oh, and a Charlie Brown sort of Christmas tree, a tradition that began when one year we saw one on a trash pile on the morning of Christmas Eve and I couldn’t resist bringing the poor thing home. But I always used to volunteer to work Christmas mornings so that the folks with little kids could be at home with them. I got my payback on New Years!

At the moment I’m doing an editing read-through on the final Rafferty book, and when I’m doing that I have to focus on that book and not read anything else, so that I don’t miss something. However just prior to that, I finished Dean Koontz’s (speaking of dog lovers!) fabulous “Nameless” series of novellas. I don’t do horror but these aren’t, they’re about adding fairness and truth to the lives of people who have been deprived of both by others, and they were fascinating and wonderfully written. I both wanted to read them one right after the other, but also didn’t want them to be over, which for me as a reader is the best compliment I can give. And not to name drop, but Mr. Koontz happens to live in the city I used to work in, and the man works late! I found this out working the graveyard shift at the PD when he would trip their house alarm by accident, and call to say all was okay. Usually around one or two in the morning. When I get on a roll myself and work late, I always think of those brief chats we had. 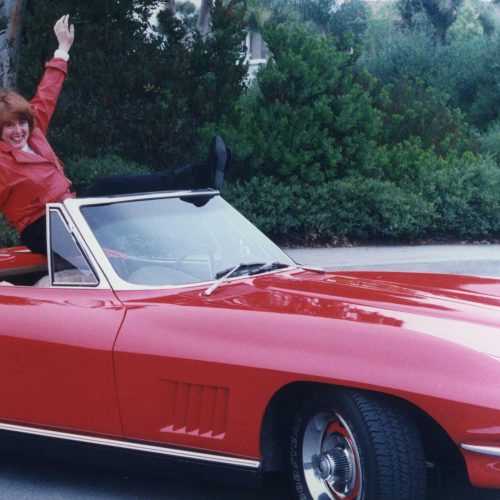