An Unsuitable Boy is the third book in my Misguided Masala Matchmaker series, and even though it is the third of four, it is the story that filled my head first. 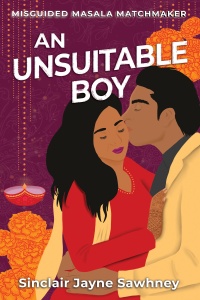 I loved the idea of a beautiful, intelligent, accomplished heroine, who’d always been the family pleaser and role model for the large Indian community, face—for the first time—rejection, perceived failure, and public humiliation. Her downfall is not at all her fault, yet it burns her psyche and hits her confidence hard. Asha Kapoor has always been the role model for her two sisters, and extended family, as well as many children in the Charlotte Indian community. As a teen she was a tutor and an assistant Hindi instructor at the Hindu Center, an accomplished dancer at the Festival of India and many celebrations and parties over the years, and always, always a top student and the first to jump in to help. And yet, when her groom by arranged marriage backs out their three-day wedding–billed as the social event of the year just a couple days before it’s due to begin–Asha becomes the subject of painful gossip.

So many of my stories deal with personal transformation. Asha is all about the head and the heart. She’s quite disconnected from her body. She’s never had a truly sensuous experience. Nor does she know how to relax, take a vacation, or even flirt with a date. She’s all about work—she’s a high risk OBGYN in a. thriving practice, and while her work is her passion, she has always wanted a to have a family of her own. But at thirty-six, she knows from professional experience, her fertility window is closing, which is why she agreed to an arranged marriage with another doctor, who seemed like he would be a good friend as well as father.

When the wedding is called off, Asha is not broken hearted about her groom, but more about the loss of her dream of a family. She has no idea how to move on. She’s in the community limelight for all the wrong reasons, and she feels she’s let her parents down. She wants to hide, and yet, she’s our heroine. She needs to put on a brave face for her family, who worries about her. This moment—picking yourself up–always fascinates me as an author.  What will push Asha out of her rut and out of her head. How can she realistically rise up and retake her power.  I wanted her to have agency, and yet the premise of the whole series is that Asha’s youngest sister, Rani, is a budding matchmaker, who matchmakes her cousin, sisters and finally herself, by screwing up. And that’s when I created a literal kitchen fire to symbolically burn down the barriers between Asha and her future love.

So, who would be perfect for Asha? A man who on the outside seems completely unsuitable. Just as Asha is a princess in the Indian community, Dhruv Narula, is the despised and feared pariah. He’s everything Asha isn’t. He struggled in school, was often in fights, and by the time he was a young teen, he was the bad boy example many in the Charlotte Indian community warned their children about. And even though Dhruv returns to Charlotte a decorated former soldier, and quickly builds a new career as a fire fighter and opens his own boxing and martial arts-based gym with several army buddies, the community continues to reject and judge him by his past.

Family and community admiration and acceptance is so critical to Asha, but for Dhruv, he long ago stopped caring what anyone thinks. And they think a lot. Dhruv is now thirty. Tatted, cut, swaggeringly sexy, unapologetic and blasting around downtown Charlotte on his Ducati. He epitomizes bad ass bad boy, and Asha has zero will power to resist him. Their relationship starts off as a secret, but can Asha find the courage to publicly claim the man of her dreams?

Hope you enjoy An Unsuitable Boy. I know I shouldn’t play favorites, but I think that Dhruv is one of my most appealing heroes. He was so hurt and yet so kind, so strong and yet vulnerable that I have have had trouble letting him go even after writing three more books. 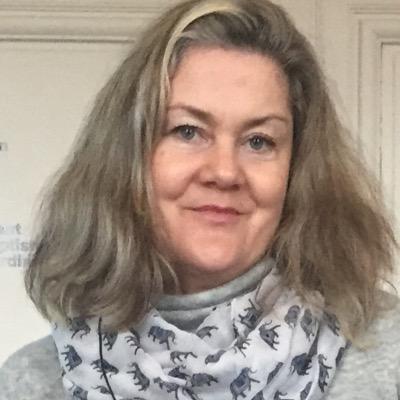 Sinclair Sawhney is a former journalist and middle school teacher who holds a BA in Political Science and K-8 teaching certificate from the University of California, Irvine and a MS in Education with an emphasis in teaching writing from the University of Washington. She has worked as Senior Editor with Tule Publishing for over seven years. Writing as Sinclair Jayne she’s published fifteen short contemporary romances with Tule Publishing with another four books being released in 2021. Married for over twenty-four years, she has two children, and when she isn’t writing or editing, she and her husband, Deepak, are hosting wine tastings of their pinot noir and pinot noir rose at their vineyard Roshni, which is a Hindi word for light-filled, located in Oregon’s Willamette Valley. Shaandaar!