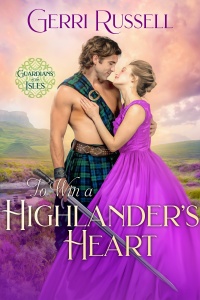 History is filled with unsung female heroes who not only took care of hearth and home, but also brandished weapons, fought in battles, and proved not only their physical strength, but mental abilities. They proved they were just as capable of leading armies and protecting their kin as well as any man, all while defying gender norms.  There are many notable examples such as Ana Nzinga, Zenobia, Lozen, Artemisia, Tomoe Gozen, Queen Teuta, Joan of Arc, Margaret Ann Bulkley, Lady Triệu, Boudica, Grace O’Malley, and the list goes on and on.

I want to highlight four brave women in Scotland who are often not mentioned in the history books who should also be remembered for their bravery, cunning, and daring feats. I’ll talk about each of them below. I used these women to form the basis for my heroine, Isolde Nicolson, in To Win a Highlander’s Heart. Isolde is a warrior, as good at her craft as any Scottish male. He was determined, loyal, brave, all while still maintaining her femineity. 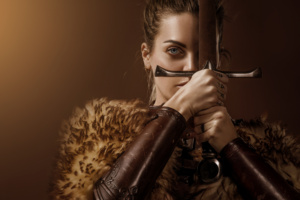 This warrior woman comes from myth and legend which often have a foundation in truth. Scathach’s name translates to “the shadowy one” in Gaelic and with good reason: Scathach was a woman warrior you did not want to trifle with.

Legends claim that she trained warriors in battle skills mixed with martial arts at her covert school, so covert in fact, that if you wanted her to teach you, you had to find her first. Her fortress sat on the Isle of Skye northwest of Scotland. But reaching the fortress was just the beginning: Scathach’s impregnable castle had a gate that was guarded by her fearsome daughter, Uatach.

Scathach’s training regime was as difficult and deadly as the journey to her island. She imparted on her trainees how to pole vault over a castle’s walls, fight underwater, and use a special weapon of her own making called a gáe bolg, which was a barbed harpoon.

It is said that she trained the Ulster hero Cúchulainn, after who the Cuillin mountains are named. He sought out Scathach when his future father-in-law made it a condition for marrying his daughter.

In addition to training scores of great heroes and warriors, Scathach also became the goddess of the dead. If a warrior was strong enough to defeat her in mortal combat, they could enter the Land of Eternal Youth as a reward for defeating one of history’s greatest women warriors.

Lady Christian Bruce was the older sister of Robert the Bruce and after spending six years as an English prisoner played a vital role in the Wars of Independence, leading the defense of an Aberdeenshire castle against British forces.

Lady Christian’s third husband was Sir Andrew Murray who was appointed Guardian of Scotland after Robert the Bruce’s death in 1329. Sir Andrew was a vital figure in the second War of Independence against Edward III, who wanted to install Edward Balliol on the Scottish throne.

In 1335, English forces besieged Kildrummy Castle in Aberdeenshire. The defenders were commanded by Lady Christina Bruce, who held out until reinforces marched north and defeated the English at the Battle of Culblean.

Following that victory, Lady Christian continued to play an important role in Scottish politics until her death in 1357 at the age of 84. 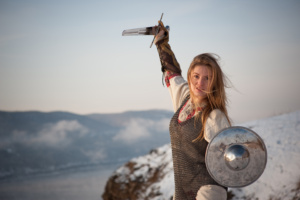 Lady Anne Mackintosh was the wife of the chief of the Mackintosh clan who played a prominent role during the 1745 Jacobite uprising. Anne married Angus Mackintosh at the age of nineteen. He was a captain in the Black Watch, a fighting unit the English government raised from loyal clans to police the Highlands in the aftermath of the 1715 Jacobite uprising.

Despite her husband’s affiliations, Lady Anne’s sympathies lay with the Jacobite cause. When Bonnie Prince Charlie raise his standard at Glenfinnan, Anne rode around the clan lands, wearing a tartan riding costume and carrying a pistol. She raise over three hundred and fifty Farquharsons and Mackintoshs to fight with the Clan Chattan regiment in the Jacobite army.

During the uprising, Captain Angus Mackintosh fought on the losing government side at the Battle of Prestonpans in 1745 and was subsequently captured. He was later released into the custody of his wife. When they met, she greeted him with “your servant, Captain.” To which he replied, “your servant, Colonel.” And although Anne never actually led troops into battle, the nickname has stayed with her through history.

After the defeat of the Jacobites at Culloden, Anne was arrested by government troops and held at Ulster Castle for six weeks. She was later released without charges into the custody of her husband. Despite their support for opposite sides during the 1745 uprising, Anne and Agnes lived contentedly together. Anne is known as the only female military leader during the 1745 uprising and the first female to hold the rank of colonel in Scotland.  She died at the age of 64.

Lady Agnes Randolph faced down an English army without ever raising a sword and won. She was called Black Agnes because of her dark hair, dark eyes, and olive skin.

Agnes married Patrick Dunbar, 9th Earl Dunbar, 2nd Earl of March. She was his second wife. One of the earl’s castles was the formidable fortress of Dunbar near Berwick. The castle was seen as the key to the southwest of Scotland. Edward II had been keen to capture it, and the earl had even leveled it to the ground to keep it out of English hands. After that, he rebuilt the castle and by 1338 the castle was completely restored as a mighty fortress.

Despite Scottish victory at the Battle of Bannockburn in 1314, the English had not given up hope of conquering Scotland. Edward III wanted desperately to oust David II, Robert the Bruce’s son, from the Scottish throne and replace him with the much more pliable Edward Balliol, the exiled King John Balliol’s eldest son. While the Earl of March was away on military duty with the king in the north of Scotland, leaving Lady Agnes and a handful of men to hold Dunbar. Edward III sent his best men to attack Dunbar.

Willian Montague, Earl of Salsbury, descended on Dunbar with his army and demanded its surrender. These men thought victory was imminent since Berwick had already fallen and the castle was only held by a small contingent of men and a woman. Salsbury was shocked when Agnes told him no. In response, Salsbury began his siege, bombarding the walls with boulders and lead. Agnes instructed her warriors to save the boulders then paraded with her ladies in their best gowns and dusted the ramparts with lace handkerchiefs, astonishing the Englishmen below and angering Salsbury.

In retaliation, Salsbury brought out a battering ram and pounded the gates, but the boulders that they had previously been launched at Dunbar were returned on English heads from a great height. When force didn’t work, Salsbury tried to bribe a guard to open the castle gates. The guardsman kept the money but told Agnes immediately. Salsbury’s small band of men almost got trapped in the castle but hey escaped. Agnes taunted him as he fled, “Fare thee well, Montague, I meant that you should have supped with us and support us in upholding the castle from the English.”

So Salsbury settled in to wait. He would starve them out. What he didn’t know was that there was a secret door where men and supplies were replenished by Sir Alexander Ramsay of Dalhousie. After the castle was resupplied, Agnes gave the English a gift of a fresh loaf of bread and a bottle of wine.

As a final straw, Salsbury captured Agnes’s brother and presented him before her with a noose around his neck. He claimed if she didn’t submit, her brother would hang. Agnes called back that he should do it with her thanks as then she would inherit her brother’s titles and land.

Five months later, the Earl of Salsbury was defeated. He negotiated a truce and marched away with Dunbar still in Scottish hands. The only victory Salsbury had at Dunbar was to write a song about his nemesis. “She kept a stir in tower and trench, That brawling, boisterous Scottish wench, Came I early, came I late I found Agnes at the gate.” 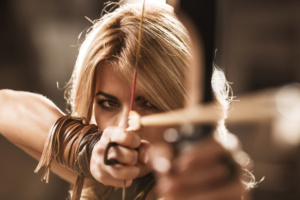 These are but four examples of determined Scottish women who were willing to defy gender expectations for the sake of their homeland. The lesson here is: do not mess with a determined Scottish woman. If you’d like to read about another fictional warrior woman, check out Isolde Nicolson in To Win a Highlander’s Heart. 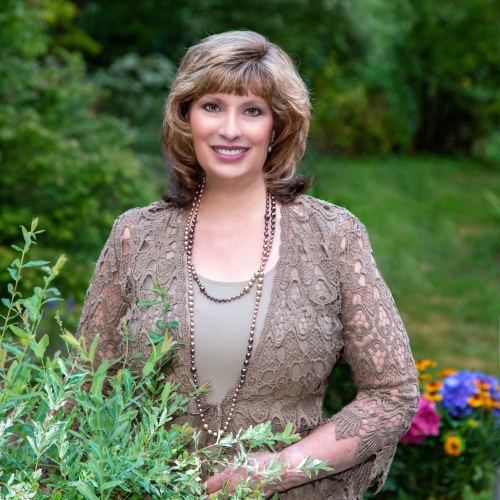