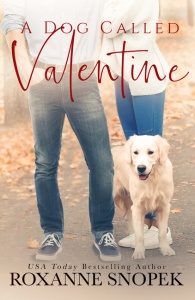 Author Roxanne Snopek was kind enough to chat with us about her new release A Dog Called Valentine in today’s Tule Author Q&A.

Your secondary character Harpreet is hilarious right off the bat. Who was your inspiration for her?
I love Harp, too! I knew I wanted Lily to have some really good friends. I knew I wanted at least a couple of them to be already happily paired up, and thus, wanting the same for her. I liked the idea of mentioning the kind of matchmaking that occurs as a matter of course in other cultures, ie: arranged marriages. So, Harpreet appeared. She is married to a man she loves, whom she met through her family, a complete contrast to the experience Lily has with her mother’s set-ups. Western culture isn’t as open to this, what with the romance of love stories like Romeo and Juliet and all. But look how that one ended! Happily-ever-after can come about in many different ways.

Gotta ask: How many dogs do you have?
We have only one right now, a ten-year old white miniature poodle named Gemma, aka “Fluffy-Puffy girl” aka “Mama’s Precious Angel,” aka “Gemma-Wemma.” I joke about the poodle stereotype but I adore the breed. They are brilliant, sensitive and incredibly loving. Gemma actually belongs to our youngest daughter, a gift on her fourteenth birthday. I knew Gemma would likely stay with us when D3 moved out, but I figured it was a sneaky way to get her home to visit!

For many years, we had three dogs: Gemma, our beloved miniature poodle Myshkin, who I miss dearly, and an adorable Cavalier King Charles spaniel named Addie, who belonged to D2. (D1 never asked for a dog, though we currently have her cat as hostage living with us.) Our first dog was a retired racing greyhound, a sweet skeletal soul that lived with us for twelve years. I expect we’ll have more dogs and likely more cats one day, when the time is right. Competing in agility with Myshi was one of the most fun things I’ve done in my life. 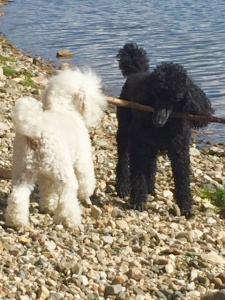 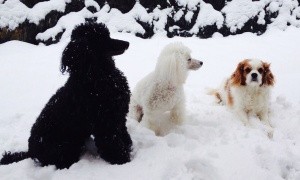 What do you think Shane’s favorite book would be?
Shane’s favorite book. What a great question! I think it would be Watchers, by Dean Koontz. It’s a big, dark, good vs. evil story with military experiments-gone-wrong and one of the best dog characters I’ve ever read.

What (up to now) has been your best Valentine’s Day (or Galentine’s Day)?
Every Valentine’s day I can be with my hubby is the best! (AWWWW, I know, I know!) Okay, we don’t often do gifts but one year, I was going through a rough time and he surprised me with a Happy Valentine’s Day balloon attached to a gift bag. Inside the gift bag was a package of my favorite treat: Miss Vickie’s salt and vinegar potato chips, an indulgence I rarely allow myself and was just what I needed! 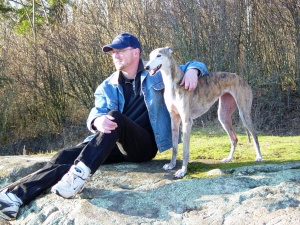 What are you currently reading?
I’ve got several books in progress on my Kindle. I’m very much a mood-reader so different books work for me at different times and I often set something aside, and return to it later. I’m currently reading The Red Tent by Anita Diamant and The Knitting Circle by Ann Hood. 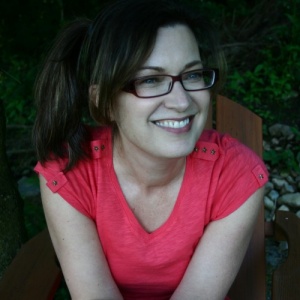 Born under a Scorpio moon, raised in a little house on the prairie, USA Today Bestselling Author Roxanne Snopek said “as you wish” to her Alpha Farm Boy and followed him to the mountain air and ocean breezes of British Columbia. There, while healing creatures great and small and raising three warrior-princesses, they found their real-life happily-ever-after. After also establishing a successful freelance and non-fiction career, Roxanne began writing what she most loved to read: romance. Her small-town stories quickly became fan favorites; print editions of her latest series were recently launched in France.