I hope you are doing well in these trying times.

I live in California, which, sadly, has had more than its share of wild fires recently. As I write this blog, my eyes are watering and a weight on my chest reminds me not to step outside. Gray-brown smoke has become our new norm, but I’m hopeful that by the time you read this, our nearby #Creekfire will be under control, and all the other blazes across the west will be out.

One of the beautiful things about writing a series set in Montana is…it’s set in Montana! The air there is clean and clear, and the clouds indicate weather changes by virtue of season—not impending evacuation. Yes, disasters happen in every state, but right now in certain parts of California, we have three seasons: Winter, Spring and Fire. Sigh.

This summer, my daughter visited western Montana—not far from Marietta. Here are few images she took that added to my sense of place—and to my escape–while I was writing my new release: ALL THE STARS IN MONTANA.

Whether I’m writing or reading a book, the setting becomes my virtual reality. And much the Property Sisters of Montana series is set in one of my favorite Montana towns: Marietta.

With this series, I added a new place of business in downtown Marietta: Brandel’s Baubles, Treasures and Fine Art, which was introduced in MONTANA BLUEPRINT FOR LOVE, became a centerpiece of MEET ME IN MONTANA when heroine Amber fell in love with the store—and the owner’s son, and also plays a role in ALL THE STARS IN MONTANA. 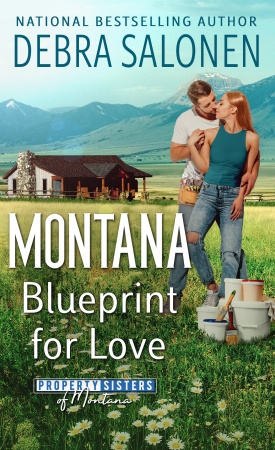 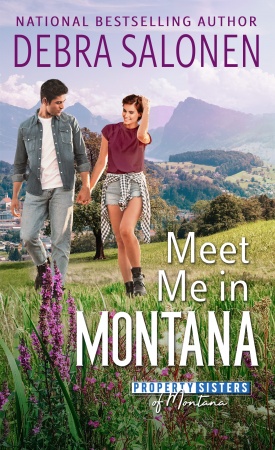 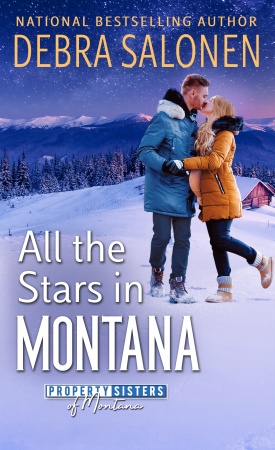 Here’s a snippet from this book:

Jade couldn’t remember ever being this nervous around Zach. He seemed right at home in her old hometown—more than she had any of the times she’d come back since Dad’s health scare. “What time is check-in?”

He glanced at a black-and-lime green, rugged-looking watch that didn’t look like his normal style at all. “Three. Have you stayed at the Graff?”

She made a raspberry. “Time and money conspired against me. As did the fact my mother would disown me if I came to town and checked into a hotel. But I’ve eaten there, and they did a great job on Ruby’s wedding in the courtyard. I wrote a glowing review on Yelp.”

“I probably read it. I like getting the lay of the land before I arrive in a new place.” He stopped at Baubles’s oversize picture window to study the whimsical, yet classy, display that included a rope hammock stretched at an angle with an arrangement of summery items: fishing poles, rusty roller skates, a red, white and blue tricycle, and a scattering of hardback books. “Reading in a hammock on a summer day. What a cool idea,” he said before taking a step back to look upward at the second story. “Brandel’s Baubles, Treasures and Fine Art. It’s just how you described it. I wonder if Amber bought any of Darel’s camels. We should go in and see.”

“Another time?” Jade knew her mother was scheduled to work today, and she’d been avoiding her parents since her arrival for a reason. Her sisters didn’t call her a “blabbermouth” for nothing. “Did I tell you the second-floor apartment remodel is being changed to commercial space to house the offices of Trey’s new digital magazine?”

As in…he’s the one who suggested getting a grant for the work. Duh? What is wrong with my head? ‘Baby brain’? She’d heard Ruby and Amber use the term to explain their current lapses in memory or normal thought processes. Just what I need. More mental challenges. As if having a butterfly brain wasn’t bad enough, now I really could be pregnant.

She watched him run a hand across the building’s quarry rock exterior. Weather and age had added to its stature. A shiver passed down her spine, as though he were touching her. She loved his hands. His touch. Him?

She looked away, not ready to answer that sixty-four-million-dollar question.

“I’m glad Property Sisters picked this building as a project. Every fine lady deserves a facelift.” He did a slow three-sixty. “And you can’t beat the location. I’ve always loved the idea of converting existing space into something fresh and new. Very European. This should be a nice boost to the overall rebirth of the downtown area. What do the locals think? Progress can be a tough sell in some parts of the country.”

The question made her stop dead. “I…I don’t know. The newspaper did a nice feature on Ruby and Boone’s new ‘Right-Size’ homes.” She frowned as she watched traffic pass. Mostly trucks and all-wheel vehicles. Is that a Prius? Ruby drove a Prius before she and Boone got married. But nothing about the cars or the pace hinted at progress and change. “I was in such a hurry to leave Marietta, I honestly haven’t given my hometown much thought over the years. I’d come back for the holidays, of course, but Dad’s health crisis was the first time I’d stayed for longer than a day or two.”

He took her hand again. “From an outsider’s viewpoint, I’m picking up a good strong revivalist vibe here. And it hasn’t snowed once since I arrived.”

“You mean three hours ago?”

In another scene, Jade and Zach meet for lunch at the Main Street Diner—a very popular and frequently visited location in Marietta. (In my very first Tule book, MONTANA COWBOY, an important scene that introduces the hero from second book takes place here.) Here’s a quick snippet. Who doesn’t love Flo?

“Hello…Gabriella,” Zach said, when he spotted the embroidered name on the hostess’s uniform. “I’m supposed to be meeting a friend…” He hooked the bow of his sunglasses into the gap of his three-button Henley and nodded toward a blonde sitting alone in a booth halfway across the room. “That girl.”

She picked up two laminated menus and set off at the snappy pace of someone who was there to work and get things done. As he followed, Zach cataloged a few first impressions: the Main Street Diner was clean and bright with a sort of modern Old West vibe, exposed brick, and an old-fashioned counter with stools at the back. Every spot was filled too. That—and the lack of parking out front—spoke for the viability of commerce in Jade’s hometown, which, he had to admit, gave off a certain hospitable western charm.

“Here you go,” Gabriella said, waiting for Zach to sit before handing him a menu. “Enjoy.”

His heart almost leapt out of his chest when he looked into Jade’s anxious, worried eyes. “Hello, beautiful. You remind me of someone I know in California. Mind if I join you?”

She gave him a dry look. “Has that line worked for you before? And”—she leaned sideways to glance under the table—“what’s with the hiking boots?”

He shrugged. “I don’t own a pair of cowboy boots. But somebody—you, I think—told me it snows here a lot.”

The sparkle of amusement in her silvery-green eyes made him want to lean across the table and plant a big “She’s mine” kiss on her perfect, pink lips. Unfortunately, their waitress chose that moment to drop two sweating glasses of water in front of them. “Hello, folks. What can I get’cha to drink?”

The woman was no spring heifer, as Jade might say. Her beehive hairdo seemed straight out of another decade…or ten. But her friendly smile made him feel welcome. Until she turned her attention on Jade and said, “Well, lookee here. It’s Jade McCall, isn’t it? I haven’t seen you in forever and a day. How are you?”

Jade’s gaze shot to the woman’s chest, but a thin sweater with three-quarter sleeves covered her nametag. The panicked look on her face said she didn’t have a clue to the woman’s identity.

Zach stuck out his hand. “Hello, there. Zachary Masters. And you are?”

Jade’s eyes sparkled with amusement and gratitude. “Flo. Nice to see you again. You’re right, it’s been too long.”

Flo glanced back and forth between them. “Guess you’re back for that TV business I’ve been hearin’ about. Is he the…what do you call the main star? The talent?”

Jade’s cheeks turned pink. “He’s very talented, but he’s not in the show.”

Jade rolled her eyes and said under her breath, “One can dream.”

“Me, too. Gotta keep my wits about me where this one is concerned,” he added for Flo’s benefit.

Jade’s shoe connected with his ankle. Hard. He was glad he’d chosen to wear hiking boots.

Wouldn’t you love to meet up at the Main Street Diner for lunch some day? We could talk about books and catch up on all the news in Marietta. I wonder what those Zabrinskis are up to now? I would order the same thing Jade did: bacon burger with sweet potato fries. Tell me in the comments below, what would you order for lunch at the Main Street Diner? Live large, I’ll pick up the tab. ;-)

And to celebrate my new release, I’ll pick also one winner from those who respond to receive a $10 Amazon gift card. (GIVEAWAY CLOSED)

Happy reading, my friends. Stay well and please pray for all those amazing firefighters and first responders working so hard in all the critical areas across the country and especially on the West coast. 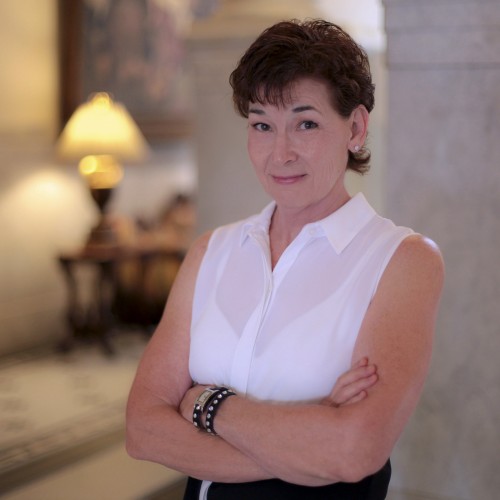