I love chatting with readers and fellow authors about which they prefer, standalone novels or series. The answer is always mixed. People love both for different reasons. A Fearless Fairytale is the first series that I’ve ever written. And I have to say, I’m having a ball watching my heroine evolve with each novel. 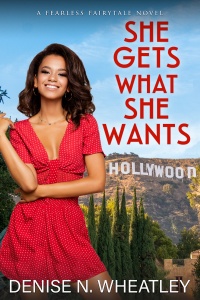 Book 1 in the series, She Gets What She Wants, tells the story of Devon Jacobs, a small-town living, aspiring television writer whose dreams are way bigger than her confidence level. After getting her heart broken by her longtime crush, she throws caution to the wind and moves to LA to pursue her goals.

After I wrote that book, I thought I’d told a complete story. But then I realized that there was more to Devon’s life that needed to be explored. What happens after her dream of becoming a tv writer comes true? Does she make it in the business? And what about her burgeoning relationship with Ryan Roberts, the actor who she starts dating at the end of the novel? Does their relationship work out? And then there’s Devon beloved best friend, Gabby, who’s newly engaged and pregnant at the conclusion of She Gets What She Wants. Even I wanted to know what happens with her character after the book ended. 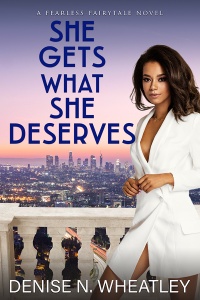 So needless to say, there was a lot of life left to this story. And I am so pleased with how my characters continued to grow in Book 2 of the series, She Gets What She Deserves. At this point, the hero, heroine and secondary characters have taken on a life of their own. They tell me where their storylines should go next. And as the tagline of She Gets What She Deserves says, some fairytales come with a plot twist. This book certainly did.

If you haven’t had a chance to read She Gets What She Wants, I certainly hope that you will do so. Once you’re done, I promise you’ll want to find out where life takes the characters next in She Gets What She Deserves. 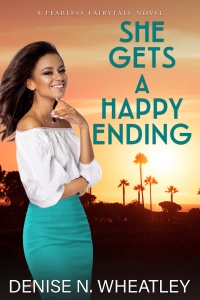 Spoiler alert: I am currently working on Book 3 in the series, She Gets A Happy Ending. This novel is filled with just as many ups, downs, twists and turns as the first two. It also includes a fun spark of Christmas magic. So buckle up and join me on this exciting, fearless ride!