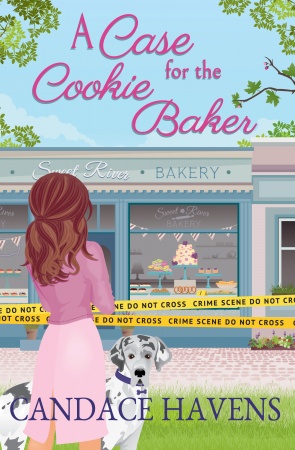 It’s all fun and games until the last cookie crumbles…

Ainsley McGregor and the entire town of Sweet River, Texas, are preparing for the annual summer celebration. And thanks to the extra tourist traffic, Ainsley’s shop, Bless Your Art, has never been busier. Good thing her new friend, Lizzie, has opened a bakery nearby and provides Ainsley and her staff with tasty treats and daily sugar rushes. It’s all cookies and fun, until someone ends up dead in the bakery and her new pal is the prime suspect.

Ainsley is convinced Lizzie is innocent. Unfortunately, her brother, the town sheriff, and her boyfriend, Jake, have some not-so-secret suspicions. With a town full of strangers who just might be suspects, Ainsley finds herself targeted by a killer. Even as her world crumbles faster than a cookie, she’s determined to prove her friend’s innocence—if she can stay alive long enough.

George Clooney coughed in the corner, and I swear he shook his head. I couldn’t blame him. We’d been in Classroom C, upstairs in my shop, Bless Your Art, for more than an hour.

My fellow crafters and I had been discussing what kind of float we should have for the Sweet River Fourth of July parade. Thanks to the mayor, who decided this was a great way for the chamber of commerce to celebrate local businesses, everyone in town was scrambling to figure out what to do. I’d never built a float before, so I thought it might be helpful to get input from all of my vendors.

“We could do a jungle theme,” Mrs. Whedon, my favorite octogenarian, said. “I can knit some cute little monkeys and Don and Peggy can cut some palm trees out of wood.”

Don, who looks like Santa and is usually just as happy, frowned. “I don’t see what the jungle has to do with a shop that sells arts and crafts.”

“And wine,” Mike chimed in. He and my best friend Shannon had a winery at the edge of town.

Mrs. Whedon huffed. “It would at least be more memorable than your suggestion of all of us sitting on hay bales knitting and doing crafts. Besides, I’m old and my bones don’t like hay bales.”

I had to bite my lip to keep from smiling. I glanced down at my phone. It was edging toward six, and it was girls’ night. My friend Jasmine had invited a few of us to come out to her new house to see the work that had been done there.

Carrie, who was sixteen going on forty-five, raised her hand like she was in school. I pointed the cookie I’d been munching on toward her. “What is it?”

She blushed. “I think we can all agree that the biggest celebrity at Bless Your Art is George Clooney. People will come in just to say hi to him. So, what if we did a float of George and then had different things that represent the shop around him.”

For the first time in an hour, there was complete silence. Carrie cast her eyes down to the floor. “Or not,” she whispered.

I wished I hadn’t just stuck the rest of the cookie in my mouth so I could say something.

“You are such a smart young woman,” Mrs. Whedon added. “That’s the perfect float.” If the crankiest person in the room agreed, getting the rest to go along wouldn’t be difficult.

I loved Mrs. Whedon—she was family to me. I called her Gran. She’d made herself my honorary grandmother last Christmas.

Everyone nodded, and a big smile spread across Carrie’s face. “I thought each of us could maybe come up with ideas that represents our arts and crafts,” Carrie said. “I’d say they need to be at least two feet tall and about as wide, so they can be seen from the street. Maybe we could do some sketches and come back next week with our ideas?”

George grunted beside me as if he were giving his approval. All eyes turned toward me.

I swallowed the rest of the cookie and nodded. “If George thinks it’s a good idea, so do I. Though, I’m worried it might all go to his head.”

George sighed, and cocked his head.

“I like Carrie’s thoughts about doing some sketches. It’s late and we should get going.” Finally, I had to get out of here. I hated missing a second of girls’ night.

I’d never had best friends like Shannon, Jasmine and Lizzie. We were almost like sisters, well, ones who got along. Lizzie was the newest member of our little gang. She’s so adorable. When she first opened the shop, for some reason Shannon thought her name was Sheila. It wasn’t until Jasmine asked why she called her Sheila instead of Lizzie that she realized her mistake. When she asked Lizzie why she didn’t say something, she shrugged. “I thought it was a cool nickname or something,” she said.

Everyone filed out of the conference room. George stretched and then tooted. That, mixed with the new perfume Gran was trying out, was not doing my stomach any favors. She had a date with the judge tonight, and had dolled up before the meeting.

“Dude, that is so gross but I’m glad you waited until they left. I’m guessing you need a walk before I drop you off at the firehouse?”

He took off for the back door to the shop, and then grabbed his leash off the hook by the door.

We headed out into the park that followed the river behind my shop. He trotted along happily as if he didn’t have a care in the world.

“Come on, dude. I have places to go, and don’t you want to hang out with Jake?”

He squatted, but was interrupted by a jogger, who was running really fast.

Growling, he lunged at the figure.

He pulled hard on the leash but I yanked him back.

“I mean it. No treats for you if you don’t calm down.”

At the “T” word, he grumbled but finally sat.

My shoulder hurt from where he’d yanked it so hard.

I couldn’t be mad though—he’d been trapped inside most of the day. And was probably hungry and in need of a good run around the yard.

I’d never seen him go after someone like that unless he was tracking a bad guy. He was the kind of dog who usually loved humans a little too hard. Sometimes knocking me over when he leaned in too much.

My phone rang and I glanced down to see who it was.

Shannon, my best friend and favorite coffee shop owner, laughed. She looks like Margot Robbie and is always up for an adventure. “We are all here and were wondering if you had an ETA.”

“I can understand that. It’s our busiest season besides Christmas, and the mayor wants to stop everything to make a float. It’s nuts.”

“So you still have no idea what you’re doing either.”

George started to tug me to the right as we neared the shop. “Stop that,” I said to my Great Dane. “You already hurt my shoulder.”

“George was startled by a jogger. He nearly pulled my arm out of the socket.”

I tightened his leash, but he pulled me toward the bakery and then whined.

“Lizzie isn’t there, silly. No more cookies.” Get Baked, was her bakery. She’d only been open for a short time. The name had created a bit of controversy, but she’d held her ground.

It didn’t hurt that she made the most delicious cakes, cookies, and pies. Lizzie Hernandez had magic in her because her creations were also addictive. I didn’t really blame George. I’d eaten three cookies today. And she always saved a few of the not-so perfect ones for my dog.

“You are not going to believe this house, well, mansion,” Shannon said. “It’s incredible what she’s done already.”

Jasmine, who made candles for my store, and just happened to be a billionaire, had bought her grandmother’s old property here in Sweet River. The plantation-style house had looked like something out of a horror film the last time I’d seen it.

But with Jasmine’s money, determination, and the ability to have crews working twenty-four-seven, I wasn’t surprised the house had gone from a horror movie to something fabulous in just three months.

I blinked. The back door was open to the bakery. “Is Lizzie there with you?”

George did that weird whine that happened whenever something was wrong.

“Ainsley? Where are you?” Shannon asked. “Why is George whining like that? Are you safe? Remember our code word?” We had that word in case we were kidnapped but I couldn’t for the life of me remember what it was.

“Ask Lizzie if her assistant is working tonight.”

“I’m putting you on speaker. Ainsley needs to know if someone is working at the bakery tonight.”

“No. She should have gone home by now,” Lizzie said. There was hesitation in her voice. “What’s going on?”

“The back door is open and it’s dark inside.”

“Oh. No. Do you think someone broke in? Or maybe it’s that door. It sticks sometimes; maybe she didn’t lock it when she left.”

I stood outside the bakery. “Hello?”

“Ains, I’m texting your brother,” Shannon said. “Do not go in there alone.”

“Don’t!” That may have come out harsher than I meant. “Maybe, the door just didn’t shut properly. It happens with these old buildings. No reason to sound the alarm. He’ll kill me if nothing is going on.”

Though, my own alarm system—George—let out a low growl.

I cleared my throat. “Hello?”

“What do you see?” Shannon asked. “And I don’t care what you say, I’m texting Greg.”

“The light panel is right inside the door,” Lizzie said anxiously. “I don’t keep any money there. I don’t know why someone would break in. It has to be the door didn’t shut right. I’m sure everything is fine.”

I wanted to believe her, but my dog was saying otherwise. A shiver slid down my spine.

“George, sit.” I reached my arm in to hit the lights.

I finally found the switch. Slightly blinded by the flash of lights, it took a minute for my eyes to adjust.

I didn’t see anything from the doorway, but George still growled. “Hello?”

I stepped a few feet into the bakery and looked down.

Crud. I wished I hadn’t done that. Acid burned in the back of my throat.

“Someone call my brother,” I whispered. What if the killer was still here? I glanced around so fast, my head started spinning.

Or maybe it was all the blood. I closed my eyes and took a deep breath.

“There’s a dead body on the floor.” Other than it looked like a man, I couldn’t tell much since the person had fallen face down.

“Hey, that’s not funny,” Lizzie said angrily. “I don’t like jokes that are mean.”

“George, stay.” I put my hand up. He whined shrilly but did what I asked. Him trampling on a crime scene wasn’t the best idea.

I took another step inside.

“Ainsley? Ainsley? Are you okay?”

A Case for the Cookie Baker is available in the following formats: 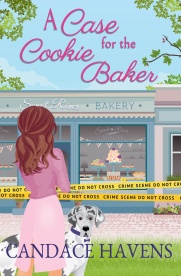 Did you know that A Case for the Cookie Baker and many titles are available digitally from Tule's own bookstore? Check it out!