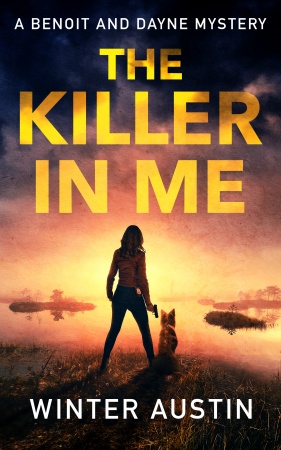 The Killer in Me

What price is too great to stop a killing spree?

Elizabeth Benoit ran for sheriff to wipe out the corruption in the good old boys network of Eckardt County, but she has yet to break in her shoes when a stranger’s body is found in a ravine. With her ex back in town, a new deputy detective on the edge of losing control, and a crooked ex-sheriff out for revenge, Elizabeth’s resources are stretched thin. And then the second body drops.

Fearing a serial killer on the loose, Elizabeth launches an investigation that lays bare more than one family secret: The Kauffmann matriarch is full of advice, but her progeny have a mean streak that leaves a path of destruction in their wake. The Meyer patriarch has his own agenda, and the Kauffmanns have been a thorn in his ambition for too long.

Elizabeth and her deputies are about to face off against odds that are not in their favor. Only one source can tip the scales, but will she sell her soul for his help?

As a child, the adults surrounding Elizabeth Benoit called her listless, a daydreamer. Names meant to cut her to the quick, but she’d owned them, let them define who she truly was as a person. Forty-five years later, she’d become a better woman than those folks from her childhood had expected.

Pressed against the edge of the counter jutting out into the center of her kitchen, she stared at the black liquid, her lifeblood, dripping from the reservoir. It would take more than a pot of coffee to sort out this new mess her intelligence had uncovered. Reaching into the cabinet above the coffeemaker, she pulled out a brown Yeti mug and a green thermos.

The black gold burbled out of the tank. Removing the glass pot, she poured the contents into her mug and then the thermos.

Last night she’d decided to wrap up a particularly turbulent Tuesday at Marnie’s bar. Since winning the election and taking over as sheriff last month, Elizabeth hadn’t seen much of her sister and needed a hit of whatever mojo Marnie exuded in copious amounts. Five drinks and a tottering walk home later—thank God she lived only a block away—Elizabeth was greeted by a surprise. An unwelcome one.

The cadence of an easy swagger punctuated by the metal on metal rip of a zipper preceded the appearance of that unwelcomed surprise. Elizabeth turned as he exited the hallway.

A half-cocked grin, bare chest, and half done up jeans met her. Yep, she’d let his whiskey-honeyed voice and moves seduce her once again. Damn him.

Sighing, Elizabeth braced her body against the counter. “Joel.”

The finely honed Delta Force operative strode past her to take a glass out of the cabinet above the sink and grabbed the half-gallon milk jug out of the fridge. After pouring himself a generous amount, Joel Fontaine, ex-husband, leaned against the sink and downed the entire contents of the glass. Finished, he set the glass in the sink.

“Why are you here?” she asked.

Rolling her neck, she crossed her arms and dropped her gaze to the squared toes of her boots. “You can’t come back from a long mission and expect a booty call every time you visit Iowa.” Her gaze darted back to him. “We’re divorced. Remember?”

Joel pushed off the sink’s edge and inched closer to her, dipping his broad, muscled shoulders so he could meet her gaze dead on. “I didn’t hear one protest out of you before or after.”

Anger snapped through her. “Because I was drunk, you ass.” She pushed him away. “This”—she jabbed a finger between them—“is why we divorced in the first place. Except for the sex, we’re not good together, and even the sex had problems.”

She slashed the air. Whatever sweetness he thought to spew to soften her up ended here. They weren’t teenagers deep in the throes of hormonal lust. Damn it, they were both grown-ass adults and he still thought he could smooth everything over with a few platitudes, a few kisses, and she’d just cave. That special maneuver had stopped working on her a long time ago. “Don’t Ellie me. This can’t happen. Anymore.”

A huff ending with a very dog-like yawn put a pause to their standoff. Bentley, Elizabeth’s red border collie and constant companion, popped up from her second dog bed by the sliding glass door and jogged over to the water bowl. She couldn’t have made her point clearer: “We’re done here. We’ve got work to do.”

Elizabeth gathered up her mug and thermos. “I’m going to the department. I’m putting in a full day of work. When I get home, I expect you gone.” She squared off with Joel, the heat of his body reminding her how good the sex was between them. It was always at its peak right after he got back from a deployment or after a particularly long mission.

“My house, my rules. Crash somewhere else.” About-facing, she snapped her fingers to call Bentley and marched out of the house, letting the doors slam, punctuating the finality to this conversation.

Miracle of miracles, Marnie had dropped off Elizabeth’s vehicle, keys still in the ignition. Letting Bentley hop into the passenger seat, Elizabeth climbed in, got settled, and started the engine. She made the mistake of looking at the porch, finding Joel propped in the doorway, staring at her.

Backing out of the drive, she pointed the truck in the direction of the courthouse and resisted the urge to look back. A part of her, the deeply ingrained part that was well aware of that man’s penchant for disobeying orders he deemed worthless, knew he would not listen to her. Joel would still be there by evening.

Elizabeth didn’t have time for his games. Crashing on her sister’s couch might be the better option.

After she’d won the election and cleared out Sheehan’s mess, Elizabeth had all the locks changed and a select set of keys made that only she and the dispatcher had access to. The state-of-the-art security system she’d managed to wiggle out of the county budget had been installed last week. Each deputy was given a special coded card that allowed only them entry to the main office and holding cells, tracking their comings and goings. Until Elizabeth deemed such time as she saw fit to trust the deputies, they would not be given any undue entry to certain offices and rooms in the department’s portion of the courthouse.

Hot, fresh coffee hailed her as she unlocked the half-beveled glass door. Bentley slinked past Elizabeth’s legs, around the corner, and darted through a second doorway into the main hall, where she was welcomed with a: “Bentley-boo!”

Bentley’s short list of people she didn’t like did not include Dispatcher Georgia Schmidt. Georgia had been Eckardt County’s dispatcher for twenty-three years through two sheriff administrations. She edged out Elizabeth in age by a few years, but no one could tell.

Georgia had a distinct dislike for the former sheriff but never voiced her reasons.

Dropping her load on the organized clutter on her desk, Elizabeth joined her canine companion in the main hall. “Good morning, Georgia.”

A short stack of pink slips sat in the tray marked Sheriff Benoit. Gathering the thin sheets, Elizabeth wandered to one of the desks set up in the office’s corners. “How did Lundquist and Meyer fare last night?” She rotated a file folder ninety degrees to read the typed heading: Eckardt County Sheriff’s Department Budget.

“By all appearances, they did fine.” Georgia rolled her office chair across the floor and joined Elizabeth next to the deputy’s desk. “I still can’t fathom those two boys being old enough to be deputies.” She tapped the folder. “He worked late on that.”

Elizabeth smiled. “We all grow up.” She picked up the folder. “Anything of interest I need to be aware of today?”

“Sheriff, that’s not your job.”

Elizabeth gave Georgia an indulgent smile. “I know, but I won’t win the next election by ignoring my voters.”

Shaking her head, Georgia rolled back to her desk. “You’ve got four years to worry about that. Let’s focus on the here and now. How many deputies do you plan to bring on to replace all the ones who left?”

“As many as I can find room in the budget for.” Elizabeth waved the budget folder as she headed back to her office. “Speaking of which, I’m expecting a visitor sometime today. Let me know when they get here.”

Saluting, Georgia grabbed up the phone as it rang. “Good morning, Eckardt Sheriff’s Department, how may I help you?”

With Bentley at her side, Elizabeth entered her office and closed the adjoining door. The McKinnley complaint was on top of the stack. Easing into the brown leather and brass-studded chair leftover from a long-ago sheriff, Elizabeth read through Georgia’s scrolled notes on the call. Mrs. Neva McKinnley, a stable member of the Eckardt community, was not a woman you disregarded, nor was she one to lodge complaints on a continual basis, according to Georgia. Yes, this situation required the sheriff’s touch.

As Elizabeth shuffled through the messages that had come in overnight, Bentley hopped onto the raggedy armchair Elizabeth had shoved into a corner of the office until she found the time to dispose of it. Hind end tucked into the juncture of the chair back and armrest, Bentley cocked her head, watching. Smiling at her dog, Elizabeth traded the pink slips for the budget folder. She and the county council had an upcoming meeting about her proposed changes.

Georgia’s knock stopped her from opening the file. The door creaked open. “Sheriff?”

Georgia poked her head inside. “You’re going to have to put your morning routine on hold. Deputy Fontaine has called in a 10-107.”

For a month, Elizabeth had been trying to get a handle on these particular codes her ex-brother-in-law, Georgia, and a few of the others used. Having had no prior experience working in law enforcement, Elizabeth found her vocabulary was better suited for military than a law enforcement officer. She was frustrated, to say the least, that she hadn’t had the time to study up on it.

Georgia winced and stepped inside the door. “Sorry, that’s the code for a dead body.”

“Out on the old quarry road, heading toward Three Points.”

“No. Deputy Fontaine is calling this a homicide.”

She froze. A homicide. An unexplained death in a county that hadn’t seen one since Brendette Lundquist’s life was cut short.

Georgia turned away. “Sheriff, the final call is yours on whether it’s a homicide or not. But if Rafe says it is, I’d believe it.” She closed the door.

Here it was—the reason the voters of Eckardt County had chosen Elizabeth over Kelley Sheehan. Her first test.

She would not fail them.

The Killer in Me is available in the following formats: 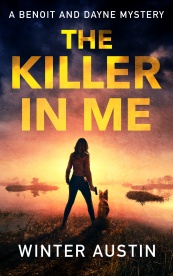 Did you know that The Killer in Me and many titles are available digitally from Tule's own bookstore? Check it out!