With Love, From Kurrajong Crossing, Book 5 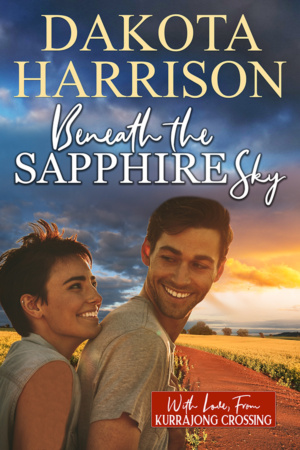 With Love, From Kurrajong Crossing, Book 5

Beneath the Sapphire Sky

They’ve known each other for years…

Born and raised on adjacent family vineyards, and inseparable since childhood, there’s not much Belle Davis and Dante Casellati don’t know about each other. That crush Belle had on him in her teens? Dante knows about it. Dante’s confirmed bachelor stance? Belle’s heard it all before. And each believes the other is happy with the status quo.

Used to pushing aside her own dreams and desires out of duty to her ailing mother, Belle dismisses all hope of her and Dante ever being in the same place at the same time emotionally, until Dante’s prodigal brother returns to Kurrajong Crossing and makes a play for her. Dante’s jealousy finally prompts him to act on the attraction to Belle he’s been ignoring for years. Taking their relationship one step further, life is bliss…until tragedy strikes Belle’s family. As tensions rise and hope of a happy outcome fades fast, Belle’s guilt estranges her and Dante for the first time in their lives.

Can they salvage their love, or will harsh words and the fear of truly letting one another in ruin everything?

Belle closed her eyes and put down the unopened envelope she’d received yesterday.

“Mum, we talked about this. Doc Farrell said you have to exercise. Just a little. Come for a walk with me. Jack’s getting the Mourvèdre ready for the International Wine Awards. We could swing past and talk to him on the way back.”

Jem’s face tightened in a thunderous scowl. “No.” She glanced outside. “It’s too hot. I’ll get sunburned.”

Belle resisted the urge to let out the exasperated sigh just waiting to burst from her lips. If she did, her mother would dig her heels in even further. Instead, she smiled and forced her voice into a cheerful cajole.

“Come on, it’s not even seven AM. It’s perfect out there. We’ll pop your big floppy hat on your head and you won’t notice the sun.”

Although it was true the relentless Australian sun could cook you to a crisp, lobster red, it was unlikely at this time of day. She threw a glance at the digital weather station readout on the wall. A lovely eighteen degrees.

“I said no.” Jem gripped the bottom of the dining chair beside her thighs. She pouted and let go long enough to shove at the still-half-full cup of tea on the table in front of her.

Belle surged forward, only to miss the cup by millimetres. Her heart caught as it crashed to the tiled floor, splintering into a thousand tiny shards of porcelain.

Her mother startled at the sharp sound and looked at the floor. She burst into tears at the mess of tea and broken cup.

“You broke my favourite cup! Why would you do that, Belle?”

Belle gritted her teeth. She’d learned the hard way to not react or try to tell her mother the truth. Jem wouldn’t believe her anyway. She grabbed a dishcloth and knelt to pick up the larger pieces, dumping them into her other hand, then swiped at the small slivers with the cloth. The last thing she needed was her mother stepping on one.

Belle shoved the rising frustration back where it belonged. Her mother couldn’t help it. If Belle was perfectly honest, Jem would be horrified to realise just how far she’d deteriorated in the last year. She loved her mother so much and seeing her memory disappear, almost as if daily, cut her to pieces inside.

“Belle? Can I trouble you for a cuppa? I haven’t had one yet this morning.”

Tossing the now-ruined cloth into the bin, she held her breath at her mother’s words. Her eyes stung. She blinked rapidly and gripped the edge of the ancient steel sink.

She and her brother, Jack, still lived at the family home. They both worked on the vineyard with their father, and with their erratic and sometimes long hours it simply made sense to be there. Why waste money on a rental in town and drive to work when you could just stay here and walk twenty metres?

Looking after her ailing mother also made moving out almost impossible, even if she’d wanted to. Almost all free time she had from the restaurant was spent with Jem, and when she had to work, her mother came to the restaurant with her until her father could take her back home.

The light breeze coming through the kitchen window in front of her soothed her stinging eyes. She folded and tucked the still-unopened envelope into her shorts pocket and pasted a happy smile onto her lips, one that she’d cultivated to perfection.

Belle stepped into the vat shed. She smiled when she caught her father’s eye.

She nodded. “She fell asleep for a change.”

She smiled at Jack, precariously perched on a ladder at the side of one of the huge stainless steel vats.

“You got in late last night.” Her dad’s soft voice held no inflection and drew her attention back.

“This morning. I slept on Dante’s sofa last night.”

Her best friend lived literally over the road. They’d grown up together, spent every free waking moment in each other’s company. Not that they had much of that these days, even living so close, but they tried to get at least one movie night a week at one of their places, just to relax and de-stress.

She shrugged and glanced at Jack. His open grin suggested he knew exactly why she’d stayed at the house over the road. She frowned in his direction then let it wash from her face when her father looked her way again.

“I had a couple of drinks after we watched the movie. Just being responsible.”

Jack made a strange noise. “Yeah, because you’d surely get hit by a car walking across our extremely busy road at two in the morning.” Sarcasm dripped from his voice.

Callum Davis shook his head and turned his back on his son. “I’ll need you on the floor by ten. We have a bus due at eleven.”

He shook his head. “No. I need you cooking.”

Her happiness burst into oblivion. What use was her training as a sommelier if she was stuck in the kitchen? She’d grown up on the vineyard; she knew it all inside out. “But—”

“No buts, Belle. Janie called in sick. That’s where I need you. I’ll supervise the tasting. Dean’s coming in at midday to set up the music.”

While her dad could make a drinkable coffee when pressed, he couldn’t cook to save his life. Unless they wanted food coming back in droves, it was her or no food at all. They’d managed to build up a wonderful reputation both locally and interstate for their weekly Muscat and Music afternoons, although the muscat reserves had been severely reduced due to the lack of a suitable harvest in recent years. A resurgence of love for the older varieties of grape had ensured their success. It was something of a novelty for the busloads of tourists that flocked to the region each week.

“What about Mum?” she asked.

“We’ll take her over to the Barrel. You know how she loves Dean’s voice. Between us and Suze we should be able to keep her occupied until you can take her home again.”

“We really do need help, Dad.”

Her father waved a dismissive hand at her. “We can cope. We do fine looking after her.”

Her father frowned, a shutter coming down over his face. “We’ll talk about it later.”

Belle sighed and nodded. She caught Jack’s head shake as she turned to leave the shed.

She was almost thirty-two and, while she was happy working for the family business and wouldn’t want to be anywhere else, at times it seemed her life might never actually start.

Beneath the Sapphire Sky is available in the following formats: 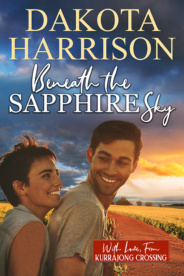 Did you know that Beneath the Sapphire Sky and many titles are available digitally from Tule's own bookstore? Check it out!