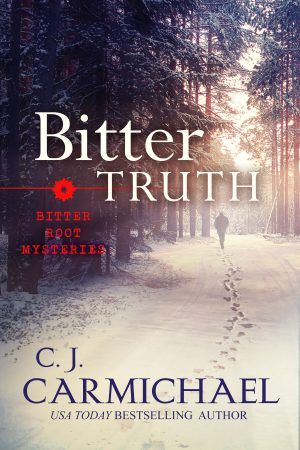 In the isolated ranching community of Lost Trails, Montana, Lacy Stillman, a rich elderly rancher has died of a heart attack in her own bed. What could be more normal than that? As Zak Waller, dispatcher with the local Sheriff’s Office, joins the town in mourning the loss of the community matriarch, some disquieting information makes Zak wonder if Lacy’s death was not what it seemed.

Meanwhile, Zak’s friend Tiff Masterson is overwhelmed by her mother’s escalating mental breakdown and her aunt’s stubborn denial of the problem. Tiff assumes the root of the problem is the death of her brother and father sixteen years ago. But the real atrocity goes back much further than that. When the truth is revealed in a shocking twist, Tiff’s world is turned completely upside down. The ramifications affect many of the most prominent citizens and provide the missing clue to Lacy Stillman’s murder.

Perfect for fans of the British television film Broadchurch.

By midnight it would be done. Irrevocable. There was no reason to feel guilt.

The old woman had lived a long life on the land she loved, and she was leaving behind two sons and three grandchildren to carry on her legacy. If she’d been a different sort of woman she could have relaxed and enjoyed her golden years. But Lacy Stillman was a strong, interfering, opinionated person. And so she had to go.

Zak Waller was at the coffee machine when the call came in to the Lost Trail, Montana, Sheriff’s Office. He’d been about to offer a refill to Deputy Nadine Black, mainly to see if she’d stop communing with her laptop and actually look at him—something she’d avoided doing since she showed up at work two hours ago.

Zak abandoned his mug and leapt over a box of evidence from their last big case to grab the phone. “You’ve reached 911, what’s your emergency?” He grabbed his notepad and pen, ready for whatever was to come.

Deputy Black was also priming for action. In her case this involved checking her gun and slipping it into her holster.

The man on the line said, “Not sure it’s an emergency. I didn’t know who else to call.”

Zak had heard that voice before but no address or name had popped up on the display. Probably the caller was using a cell phone.

Zak had no trouble placing the caller then. The Stillmans owned the largest ranch in the county, and Eugene’s mother, Lacy Stillman, was the wealthiest woman around. Eugene was her eldest son.

“Mom didn’t show up at the barn this morning. She’s never late. I knew something was wrong, but I figured…I figured she’d caught a bug. I never guessed…”

His voice sounded like it was grinding through gravel until it finally choked to a stop. Zak waited for the tough, old rancher to get control. For men like Eugene it was weak to show emotion.

“You check her breathing? Her pulse?”

“She’s already cold. Must have had a heart attack. I didn’t know whether to call 911 or Doc Pittman.”

“You did the right thing, Eugene. I’m sorry for your loss. Are you alone at the house?”

“Yeah. I need to tell my wife and my brother. But I thought I should report the death first.”

“Definitely. We’ll handle things from our end now. Call your family and get someone to come over and keep you company while you wait for the paramedics to arrive.”

“What’s the story?” Nadine Black towered over his desk, vibrating with anticipation of a juicy emergency. The fitness she’d gained in her years of competing in barrel racing still showed in every muscle of her body.

“Lacy Stillman had a heart attack in bed last night.” A part of him was still absorbing the news. Just yesterday she’d invited him for a beer after her annual checkup with Doc Pittman. It wasn’t like they were drinking buddies or anything. He just happened to cross her path at the right time. She felt like celebrating, she said.

And now she was dead.

Nadine deflated, dropped back on her heels. “I take it this Lacy Stillman was old?”

“If you call ninety-one old.”

Nadine acknowledged the humor with an almost-smile. “Even if ninety is the new eighty, it’s still old.”

Encouraged by the moment of rapport, Zak considered asking her about last night, why she hadn’t shown up at the Dew Drop as planned. But she was already back at her desk.

He eyed the stiff set of her shoulders a few seconds longer, then dialed Doc Pittman, the county coroner.

“Sorry to hear that,” the doctor said after Zak delivered the news. “I know Lacy was old, but she was one of those people you expect to live forever.”

“That’s for sure. I ran into her after her appointment with you yesterday. She was pretty pumped. Said she had a great checkup.”

“Lacy had more energy than someone half her age. And no obvious health issues. But there are no guarantees once you reach your nineties. Send the paramedics out to the ranch, Zak. I’ll do my exam here at my office.”

Zak wanted to argue the point, for reasons that were slowly coalescing in his mind, but he was just the dispatcher. So he did as instructed.

Once the paramedics were on their way, he went for the coffee he was craving now more than ever. He had work to do but thoughts of Lacy wouldn’t leave him alone. “I saw her yesterday.”

Nadine glanced up from her computer screen. The old radiators clicked and clunked, the sounds loud in the quiet office. Sheriff Ford was in Missoula for the day and Deputy Butterfield was patrolling the Bitterroot Forest Preserve. Not much else was going on. A normal state of affairs in this sleepy corner of Montana.

“You talking about the old woman who died?”

He ignored the marked lack of interest in Nadine’s tone. “Lacy was leaving the medical clinic when I was on my way home. She insisted on buying me a beer at the Dew Drop. Said she wanted to celebrate.”

Lacy had been dressed like a rodeo queen with her hand-tooled boots and fitted shearling coat. Petite and sprightly, with alert, bright eyes and an I-love-life smile. No one would guess Lacy was in her nineties. She still led cattle drives every spring and fall and volunteered for the 4-H club.

“Lacy told me she got a clean bill of health and a vitamin K shot for good measure. She figured she was going to live another decade for sure.”

Nadine gave him the sort of condescending look he used to get daily from his older brothers. “There are no guarantees when you’re ninety-one.”

Which is what the doctor had said. “It’s kind of sad, is all.”

She waved her hand. “You’re too soft-hearted for this job.”

Really? A few weeks ago she’d given him hell for not applying for a deputy position. Now she questioned whether he could handle the dispatcher role—a job previously held by Rose Newman, whose main skill, as far as Zak could tell, had been crocheting doilies for every wooden surface in the office.

On Zak’s first day on the job, the sheriff had tossed those doilies. “Hope you don’t crochet, Waller.”

Zak had smiled at what he assumed was a joke. That was before he realized the sheriff had zero sense of humor.

Unlike Lacy who had an excellent one. Her eyes had sparkled with mischief when she told him her sons were going to be thrilled the doc had green-lighted her continued active involvement on the ranch.

The irony was obvious. It was no secret around town that Lacy’s old-fashioned ideas about ranching drove both Eugene and Clayton crazy.

Then there was the more recent disagreement about selling off a small portion of land to a real estate developer, which Zak had only learned about last night.

“The timing of her death sure is convenient for her sons.”

“Yeah?” Nadine glanced from him back to her computer, a not-too-subtle hint that she had work to do. But she played along. “How so?”

“I overheard a couple out-of-towners talking about the Lazy S at the Dew Drop last night.”

Nadine dropped her gaze when he mentioned the pub.

Huh. She wasn’t even going to offer an excuse for blowing him off. “These guys were talking about a meeting they had with the Stillman family that morning—yesterday morning—trying to convince them to sell off a fifty-acre parcel of land along the river. Apparently the sons were all for it, but Lacy vetoed the deal.”

Nadine straightened, her gaze a little keener than it had been before. “What do they want the land for?”

“A big operation out of California wants to invest in a luxury resort. They’d promote skiing in the winter and fly-fishing in the summer.”

“How much land do the Stillmans own?”

“You wouldn’t think. But it would be a matter of principle with Lacy. Land is everything to old-time ranchers like her. Besides the decision to sell a bit of land could be a slippery slope, making it easier to divest a few more acres the next time an offer presented itself.”

“You’re not seriously suggesting her sons somehow managed to give her a heart attack so they could do this deal?”

Was he? Zak didn’t know the answer himself. But… “When the richest woman in the county dies a day after she blocked her family from making a cool million or two…don’t you think questions should be asked?”

Nadine regarded him for a long moment, then slowly shook her head. “Sheriff Ford will never okay opening an investigation.”

Just last month the boss had practically crushed Nadine for taking too much initiative. She was learning to keep her place.

“No, he won’t open an investigation.” Especially since Eugene and Clayton were generous supporters of his campaign and election time was around the corner.

If Zak wanted to clear his conscience where Lacy Stillman’s death was concerned, he was going to have to find the answers himself.

Bitter Truth is available in the following formats: 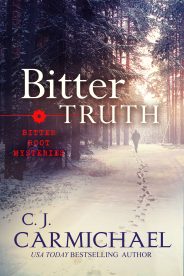 Did you know that Bitter Truth and many titles are available digitally from Tule's own bookstore? Check it out!