Caught in the Current

Retired Marine Jason Hall is a force to be reckoned with. When his nephew Luke is kidnapped by his fresh-out-of-jail father, he knows there’s one woman he can count on to help in the search. The last time he saw private investigator Alexandra Macintyre, they were steaming up the windows of her black SUV. Forgetting the scorch of her lips against his hasn’t been easy, but Jay knows the crippling pain of betrayal far too well.

Alexandra Macintyre is no stranger to tragedy. Haunted by her past, she seeks redemption by helping families find their loved ones, hoping their outcome is different from her family’s misfortune. Alex and Jay make a formidable team as they band together to rescue Luke, but the road trip south tests their emotional stamina. Alex is used to being alone, but Jay gives her a taste of the love and belonging she’s never dared to hope for.

Will Alex be able to make peace with her tragic past for a future with Jay?

Biting February winds howled over the dark, tossing waves and snaked down the neck of Jason Hall’s sweatshirt. The dicey surf mirrored the sickening churn in his gut. It had been seventy-two hours since his nephew Luke was taken. Seventy-two hours since Jason had last slept. He’d scoured every inch of the seaside town his family called home for the teenager who always had a lacrosse stick or baseball glove in hand. Amber Alerts flashed Luke’s picture, one from his last middle school dance.

It seemed like yesterday that Jay had pulled up to the school, crowded with nervous teens, as they waited to get into the gym for the dance. They’d talked and laughed on the ride, and he’d given Luke advice on the best way to ask Shae Brigham to slow dance. Now, Luke’s freckled face flew across television screens throughout the region, but the hours ticked by with no new information.

Jay was done sitting on the sidelines while his baby sister cried jagged tears. Done seeing the helpless devastation in his aging parents’ eyes. He drew in the salt-laced air. It did nothing to cool the burn in the back of his throat. It was up to him to find Luke now.

A low bark made him glance over his shoulder. He’d called on all his resources to help in the search. Fellow veterans and brothers-in-arms were on the hunt, but the badass private investigator taking purposeful, no-nonsense strides across the beach was his greatest hope of finding Luke. A beast of a dog walked dutifully at her hip. Dark clothing clung to her slim frame, accentuating every subtle curve, and a weapon was holstered at her hip.

He patted the solid Beretta concealed under his shirt and relaxed his shoulders, forcing the stiffness there to subside. Alex Macintyre was petite but she carried herself with power. The first and last time he’d seen her they’d been steaming up the windows of her black SUV after they met by chance over dinner with mutual friends.

Fiery red hair slapped against her jawline as the impending storm rolled to a boil overhead.

“Talk to me,” Alex said when she was within arm’s length. They began walking down the shoreline together, hip to hip.

“My nephew’s thirteen. He was taken by his biological father on Friday during an unauthorized visit at my sister’s house.” Jay pulled out his wallet and handed over a picture of Luke, elbow deep in a banana split.

“And now it’s Sunday evening, and nothing?” She glanced at him and he caught a flash of her bourbon-colored eyes.

Alex stopped and stood solidly next to him. “There’s always a trace.”

A coil of tension between his shoulder blades released, easing the ache there. “And that’s exactly why I called you. I’m not asking you to break the law, but I have a hunch you can pass by some of the red tape holding up the investigation.”

“Tell me more about the father.” Alex kicked a clump of seaweed out of her way as they continued their walk down the beach.

“Lowlife.” Jay grunted. “Just got out of jail for assault and battery. He’s been in and out of prison Luke’s entire life. He did some stints for dealing in front of a playground, breaking and entering, that sort of thing.”

“Sounds like a nice guy.” Sarcasm dripped from her husky voice. “How’d your sister get tangled up with someone like that?”

“Amy started dating Shane in high school. I’ll never forget the day he drove up to our house on his piece of junk motorbike, tracked mud over my mother’s clean floors and insulted the sergeant, then left behind the smell of cigarettes and weed when he and Amy walked out the front door.” Jay shook his head. The guy was a punk then, just as he was now.

“So, military service runs in the family, then?” Alex put a steady hand on the dog’s head as a group of seagulls launched into the air ahead of them.

“Dad had a long career as an E-7 gunnery sergeant. He forbade Amy from seeing this guy, but she went behind his back, and when she got pregnant, Shane dropped out of school.”

He let out a sigh. His parents had approved of his high school sweetheart—a bit too much. They were disappointed when he broke it off after his discharge, and he never could bring himself to tell them what she’d done. It was a small town where gossip flew around faster than a fighter jet. She’d wronged him, but he was man enough not to bad-mouth an ex.

“I’m guessing that wasn’t to play the role of doting father.” The side-eye she shot him made his blood pump faster. Alex was a looker.

“Yeah, he bolted. The pregnancy changed Amy, though. She started being diligent about schoolwork and took good care of herself. When Luke was born, Amy doted on him. She never took advantage of us living under one roof. If she wanted help she had it, but Amy rarely asked.” Jay followed Alex’s lead and stopped a few feet before a jetty. Foam formed around the jagged rocks from the battering water below.

“I’d like to ask her some questions. I know the police have gone over it a thousand times, but I need my own perspective.” Thunder rattled the air around them. Alex didn’t flinch but the dog trembled behind her. Her wide stance mirrored his as they paused for a moment.

“I get it. When can we start the search?” Heat coursed through his body like a flash fire devouring trees and dried brush. He wanted to find that son of a bitch who took Luke and wronged his sister. And if Jay didn’t find his nephew alive and well, Shane would be on his knees praying for the end.

“Now,” Alex said. Lightning electrified the sky, illuminating the hard glint in her eyes. Yes, there was no doubt he’d made the right decision to call her. Like the storm that exploded above them, she was a force to be reckoned with.

Caught in the Current is available in the following formats: 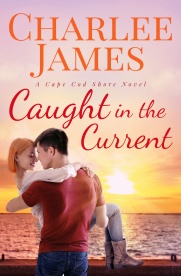 Did you know that Caught in the Current and many titles are available digitally from Tule's own bookstore? Check it out!