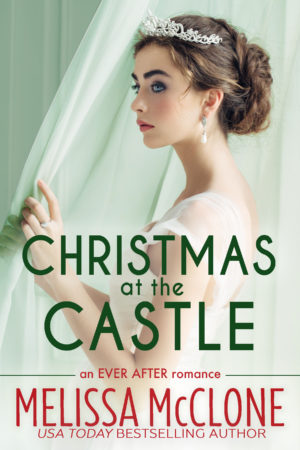 Christmas at the Castle

A royal wedding. A meddlesome mother. An unexpected union.

A European getaway during the Christmas holiday is exactly what veterinarian Katrina “Kat” Parsons needs. She can’t wait to be a bridesmaid in her childhood friend’s royal wedding, but she hopes to steer clear of the bride’s arrogant older brother.

Crown Prince Guillaume wants his younger sister’s wedding day to be perfect, but he’s suspicious of Kat. He and his mother are on high alert, afraid Kat is not just there for the wedding, but also to find a prince of her own.

But when Kat’s kindness and generosity prove them wrong, the prince realizes there’s more to her than he ever imagined. Can he trust his heart or will he lose the one woman he can’t live without?

Katrina Parsons stood on the edge of the dock at Camp KooKoRomo. She’d left her fishing gear—borrowed as an excuse to check out the lake—near the tall grass. If she jumped into the water and pretended to drown, would the counselors send her home?

Camp will be good for you, Kat. You’re too young to be stuck on the farm with a couple of old fogies.

So instead of being with her grandparents, whom she loved, or visiting her parents in Africa, whom she missed, she was stuck spending eight weeks of her summer vacation with kids who thought farting was a group event.

She groaned. Her angst and frustration carried across the mirror-flat water.

This was a ginormous mistake. She was going into eighth grade and should have known better than to agree to come, but she’d been swayed by the glossy brochure with pictures of fun in the sun, s’mores by the campfire, and cute boys.

The ones at her middle school wanted only to copy her homework. They ignored her otherwise.

But so far, in the two hours since she’d arrived, she hadn’t seen one cute boy. She’d looked. Twice.

How many others had fallen for the brilliant marketing scam?

A panicked voice came from somewhere on shore. The tall grass and reeds blocked Kat’s view, so she ran off the dock.

“Where are you?” Kat yelled.

Kat tromped through the grass and saw two teens.

The girl was around the same age as she was. She had shoulder-length blonde hair and wore a flower-print sundress and white sandals.

The boy looked to be a couple of years older. He lay on the ground and clutched his leg. He was dressed in khaki pants and a navy polo shirt.

“My brother got caught on something and fell.” She spoke with a slight accent.

The girl stood a few feet away. Her face was pale, and she wrapped her arms across her stomach. “There’s…blood.”

She kneeled on the ground. “Let me see.”

The boy grimaced. “Who are you?”

His accent was stronger than his sister’s.

“It’s okay.” Kat placed her hand on his shoulder the same way she comforted an injured or sick farm animal. “I know first aid.”

The tension on his face remained, but his green eyes didn’t look nearly as dark. He raised his pant leg as much as the fishing line tangled around his calf allowed. Blood streaked the skin. A hook was caught above his ankle.

Not any hook, either. The one from the pole she’d borrowed and left on the ground when she went to the dock.

“I’m so sorry.” Her throat thickened. “You tripped on my fishing pole. But I’ll fix this.”

“No.” The lines around his mouth deepened. “Go get help.”

“I can do this.” Kat removed her pocketknife from the back pocket of her shorts.

He flinched. “What are you doing with a knife?”

“I live on a farm where carrying a knife comes in handy.”

This one had been a birthday gift from her parents when she turned eight, though she had a feeling her grandparents had purchased it. Her mom and dad were too busy with their research on primates to remember special dates and holidays. Sometimes, Kat wondered if they remembered they had a daughter. Too bad spending the summer with them hadn’t been an option.

She opened up the knife. “When you’re in the wilderness, you should always be prepared.”

“We’re at a summer camp with a ridiculous name.” He spoke through clenched teeth. “Not the Białowieża Forest.”

Kat had no idea what or where that place was, but the exotic name conjured up images of a grand adventure. Someday, she’d travel to places like her parents did and see the world.

“True, but I can use the knife to remove the fishing wire so you won’t stumble again.” Sunlight glinted off the silver blade. “If you stay still, I won’t cut you.”

His clear, green eyes turned cold and looked like frozen peas. He must be in pain.

“Go ahead,” he said finally.

Blood seeped through his pants. A large red spot covered his knee.

Ouch. He must have hit the ground when he fell.

She cut away the fishing line and then closed the blade. “I’m going to pull out the hook. This might sting.”

She was tempted to salute but thought better of the idea. He didn’t seem like he was in the mood to laugh or smile. She didn’t blame him.

Kat pulled on the hook.

Kat was. She tried again. Each time she worked to dislodge the hook, the boy’s face reddened and the girl’s paled. Finally, it came out. “Got it.”

He squeezed his eyes closed.

Kat placed the hook on the fishing line she’d cut off.

The boy opened his eyes. “Thank you.”

“You shouldn’t leave your things unattended.”

“I didn’t think anyone would be out here.” She gathered the fishing gear, stood, and extended her arm to help him stand. “We need to get back to camp and clean you up. You don’t want your wounds to get infected. And someone should check your knee.”

The boy hesitated and then slowly, as if he wasn’t sure he wanted to touch her, grabbed hold of her hand and stood.

His strong grip surprised her given he was so thin. In spite of his cold gaze, his skin was warm. He was taller than she expected, and she had to look up at him, which was nice. She towered over many of the boys in her class.

She couldn’t tell if his light brown hair was curly or messy. The wild style might look good on him if he smiled, but his lips pressed together so tightly she could barely see them.

He must be in pain.

Kat slipped her arm around his waist.

Brushing her hand away, he stared down his nose. “This was your fault, and I am capable of walking on my own.”

His I’m-better-than-you glare prickled. So not polite.

She’d tried to help after her mistake, but if he fell again, that would be on him this time. “Let’s go then.”

“Thank you for helping my brother.” Color had returned to the girl’s face. She fell in step with Kat. “I’m Sophie von Strausser.”

The boy made a face. “You’re named after an animal?”

“Kat with a K. It’s short for Katrina. But I wouldn’t mind being named after cats. I love animals.”

The boy rolled his eyes. A reaction she knew had nothing to do with his injury. As her grandmother would say, he had an attitude with a capital A.

“You’re American,” Sophie said in a pleasant singsong voice that belonged in a cartoon.

Kat smiled. “Well, this camp is in America.”

“Oh, yes. I forgot amid all the excitement.” Sophie grinned. “This is my brother Gee—”

“Gill.” His harsh glare traveled from Kat to his sister and sharpened along the way. “My name is Gill.”

The sooner Kat could leave Gill with those in charge at the camp’s office, the better, but Sophie seemed friendly. “Nice to meet you.”

“The pleasure is mine.” Sophie walked with a bounce to her step. Not quite skipping, more like a hop. “I’d be delighted to be your friend.”

Sophie was bright and cheery like a meadow of wildflowers, as pretty, too, but Kat wasn’t used to anyone wanting to be her friend. Well, except the animals at the farm.

“Sure. You can never have enough friends.”

“Who is your BFF?” Sophie asked.

“I, um, don’t have a best friend.” Kat left off that her closest friends had four legs and were covered with fur. Well, except the chickens and ducks. Only two feet and feathers for them.

Sophie hooked her arm with Kat’s. “Now you do.”

“I’m from Palouse.” Kat supposed BFFs should know something about each other besides their names. “It’s a small town in Eastern Washington. Where are you from?”

Kat could relate to his want-to-be-anywhere-but-here look given her mood less than ten minutes ago, but he didn’t have to act like a jerk. Gill reminded her of the popular kids at school who looked down on everybody else unless they wanted something, but she knew better than to say anything.

On second thought… “An entire continent is a bit general, don’t you think? Or are you nomads?”

Sophie giggled. “Nomads. I love it.”

The lines on Gill’s face deepened like canyons. “We live in a small place that’s virtually unheard of outside of Europe.”

His authoritative tone reminded Kat of the school’s new vice principal, who passed out detentions like Halloween candy. Best to stay far, far away from Gill. That should be easy to do.

“But I’m assuming an American might know the continent,” he added.

Gill not only thought he was better but also smarter than everyone else. The urge to brush him away like a swarm of gnats was strong.

“Don’t mind my brother,” Sophie said before Kat could respond. “He’s always moody and wanted to spend the summer at boarding school instead of camp.”

Boarding school? Kat had never met anyone who went away to attend school. She couldn’t imagine what that must be like.

“So Kat from Palouse, have you seen any of the cute boys from the brochure?” Sophie asked.

Kat hadn’t been the only one who’d fallen for the sales pitch. She glanced at Gill. He could qualify as cute if you liked the tall, silent, hates-everything type.

She focused on Sophie. “No, I haven’t, but I’m hoping not everyone is here yet.”

“Unbelievable,” Gill said. “The two of you are the same.”

Kat took that as a compliment. She straightened.

“Which is why we’ll get along splendidly.” Sophie stuck her tongue out at Gill before turning her attention to Kat. “My brother is going to be miserable the entire time he’s here, but I promise I won’t let him ruin our summer.”

A warm feeling flowed through Kat, as if liquid sunshine poured through her veins. She couldn’t help but smile.

Maybe Camp KooKoRomo wouldn’t be so bad after all.

Christmas at the Castle is available in the following formats: 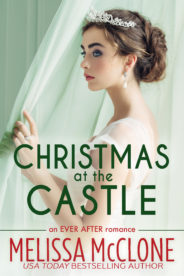 Did you know that Christmas at the Castle and many titles are available digitally from Tule's own bookstore? Check it out!