Hannah’s excited to be working for Frankie Kontarinis’s property company in the Greek island resort of Agia Kalamaros. And determined to impress her first client. Even if he’s millionaire music mogul, Sergei Alkaev, who’s well known as the Russian Rake, is a heartless playboy who changes girlfriends as often as his socks.

Tired of dating greedy, fickle women, Sergei’s not looking for another relationship—until Hannah has him thinking again. But her opinion of him is that he’s heartless, so how can he change her mind and persuade her to be his lover? When Hannah lets slip she’s inexperienced, Sergei makes her a proposition: let him teach her about love-making until she’s ready to find a man who will give her the happy-ever-after she deserves…

“I’m catching the morning flight to Paris tomorrow,” Olympia announced while they shared breakfast on the balcony of his Athens apartment with its stunning views of the Acropolis.

“Oh?” he replied, surveying her over his tablet and drinking in the stunning bone structure that had made her the darling of Europe’s catwalks. “Landed another job?”

“Yes. With—” She gave the name of an internationally renowned fashion house. “They’ve offered me a two-year contract. I will be doing some runway and—” Her deep brown eyes burned with a hardness he’d never seen before. “I will be the face of their new makeup line.”

He put down his screen, a feeling of uncertainty curling around him as he forced a smile. “Congratulations, dorogoy. That is amazing news. So, you will be commuting between Athens and Paris?”

“No,” she returned coolly. “I am leaving Greece. Paris and New York will now be where I am based.”

“Then I will be making frequent trips to Paris and New York to see you.”

“I’d rather you didn’t.” She wiped her fingers on her napkin with quick movements. “I want to concentrate on my career.”

Something akin to a sucker punch smashed at his chest. “Are you telling me that we are finished?”

“Yes.” Pushing herself up, she made to leave the table.

“You decided you are leaving and we are finished, and that’s it? I do not have a say about it?”

She half-turned, her eyes wide. “Yes! I don’t know why you’re making a fuss. I didn’t think you’d care what I did.”

“Well, that’s a first, and news to me. The Russian Rake has feelings.”

Her sarcasm stung, but he bit back a retort. Instead, he rose from his seat to step forward and reach out to her. But when she glared at him, he stopped and quickly withdrew his hand. “This is not what I want,” he murmured.

“You can’t have everything your way all the time, Sergei.”

“What do you mean by that?”

She shrugged. “If you don’t know, then I can’t be bothered to explain. I’m going tomorrow whether you want it or not.” She turned fully away, throwing a flippant, “We’re done,” over her shoulder as she swept inside the apartment.

Sergei thought about following her, but he knew there was no point. He’d seen the determination in her gaze. Heard the finality in her voice. He’d been dumped. That really was a first.

He turned and walked a few steps to place his palms on the rail of the balcony, staring out at the picturesque Plaka district, next to the Acropolis. Olympia had called him the Russian Rake, the name the tabloids had bestowed on him. They loved to spin fairytales about his apparently endless string of women, but they were only half right. He’d had some of the continent’s most gorgeous women grace his arm and his bed, although not nearly as many as the gossip mill made out.

But Olympia had also said some other things that struck a nerve deep inside. He pushed back from the rail, running his fingers through his thick, dark hair. His reputation as a notorious playboy was warranted. By his twenty-fifth birthday, he’d made a few million Euros through writing and producing a series of musical dance hits. Awash with money, power, and fame, he’d pursued beautiful women, but was quick to end things if they got too attached. Which they inevitably had, despite being initially chosen for their willingness to play hard to get. Some had reacted badly to the breakups, running straight to the press to sell their stories.

Would Olympia do the same? If she decided to kiss and tell, the headlines would be different this time—not the usual revenge scoop, but the revelations of the supermodel who’d sent the Russian Rake packing. That might make a dent in his reputation, although he couldn’t care less. What worried him more was the dawning realization about why she’d chosen to leave. Until today, she’d always appeared casual about their relationship, playful rather than passionate. But now he understood she’d felt much more strongly than she’d let on. He sensed he’d hurt her, truly hurt her, even though he knew probably better than anybody how wanting someone’s love while being treated with indifference felt.

It was at that moment he decided something had to change.

“Bring them back to the office when you’re done looking!”

Frankie tossed the keys Sergei’s way. Moving from where he’d been leaning against a terrace wall, he reached out and caught them.

“You trust me not to run after I remove the fixtures and fittings? I have a screwdriver right here.” Grinning, he patted the pocket of his stylishly cut jacket.

Frankie waved an unconcerned hand. “You don’t have the patience. Anyway, the Villa Lemoni will soon be yours, which means you’ll be stealing from yourself.” She returned his grin. “Well, gotta love and leave you. I have my next client booked in for midday. Look around again at your leisure. The alarm system isn’t wired yet, so you only have to make sure to turn both locks on the front door when you go.”

“Frankie… Frankie, slow down! You cannot do it all.”

“Perhaps I won’t have to soon. I’m doing well enough to hire an assistant. In fact, there’s someone I used to work with back in England who’d be ideal, if she’s willing to move to Kathos. Her name is Hannah Oliver. I’ve invited her to the wedding next month.”

“Fantastika!” Sergei nodded at his soon-to-be sister-in-law, the current owner of Ionian Villas. “I will look out for Hannah, introduce myself, and show her how nice we are on this island.”

“Hey, she’s a decent girl. Don’t frighten her off before I’ve had a chance to put the job proposition to her.”

“Only joking. I promise I will be on my best behavior.” He held up the villa’s keys, rattling them. “Thank you for letting me have these. I appreciate the chance to check things over.”

“You’re welcome. You know, I’m really glad you are the one purchasing the villa.” She gazed up at the pale lemon-yellow house. “I feel quite possessive of it since it was my first renovation for sale.”

“And it is very nicely done, too. I think I will be incredibly happy here.”

When Frankie left, he’d took in his surroundings. The view from up here was lovely, soothing. A paved patio lay below the terrace, bordering a small swimming pool. Beyond, there was a peaceful, expansive garden where paths weaved between pebbled beds filled with shrubs, grasses, and fragrant bushes of lavender, rosemary, and thyme. In the distance, the Ionian Sea—calm, misty, and blue—stretched to the horizon where Italy lay beyond.

He breathed in the mild winter air. Soon, it would be a new year and a fresh start. He was moving here for a quieter, simpler existence. Although he’d miss Athens in some ways, he was mostly over his life there—and definitely over being the Russian Rake.

Sighing inwardly, he started heading toward the villa. He might have bantered with Frankie about this new English girl she was hoping to hire, but he was tired inside when it came to relationships. These last few months, he’d been feeling guilty about how he’d treated the women he’d dated. True, he had a deep-rooted need for affairs he could conduct at arm’s length. During his early years in a Moscow slum, he’d been well conditioned to shy away from getting close to anyone. In addition to that, he’d only been behaving the way most other men in the music business did toward women—badly. But neither was a decent defense, and the trail of broken hearts he’d left behind him had begun to weigh on his conscience. Heavily.

As he reached the glass that made up one wall of the villa’s spacious living area, he stopped and took one more look at the panorama beyond the terrace. His parting with Olympia a few months before sprang to mind, and not for the first time. He could still taste the abandonment that enveloped him when she turned her back on him…that same bad feeling he thought he’d left behind in Russia when he’d escaped all those years ago. With effort, he shut his memories of Moscow down, storing them away in the recesses of his mind. There was no place for them, no need. Had he loved Olympia? No. He’d liked her a lot, had been content with their arrangement, but that was all. It would have ended eventually. Nevertheless, their breakup haunted him still.

He stepped into the living area, his footsteps echoing in its emptiness, the bitter scene with Olympia looping around his brain. She’d made him realize the time had come to review how he lived his life. The Villa Lemoni, on a quiet Greek island hillside, was the perfect place for him to retreat. No more Russian Rake. He was going to avoid any involvement with women for the next few months. Instead, he’d focus on getting his head together. Withdrawing from the hustle of the dance scene and concentrating on composing had been the best decision. He’d been commissioned to write the music for Greece’s entry into the annual Euro Songfest, and he was determined to come up with the winning melody.

He couldn’t hold back a wry smile. What would the media say if they discovered the Russian Rake was about to become the Russian Recluse? If he did what he intended and kept his head down, they’d probably never find out. At least not until he’d come out the other side, hopefully a better man.

The Russian’s Pleasure Proposition is available in the following formats: 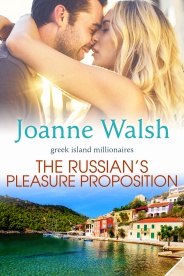 Did you know that The Russian’s Pleasure Proposition and many titles are available digitally from Tule's own bookstore? Check it out!