One taste of her lips, and friendship is off the menu

Kate has always been everybody’s friend and the de-facto little sister to the Wyatt brothers. But her feelings for Todd Wyatt, the town’s hottest firefighter, never skirted the sibling zone. Not that he’s ever noticed.

After years of nursing her crush, Kate decides to take action, hoping to hide her one awkward secret—she’s a virgin. Can she seduce Todd and keep her inexperience a secret?

In Todd’s mind, Kate’s always been the sweet girl he teases and hits up for free cupcakes. Until one surprise kiss over the summer jumps her from the platonic side of his brain to the want-her-in-my-bed side. The last thing he wants is to lose her friendship, but his resistance to her determined seduction is slipping. Fast.

When her bakery is vandalized and the attacks escalate, it becomes clear that for all Kate’s friends, she’s made at least one serious enemy. Can Todd and Kate solve the mystery before things turn deadly?

Kate wrapped her peacoat tighter around her curves, slipped from her car, and rushed toward the front door of her shop.

The cold wind whipped blonde strands of her hair about her face, and she shoved them aside as she fumbled to unlock the shop door. When the key finally twisted she stepped inside and shut the door, a shiver running through her.

“It’s definitely winter,” she muttered, flipping on the lights.

With a sigh, she glanced around the shop, taking in the decorations taped to the walls and the small snowflake lights surrounding the bakery display case. Christmas had been over for a few days, but since most of her decorations were more seasonal than holiday, they could stay up for a bit longer.

The smell of sugar, yeast, and cinnamon was a familiar scent that never failed to bring a smile to her face. Baking was in her blood—if someone cut her open she’d ooze lemon buttercream frosting.

She glanced at the clock on the wall and bit back a yawn.

The hours, however, were the part of a baker’s life she wasn’t all that crazy about. Some nights she stayed up way too late preparing for the morning baked goods.

When she’d opened the shop just over a year ago, she’d been a little worried about whether Kate’s Cakes would sink or swim. Especially since she made everything from scratch, the cost of her food was a little more on the pricey side. But during the tourist season business boomed, and fortunately, the locals seemed to love her too. In fact, it seemed the fresh, high-quality ingredients became her selling point.

With a sigh, she went to start the first batch of cupcakes. A couple of hours later she’d loaded up the display case with a few dozen batches of cupcakes and pastries, when a sharp knock landed on the door.

Her heart leapt in her chest as she tried to see out into the fading darkness. The sun was not quite up and the shop didn’t officially open for another hour and a half.

Wiping her hands on her apron, she stepped out from behind the counter and walked toward the door. As she recognized the man outside, the tension eased from her body. Unfortunately, tingling heat and sharp awareness replaced it as she let Todd Wyatt inside her shop.

“Well, aren’t you up early?” She hoped her voice didn’t sound as high pitched to him as it did to her.

Todd grinned, his broad shoulders and tall frame filling the entryway before he closed the door behind him.

Her breath caught and she tried not to think about how handsome he was. He’d always seemed impossibly sexy to her, though. And maybe part of her attraction to the youngest Wyatt brother came from the fact that he’d always been so damn nice to her.

“Just coming off a twenty-four-hour shift. Was heading home when I saw your lights on.”

“Stalker,” she teased and started to fidget, before curling her fingers into fists at her sides.

Her heart had yet to slow down, but then, she’d kind of gotten used to it racing when Todd came near.

She cleared her throat. “I’m not even open for business yet. So, what, are you here to mooch some free cupcakes again? Beg me to take pity on my local fireman?”

“You know it.” Todd grinned before his light expression suddenly darkened and he stepped past her and moved around her shop. “And I also wanted to make sure things have been running smoothly around these parts. No more trouble.”

Ah, yes. Trouble. Her brows drew together and she worried her bottom lip between her teeth, letting her gaze dart to the window that had been broken a few months ago.

“No. No more trouble. I’m guessing that the brick-thrown-through-the-window thing was just a teenage prank.”

“Hmm. Only they never caught the guy, which is unusual in a town this size.”

She sighed. “Look, I’m not worried. Besides, I’ve got Walt next door, who’s pretty much transformed himself into my own personal guard dog.”

Todd scowled and then thrust his hands into his pockets. “I don’t like that guy.”

Seriously? Kate’s mouth parted slightly as she tried to figure out how to respond. What wasn’t to like about Walt? The poor young widower was quiet and charming and protective of both her and her shop. But Todd’s drawn brows over an irritated gaze clearly indicated he didn’t share her appreciation for the hardware shop owner.

“He just rubs me the wrong way.”

“Right. Well, okay then.” She cleared her throat. “Now, about that cupcake… I can spare one for you, I guess. I always do.”

“You are such a doll.” Todd’s roguish grin reappeared, and her stomach did another somersault as he squeezed her shoulder.

She repeated the mantra in her head, keeping a smile on her face as she went to box him up a chocolate cupcake that he loved. Though she needn’t have bothered with a box, because he took the treat, sat down at a table and immediately began to devour it.

God, she was such a sucker. Good thing she didn’t give away free cupcakes to every hot guy in town or she’d be out of business. Not that there were all that many totally hot guys in Wyattsville… the first ones that came to mind were the Wyatt brothers. Todd was the youngest and the last bachelor standing. To the disappointment of the town’s female population, the other two brothers, Tyson and Trevor, had recently gotten married.

With a sigh, she went to frost cupcakes again, sneaking the occasional glance at Todd as he ate. Her mouth dried out as his tongue circled the top of the cupcake, licking up buttercream frosting like it was ambrosia.

His mouth was so full and sensual, and the way he worked his tongue… how many women had firsthand knowledge of just how talented Todd Wyatt was with his mouth and tongue? A damn good amount of them that was for sure. Heat slid low in her body and her hands weren’t as steady as she reached for another cupcake to frost.

She should’ve been repulsed by his womanizer reputation, and yet, it almost fascinated her. Her and the entire town. The female sex seemed to know and accept Todd Wyatt for what he was. A charming playboy.

But she knew better than to get involved with the one man in town who’d never settle down. Even if she’d been a little more than tempted lately. No matter how good in bed he was supposed to be, or how going to bed with Todd Wyatt seemed to be equivalent to riding a mega roller coaster at least once before a person died.

Her nose crinkled as she reached for the bowl of pistachio buttercream frosting so she could frost another dozen cupcakes.

Well there was no way she’d give her heart—not to mention her virginity—to a man who wouldn’t value either of them. Especially after what had happened during Ellie’s bachelorette—

“Have dinner with me tonight.”

Kate’s fingers clenched around the cupcake she’d been carefully decorating. The top of the cake exploded over the delicate paper wrapping, sending pale green frosting and glittery sugar crystals everywhere.

Her heart thundering in her chest, she set the massacred sweet treat aside and glanced up at Todd again. She had to have heard that wrong. Surely Todd Wyatt had not just asked her to dinner.

Struggling to keep her voice as casual as possible, she still squeaked, “Dinner?”

Todd stood up and crinkled the cupcake wrapper in his hand, before tossing it in the garbage. “Yeah, dinner. If I weren’t going home to crash for the next ten hours, I’d say lunch.”

Kate struggled to keep her mouth from flapping. Todd had never asked her to go out with him—not alone, at least. Sure, they’d hung out with friends and his family more often than not, especially with all the weddings lately… but alone? Why? What could possibly be his moti—

“I mean, dinner is the least I can do with you being my cupcake dealer and all.”

When he flashed his pearly whites again, her knees trembled a little. She slid her gaze over his face, trying to read his thoughts, but all she could focus on was the dark stubble on his chiseled jaw. She ran her tongue over her mouth and swallowed hard.

“Great. You want me to swing by your place about six?”

“I can meet you somewhere, no need—”

“Come on and embrace your inner tree hugger, Kate. Let’s save some carbons and carpool. Or we could even walk.”

“It’s freezing,” she replied automatically. And why was Todd suddenly spouting off like a local environmentalist? “Fine, just pick me up.”

“Great. I’m going to head out and hit the sack.” He winked and turned toward the door. “See you tonight, doll.”

“Okay.” She gave a light laugh. Did it sound as skeptical as it felt? “I’ll… see you tonight.”

She waited until he’d left the shop to let her laugh turn a bit maniacal. She’d just agreed to have dinner with Todd. It didn’t mean anything. How could it? She certainly wasn’t his type. And they’d been friends for way too long. But still, dinner with Todd? Just the two of them?

Her stomach flipped and she let out a small groan. How the hell was she going to keep her feet on the ground for the next ten hours? She shook her head and walked to the back of the shop to start preparing more pastries.

Flash Point is currently available in digital format only: 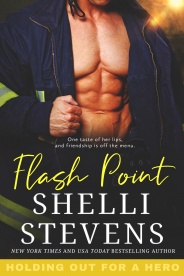 Did you know that Flash Point and many titles are available digitally from Tule's own bookstore? Check it out!