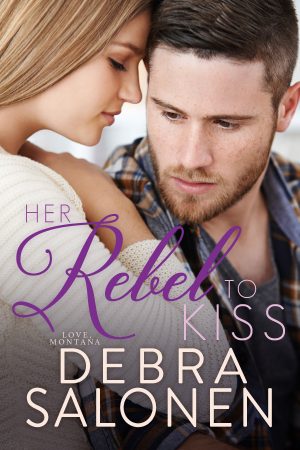 Her Rebel to Kiss

Don’t look down and don’t give up.

Justin Oberman‘s credo for living his adventurous–some might say death-defying–life to the max served him well until the unfortunate outcome of a climb made him walk away from the sport he loved. A lucrative new job offer could pave the way to a more traditional life in Marietta, Montana, where his two best friends have fallen in love with the women of their dreams. But settling down always seemed more daunting than Everest and not worth considering until a mysterious lady in red walks into his life on New Year’s Eve. Suddenly, that happily-ever-after stuff Flynn and Tucker have been raving about looks within reach.

The first fall is always the hardest.

Nikki Magnesson Richards has loved Justin Oberman most of her life. First, from the safety of her brothers’ old tree house. Later, with unrequited teen-age angst. Her poorly thought out attempt to get him to notice her cost them both dearly. Now, a dozen years later, her fairy godfather boss has orchestrated the most romantic meeting possible–the Big Sky Mavericks Masked Ball for Charity. A kiss at midnight with her very own Prince Charming isn’t too much to ask, is it? But what are two star-crossed lovers supposed to do when one kiss isn’t enough?

Nicole Richards pressed her forehead to the porthole-sized round window, straining to catch the hint of sunrise beginning to lighten the edges of clouds miles below the small but luxurious jet. They’d left Paris later than they’d wanted. Meetings that ran long. Traffic every bit as dense and congested as L.A.’s. She was bone tired but sleep eluded her.

“Your mind won’t turn off, huh?” her travel mate and boss asked from the fully reclined seat across from hers. “Mine, either.”

She turned her head to look at J. Angus Hooper, a man some called genius, some “a crackpot economist who got lucky.” Nikki knew he was a little of both. At eighty-one, Angus resembled a hobbit more than a captain of industry, and yet his diverse holdings circled the earth, his wealth routinely placing his name on the Forbes’s wealthiest Americans list. He was also one of the kindest, shrewdest, and most unpredictable men she’d ever met. He often admitted he lived to keep her on her toes.

A reference, she believed, to their initial meeting a dozen years earlier. When half the doctors on staff at the rehab hospital where they each were residing—for different reasons—told Nikki she’d never walk again, J. Angus said, “Baloney.” With a contagious air of optimism and zeal, Angus almost single-handedly bullied her into getting out of her wheelchair and pushing through the pain to the point where she could walk without help.

She liked to say their friendship was forged in mutual anguish. J. Angus had been recovering from his second stroke at the time, and shouting orders at Nikki had, remarkably, given him back his power of speech.

“I’ve been lying here thinking about missed opportunities and all the what-ifs that go with that sort of thing. Do you ever wonder where you’d be if you’d kissed that one person who got away but took a piece of your heart with her?” His chin turned. “Or him, in your case.”

A name sprang to mind. A face. Her first crush. “Not as often as I did I in my late teens,” she admitted truthfully. “I like to think I’ve grown up a bit since then.”

“Pah. Maturity only counts in horseshoes.”

Her lips curved despite the energy the effort took. His unique type of mondegreens usually hid a much deeper meaning, but she was too tired to probe. Instead, she gave him what he wanted. A name. The boy she’d secretly pined for her entire teenage years, until she acted on her desire and ruined both their lives.

“Clichés are shared human experiences that everyone can relate to. What happened?”

“He was two years older than me and barely knew I existed…until my freshman year of college. I crashed his climbing party and fell off the side of a cliff.”

She stared at the ceiling, remembering the image imprinted on her mind. “Justin Oh. That’s what all the girls called him. A true rebel with a style all his own. Not goth or grunge. He made Patagonia cool.”

“He’s the boy who carried you to the helicopter after you fell.”

A statement of fact. An act of heroic selflessness that made him Superman in her eyes. Sadly, his act of kindness cost him so much she could barely bring herself to think about that shameful period of her life.

Instead, she closed her eyes and remembered how safe she’d felt in his arms. The reality of the moments after she fell—the blood, the pain, the panic in the eyes of her friends—had become dim and slightly out of focus over the years. Instead, she remembered with crisp intensity the look of compassion in Justin’s beautiful, gray-green eyes.

His chest had been heaving from the exertion of carrying her across a minefield of shale and bowling ball-size boulders. Rivulets of sweat had trickled down the side of his face. She’d wanted to reach up and brush away the drops but the line of communication between her brain and her extremities hadn’t been working. Her first inkling of what was to come.

“You’re going to be okay.” He’d told her. “Don’t you let anyone tell you otherwise.”

She couldn’t remember falling, but she’d fallen completely, utterly in love during Justin’s—some said misguided and dangerous—rescue attempt. Unfortunately, everything went downhill from there and she never saw him again.

She wondered if she ever would.

Probably not, she thought.

But when she closed her eyes, she pictured Justin’s strong arms wrapping her in the sort of hug that shut out all the trials and turmoil of the world. A girl could dream. And the man of her dreams was a fantasy, nothing more because the real Justin Oberman had every reason in the world to hate her.

Her Rebel to Kiss is available in the following formats: 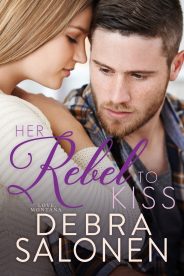 Did you know that Her Rebel to Kiss and many titles are available digitally from Tule's own bookstore? Check it out!