Everyone has baggage by the time they’re into their thirties.

When single mom and Marietta High School teacher Gemma Clayton acquires a strong, family-oriented and very good-looking new neighbor over her back fence, she’s not put off by his complicated past as the attraction flares between them. Her own past is a very different matter, however.

Nobody knows what she went through on the night of the 1996 Marietta High School senior prom, between running after Judd and Garth Newell’s car as it left River Bend Park and limping into her friend Neve Shepherd’s street two hours later.

But Gemma’s secrets have been rusted up inside her for so long that not even a gorgeous man like Dylan Saddler can help her to break them free.

Gemma was painting the bedrooms this summer.

The house had been shabby when she’d bought it, and that had been a plus, as far as she was concerned. The dated wallpaper, peeling exterior paint and burnt orange or grass green shag pile carpets had knocked thousands off the price, which meant a smaller mortgage and therefore a chance to make herself secure for the future a little more quickly.

She’d taken advantage of a high-school teacher’s summers off, and had given herself a big project each year. First, those awful carpets, which she’d pulled up to expose the undamaged hardwood floors beneath. It had been a challenging task to clear the rooms, sand down the wood and apply three coats of hard-wearing varnish. She and Bree had actually camped in the backyard for over a week, three summers ago, while the varnish was drying.

Two summers ago, she’d prepped and painted the house exterior, choosing a misty grey with charcoal trim. With the old, flaking paint to get rid of, the job had been a mammoth one, and she never wanted to see an electric belt sander or a can of paint stripper again as long as she lived.

Last summer she’d done the interior downstairs, choosing creams and pale yellows. This summer, finally, she could get rid of the black and silver flocked wallpaper in the spare room, and the pink, orange and green candy stripes in her own bedroom. She didn’t have to do Bree’s room, because Bree had rebelled against the original pink and blue ballerina wallpaper within a week of moving in, and had stripped and painted it herself, in three different shades of smoky purple.

On this sunny Friday morning, bright and early, the day after Dylan Saddler had returned from his trip away and collected his house keys, Gemma was standing on a step-ladder in the spare-room with a roller, wondering if the delicate, dusty coral color she’d chosen for the room was going to be too dark, when Bree strolled in.

“It’ll dry lighter. You always forget that and think colors are going to be too dark.”

Bree went over to the open window, and murmured covertly a moment later, “Who is that woman in Dylan’s backyard?”

Bree’s voice dropped even lower. “I don’t know what woman, that’s why I’m asking. But she’s sitting on a deck lounger with half her left leg in a cast. Oh, wait, and her left arm, too. Wow! And bruises on her face, and grazes on her neck and shoulder. I can see them from here.”

“She’s been in some bust-up, from the look of her.”

Gemma had no idea who she could be. “Another aunt?” she suggested, thinking of frail, elderly women falling down stairs.

“Ooh, no, this girl is not aunt material.”

“Girl? I thought you said woman.”

“Okay, yes, woman, but young. Definitely not an aunt.” Bree kept looking, while Gemma’s roller went absent-mindedly up and down. “I’d say she’s thirty, max, and probably closer to twenty-five.” Bree’s curiosity was like everything else about her, from her skin to her politics – fresh, vibrant and youthful.

“Amber, I think.”  I know perfectly well his ex is Amber, but I don’t want Bree to guess that I have Dylan’s ex-wife’s name on the tip of my tongue.

“How old would Amber be?”

“I don’t know. Presumably mid-thirties. Dylan is forty, and they have a nine-year-old.”

“Can’t be Amber, then. This woman’s too young. But she’s petite and ver-r-ry pretty,” Bree reported. “She has her hair in a knot at the back and she’s wearing sweats. Clingy ones, black with coral trim. Leggings, I guess. Well, legging, singular. The left leg she’s had to cut off just above the knee because of the cast. And a sleeveless coral jogging top edged with black. She obviously doesn’t wear sleeveless tops often, though, because her tan line ends half way down her upper arm.”

“Thank you for the detail on her wardrobe and tanning habits,” Gemma drawled, to hide the fact that, sight unseen, she was getting just as curious about this woman as her daughter.

“Come look for yourself.”

Bree dropped her voice. “Come look, because I’m seriously wondering about her. She won’t see us. She has her eyes closed. I think she’s asleep.”

“Why are you wondering about her?” Gemma climbed down from her step-ladder, and sat her roller carefully in the coral-filled tray. Once again, she worried that the color was too bright. Turned out coral was for clingy athletic wear, not spare-room walls.

Bree shrugged. “Just wondering.” She sounded a little wistful. “If she’s a girlfriend and they’re moving in together, or something.” She darted a look at Gemma, who felt her face heating up.

What did you do when your daughter kept trying to match-make for you?

Bree had been, probably, eleven years old when she’d first started it. “Don’t you think our gym coach is nice, Mom? Lucy’s mom says he’s divorced…” Gemma had pretended not to notice, thinking it would stop, but it hadn’t and she’d found herself stuck in the strategy of pretense. The older Bree grew, the more she wasn’t fooled, and it was a stubborn, unacknowledged game between them now.

Bree threw men in Gemma’s path, Gemma tripped over them and pretended she had a stone in her shoe. Bree laughed about it, Gemma pretended not to hear. This spring and summer, however, Bree hadn’t said a word, not one word, about Dylan Saddler’s niceness or his relationship status, and that was spooky rather than reassuring. Since when had Bree ever let a possible candidate for “Mom’s boyfriend” get away without comment?

Gemma arrived at the window, where Bree was still leaning on the deep wooden sill and looking down through the insect screen into their back fence neighbor’s garden. “Look at her,” she said – again quietly, so that her voice didn’t carry too far.

They were probably safe about that. The neighbor down the street who played country music at all hours was listening to What Hurts The Most by Rascal Flatts, and it was loud enough to mask the sound of their conversation.

The woman in the leg and arm casts did have her eyes closed, and in any case with the bright light out there, she probably wouldn’t be able to see in through this shaded window, which meant Gemma could also safely look as Bree had commanded.

Or safely spy, if you wanted to be completely blunt about it.

Which Gemma did want, because she refused to lie to herself. She was spying, at her daughter’s encouragement, and for all the wrong reasons.

Despite the fresh injuries, Bree was right, this was a very pretty girl.

She was slim in an athletic way, with dark hair knotted into a perky bun. She had high cheekbones, a wide mouth, perfectly shaped collar-bones, and a butt that couldn’t possibly look big in anything.

It was a rhetorical question, but Gemma answered it anyhow. “She’s a complete stranger who was in a car-crash on a lonely mountain road and Dylan was the first on the scene, and she has amnesia and no i.d., just this mysterious cache of Russian-made weapons in the trunk of her car and some enigmatic entries in a coded diary, so he’s had to take her in until her memory comes back and they can work out why she was on the run.”

“Okay, she slipped through a tear in the fabric of time, sustaining horrible injuries as a result, and she’s actually from the fourteenth century, and he’s dressed her in modern clothes until he can work out how to get her back to her own time.”

“Also from a book. Any real life suggestions?”

“Nope. That’s why I’m giving you the ones from books.” That paint roller was going to start drying out soon, if she didn’t get back to it and start painting again.

Bree dropped her voice even more, and spoke in a very different tone. “But don’t you mind, Mom?”

“C’mon, let’s not do this. You know what I’m talking about. I was twelve when I realized you always knew what I was talking about. Dylan seems so great. And… and… like, hot, if I was forty.”

She made forty sound like the dark side of the moon.

And why shouldn’t she, Gemma thought. In a lacy, midriff-baring top and a tiny skirt, with her silky seventeen-year-old ash-brown hair and her seventeen-year-old figure and soft lips and big eyes, a man of forty – even a hot forty – must seem impossibly over the hill.

Long Walk Home is currently available in digital format only: 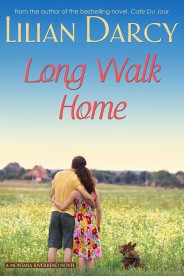 Did you know that Long Walk Home and many titles are available digitally from Tule's own bookstore? Check it out!