What Happens in the Ruins

Can she stop her past from ruining her future?

Sorcha Mackinnon isn’t your typical tortured artist. She is also a party girl, a vintage shopper, and the heiress to a whisky fortune. But when inspiration suddenly flies out the window, she’s left with an empty whisky glass and a blank canvas…until a childhood friend waltzes back into her life.

She’s known Danny Gordon since birth, but they lost touch as their careers took them in different directions. He offers to show her the parts of Scotland he swears will spark life back into her brushes. And as they tour the sights on the back of his motorcycle, Sorcha realizes that under the tattoos and smart mouth, Danny may inspire more in her than just a new painting.

But as a good time begins to morph into an ever after, Sorcha is reminded of old wounds that just won’t heal. Danny tries to open her heart, but her self-imposed isolation makes things harder than ever. Now she must decide what to do, because what happens in the ruins doesn’t always stay there.

I stared at the blank canvas, my paintbrush tapping against the easel. The same canvas had been empty for almost two weeks straight and I just couldn’t bring myself to do anything with it. It just sat in the corner of my room, mocking me. I was so close to tossing it out the bleeding window.

A row of paintings I had done during the winter were lined up against the far wall, but those didn’t seem much better than the half-finished ones stacked out of sight in the closet. They were one landscape after the other, the same hues of grey and green that dominated the Scottish countryside in the colder months. They were bland and boring, nothing like the vibrant works from my last show, Flowers by Sorcha Mackinnon. It was a pity. I’d have to scrap them all.

There was a knock on my door and my cousin’s girlfriend Rose poked her head in without waiting for a response. “Hey, Sorcha, you busy?”

“Painter’s block?” she asked, coming in and sitting on the edge of my bed.

“Yes, but I can’t look at it any more. I was hoping I’d find a bit of inspiration working in the castle, but it’s just not happening.”

“If you want, you can come up to the attics with me and look through the rest of the boxes for more paperwork. I found a great, hand drawn map yesterday that I think is original.”

“Rose, digging about with you in the attic for some scrap paper from the eighteenth century sounds like a right party, but I’m going to have to decline your invitation.”

“There could be something in there that might spark your creativity.”

“Or just dust that would send my allergies into a state.”

I put down the dry brush and began twisting the tops onto the paint tins. I just couldn’t force it. “I think I’ll take a break today in any case. The more I look at it, the more I want to toss the lot and go get a business degree like my mum wanted.”

“You’re right, but I can’t sit here anymore. Do you have to go to the attics now?”

“Yeah. If there’s anything else up there I want to show at the castle opening, I need to find it now before I order the display cases.”

“Well, have fun with that. I’m going to take a wee drive to Nairn, settle my head a bit.”

“Okay. Are you going to have lunch first?”

When she left, I carefully packed up my unused art supplies. It had been exactly six months and ten days since my last art show and four months and six days since I’d painted something I didn’t completely despise. I was afraid if I didn’t break out of the slump, I’d lose my talent forever. Of course a trust fund ensured I wouldn’t ever be a starving artist, but I didn’t want to be a failure in something I loved so deeply.

Once I finished clearing up, I took off my painting smock and went to the standing racks of clothes I had spread around the room. I put on a pair of black leggings with a large, grey T-shirt hung off one shoulder and well past my hips. Then I pulled on my black trainers and grabbed my keys and purse off the nightstand before going downstairs.

As I walked, I ran my hand over the stone walls, much as I did in my childhood home. While I wasn’t raised in a castle like my cousin Lachlan was, my father had bought a fine little estate near Inverness when I was young. It ensured I felt more at home in the countryside than in the city, although I always did have great fun in Edinburgh when I visited.

I rounded the line of Calder Castle Range Rovers to my silver Mercedes around the side wall, unlocking it with my key fob. The grounds around the castle were still a bit misty, but the sky was relatively cloudless, giving me hope I could at least have a nice day in town without being completely rained out. It took several instances of being half drowned before I got in the habit of keeping an umbrella in the boot of my car like my mum always told me to.

As I left the castle grounds, I synched my phone to the car and turned the volume up. The band Bridal Veil Falls blared and I settled into the short, familiar drive to Nairn. I hadn’t had the chance to go there often in the past few years, but I always had a soft spot for the seaside town. When it wasn’t crawling with tourists that was.

Despite it being August, well into tourist season, the town was still on the quiet side that morning and I found a good parking space near my favorite coffee shop, deciding to make that my first stop. It wasn’t one many might notice, being tucked among the little residential homes along the coast. But what looked like a wee cottage to the untrained eye, had secret charms not visible from the road.

I went to the counter and ordered a large American-style latte with plenty of sugar like Rose often got. It was piping hot, ridiculously sweet, and the caffeine coursed through my veins as I walked towards the back of the shop.

The wall was not really a wall, but a giant window overlooking the shore, the glass curving upward and showing off a snippet of the sky. It looked like a greenhouse, with plants tucked about the panes and a pair of resident cats winding around the terra-cotta pots that held ferns and leafy floral pieces I couldn’t identify. I chose a large, red leather armchair right against the glass and sat down, setting my hot coffee on the table beside me.

One chubby, black cat peered at me from between two containers, its eyes the same vivid green of the plants. I reached out a hand and scratched the cat under its chin, taking a look at the collar. It read My Name is Nessie. I flipped it over and read the back. Do Not Give Me Treats. I Am Too Fat.

Something about the scene needed to be captured. I took my sketchbook from my purse dug around for a pen. Usually there were at least three floating around, but for some reason, my search was coming up empty. I sifted through the makeup and spare coins and fought the urge to throw my bag. All I wanted was a change of scenery to spark some artistic flame, but I drove all the way there for nothing.

At least the coffee was good.

“Need one of these?” a voice asked.

I looked up and saw a pen, then I followed the leather-clad arm up to a scruffy jawline with a mouth set up in a smile, a pair of black Ray-Bans, and a shock of dark hair. “Danny? Danny Gordon?”

What Happens in the Ruins is available in the following formats: 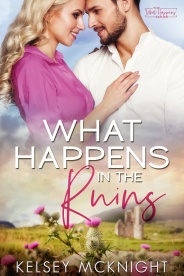 Did you know that What Happens in the Ruins and many titles are available digitally from Tule's own bookstore? Check it out!