Holiday at the Graff, Book 2

Holiday at the Graff, Book 2

Christmas to the Rescue

Jemma Banks is finally ready to celebrate and enjoy the Christmas season in a way she never did as a child. But when her father breaks his pelvis, she returns home to Marietta to care for him. He is desperate to make amends with Jemma, but she is determined to leave Marietta with her heart intact, even if it means being compared to Scrooge.

Physical therapist and snowboarder EJ Corpa can’t ignore the pull when he lays eyes on his patient’s daughter for the first time. Jemma is beautiful, but guarded. Deep down, EJ knows she’s a woman who’s longing for a little fun. When she agrees to help with his clinic’s tree for the Mistletoe and Montana auction, the armor she’s so carefully constructed begins to fall away, and the magic of the holiday season takes hold.

With ice skating, hot cocoa, and Christmas tree decorating for a great cause, EJ and Jemma begin falling for each other. Will EJ begin to see that life’s adventures are more thrilling when there’s someone to share them with?

Previously titled Christmas at the Graff

Jemma Banks hated Christmas. Well, that wasn’t quite true. She hated what Christmas symbolized—happiness. Joy. Forgiving and forgetting for the sake of peace and goodwill, and all that jazz.

She opened the door of her very sensible Honda Accord, and stepped out onto the icy parking lot of Marietta’s one and only hospital. She’d never actually been to Marietta before, even though her dad had called it home for the last eleven years. But she was a Montana girl, through and through. She was used to gorgeous, snowcapped mountains and charming little towns that looked like Hollywood movie sets.

As she eyed the big concrete building with a Christmas tree twinkling in the lobby window, she reminded herself that she wasn’t going to let that charm affect her in the least. She was here for one thing and one thing only. To help her dad after a particularly bad fall, which had resulted in a broken pelvis. She was the only one able to care for him. Her sister wouldn’t have anything to do with him—broken bones or not—and Jemma couldn’t really blame her, could she?

Pulling the collar of her beige raincoat up around her neck, she took a deep breath and surveyed her surroundings. The little town stretched out adorably behind her. White lights were strung along the rooftops of the historic, red brick buildings. Huge, frost-covered pines punctuated the horizon, and beyond that, Copper Mountain rose like a giant castle in the distance.

Straightening her shoulders, she turned back to the hospital. Her dad was right—it was a magical place. And just like anything magical, it had the ability to disappear before her very eyes and leave her heart shattered in a thousand tiny pieces.

She couldn’t wait to get out of here.

EJ Corpa looked down at the older man. He was clean shaven this morning and wore a red flannel shirt EJ had gotten him last Christmas. There were two bright spots of color on his cheeks, which just yesterday had begun to look sunken and pale. He looked happy. But most of all, he looked excited.

Joe Banks turned and grinned while leaning heavily on the walker. “She’s on her way. Should be here any minute.”

“That’s what you said.” EJ smiled and put his hands in his pockets. Inside, however, he was more than skeptical of this arrangement. Joe’s daughters had basically written him off years ago. It had taken a significant guilt trip over the phone by the discharge nurse to convince his youngest that Joe was refusing to go to a skilled nursing facility, and he’d need some help at home to recover. To Joe, this was a perfect opportunity to reconcile with his daughter. And he was pretty damn tenacious when he set his mind on something.

As Joe’s physical therapist, EJ knew he should be happy for the guy. He’d get to go home and learn how to walk again under the guidance of a family member. But as his friend, he was protective, and he didn’t want the man who’d grown into a father figure hurt or disappointed when it didn’t work out. Which he’d bet a brand-new snowboard it wouldn’t.

EJ rubbed the back of his neck and looked out the window toward the mountains. There was powder in the forecast. And powder always made EJ happy when other things didn’t.

“I know you’re looking forward to shredding the gnar,” Joe said. “When’s your next day off?”

EJ had to resist the urge to laugh. Joe was constantly trying to bridge their age gap with ridiculous tween lingo. “You can just say snowboarding, Joe. I’m not seventeen.”

“Might as well be, with all that crazy stuff you do.”

Joe laughed, and it was a warm, rich baritone that EJ had missed. Getting old was shit. So were broken bones and family riffs that time and distance only made deeper and more significant.

“Mr. Banks? Your daughter is here.”

They turned at the nurse’s voice behind them.

EJ didn’t know what he’d expected. Maybe a wicked witch of the west with a bony bod to match. Somebody who looked like she could callously ignore her dad’s pleas for forgiveness, even in old age.

But she wasn’t anything like that. In fact, she looked exactly the opposite. Pretty, round face. Soft, curly brown hair pulled up in a neat bun. The most striking green eyes EJ had ever seen. The only indication she might not want to be here were her pursed lips. Pink and full, but sure as hell pursed. And those shoulders—so rigid she looked like she might blow over in the next stiff breeze.

He had the immediate urge to stand behind her and massage the stress out of that long, pale neck. But then again, he wasn’t her PT. Which was probably a good thing, judging by how his groin tightened at the sight of her. Jesus.

He glanced at Joe, who was grinning like a little kid who’d just been let loose inside Copper Mountain Chocolate Shop. EJ grit his teeth. The tension in the room was palpable.

“Jemma,” Joe said, his voice cracking a little. “You made it. You look…so different.”

The nurse nodded and left the room. The sounds from the bustling hallway seemed muted now and unimportant. The clock above Joe’s empty hospital bed dutifully ticked the seconds by, not caring that each and every one was more awkward than the last.

Jemma Banks looked from her father to EJ, her eyes settling on him in a matter-of-fact way.

“I hear you’re his physical therapist?”

Joe shuffled forward a few feet, pushing the walker along with him.

“What’s wrong with me? Jemma, this is EJ. EJ, this is my daughter, Jemma.”

EJ stuck his hand out and she obliged, shaking it quickly. But not too quickly for him to miss how soft her skin was. A total contradiction to those hard eyes. Her coat was as colorless and drab as an unfinished painting. For a second, he let himself wonder if she always dressed like this, or if she was just trying to make a point. Serious business. Get in, get out. No fuss.

“I’m sure you already know I’ll be helping my dad out until he’s better,” she said evenly. “But I won’t be staying with him. The nurse said that won’t be necessary, so I got a room at the Graff. You can reach me there if you need to.”

He nodded and looked over at Joe, who seemed tired all of a sudden.

“You know you can stay with me, honey,” he said. “There’s plenty of room.”

Her gaze shifted, and she swallowed visibly. “I’m just here to help out. I owe you that much, but you know how I feel. That’s not going to change.”

EJ had never warmed up to this idea. He thought it had disaster written all over it. Now, standing here in Joe’s hospital room, he knew he’d been right. This woman had no intention of letting her father back into her life, no matter how much he wanted it. But Joe was an eternal optimist and was hoping for a Christmas miracle of some kind. And as cheesy as it was, EJ hadn’t been able to talk him out of it.

“The Graff is beautiful,” Joe said. “You’ll love it there.”

“Okay,” EJ said, taking a deep breath. “I guess I’ll leave you to it, then. I’ll be by tomorrow morning to show you a few things and get you familiar with his exercise program. He’s a star patient. I know he’ll be up and around in no time.”

“I have to be up and around or I won’t be able to help with the Christmas tree,” Joe interjected.

“You can’t do it by yourself. You don’t have the eye.”

Jemma crossed her arms and looked from one man to the other. “What tree?”

“You ever heard of Mistletoe and Montana?” EJ asked.

She frowned, a little wrinkle forming between her brows. “Sure. Didn’t that raise money for some new pediatric hospital equipment last year? I saw something on the news.”

“And it’s a Christmas tree thing?”

“Businesses all over southcentral Montana pick a theme and decorate trees to be auctioned off at the dance every year in Livingston.” EJ shrugged. “Banks Plumbing and Mountain Physical Therapy used to team up until your dad retired. Now he just bosses us around with our tree.”

“We came in second place last year.” Joe was beaming. “This year is special, though, because the auction will be right here in Marietta. The Depot got double booked, so they chose the Graff for the venue. It’s a pretty big deal because the proceeds will benefit our hospital.”

Joe loved this damn auction. Loved this time of year, period. He’d dressed up as Santa last Christmas and helped the fire department hand out toys to needy kids in Bozeman. The man was a kid inside a seventy-year-old’s body. EJ wondered sometimes if that was why they got along so well.

She flicked some imaginary lint off her coat. “So, you’re friends,” she said.

Her eyes narrowed at that. Just slightly, but EJ caught it. Being a friend to Joe Banks wasn’t going to score him any points.

Christmas to the Rescue is available in the following formats: 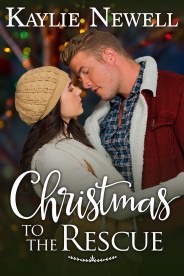 Did you know that Christmas to the Rescue and many titles are available digitally from Tule's own bookstore? Check it out!