Navy SEAL widow Holly McGuire returns to small town, Marietta, Montana, at Christmas time to close a chapter of her life and begin again. She’s not looking for a second chance at love or romance at this reunion of the ex-SEAL team’s Band of Brothers. There’s only one thing she wants for Christmas—a child of her own. She has a secret plan to make that happen, no strings attached. But she knows not everyone will be on board with her decision. Especially the very handsome Trey Reyes, her late husband’s commander and best friend.

Buttoning up the past isn’t what Trey has in mind when he welcomes Holly to town. Secretly in love with her since day one, Trey’s old vow to his friend to watch over her, come what may, doesn’t include enabling a terrible idea. Trey must take one last stand to win her heart and prove to Holly he’s exactly what she needs. And an unexpected bit of Marietta Christmas magic might be just the ticket to make that happen.

The female TSA agent held the two small vials up to the overhead fluorescents and gave their clear glass a suspicious shake. “What kind of ashes?”

“The husband kind,” Holly McGuire told her. That always got a reaction. She’d been through this before. Many times. At many different airports.

Predictably, the agent blanched and lowered the vials, swabbing them nonetheless, before inserting the piece of material into the explosives residue detection machine. The woman slid a look back at her that was almost apologetic. Almost.

“We still have to check, you know,” she said.

Holly gave her a sympathetic smile. “I know.” Over this past year, she’d often thought that Tommy would have gotten a good laugh at being scanned by the TSA for explosives residue, after a career disassembling bombs. No doubt he would have charmed the ID tags off the woman, as he had every female he’d ever met.

Then, he would have turned to her and winked, as if to confirm it was just his way and none of it meant anything. Maybe it hadn’t. To him.

It took another half hour to get through security, claim her bag, and find a cab willing to take her to Marietta. It had begun to snow and no one, not even cabbies, liked the pass between Billings and Marietta in the snow, which, it turned out, wasn’t so bad. The Christmas music from the cabbie’s radio distracted her, but despite how tired she was from traveling, she couldn’t fall asleep with her head tilted back against the seat.

When the cabbie started down the mountain, she checked her phone when it dinged with a text message. It was from Mick Chester. Her pulse picked up.

Mick: Arriving tomorrow night. You sure this is what you want?

Her: Yes. You’re not backing out, are you?

Her: I’m sure. Yes. She sent the text, then added, Thank you, Mick. Really.

Mick: At your service, ma’am. See you soon.

Holly grinned and exhaled sharply. She could imagine the teasing smile on Mick’s face as he typed those words. Bless him.

She leaned against the seat and tipped her head back, staring up at the starry Montana sky through the rear window. She’d known Mick…well, all of them, almost as long as she’d known Tommy. It had been inevitable that she’d choose one of the ‘Band of Brothers’—their name for themselves—for this. It only made sense. And, of the ‘brothers,’ Mick was the obvious choice. The least likely to object or have moral compunctions against her proposal.

Unlike some of them. Such as Trey.

She closed her eyes, picturing Trey’s dark eyes. The wave of his slightly long, dark hair. She wondered if he had started to go grey yet, like Tommy prematurely had. Or if Trey still looked like he could take any man in the room?

Or any woman he chose.

See? That was why she’d crossed Trey off her potential list. Exactly why. When she was near him, he made her knees go weak. Just thinking of him now made her anxious. He was dangerous in every way that counted. Honorable, handsome, reckless, and, like her late husband, driven by adrenaline.

The roil in the pit of her belly made her feel disloyal to Tommy. Which was silly, of course, since he’d been gone for nearly a year. But logic had no place in her world since her husband’s death. She was a stranger to herself. Alone again. Some days, early on, she’d felt underwater, invisible to everyone around her. Sometimes, she’d look in the mirror, surprised to see herself looking back. After years of being half of a pair, who was she now? Was there anywhere this jagged little puzzle piece fit anymore? And even though her marriage was far from perfect, it had been enough to settle for. Because it made her who she was. Even now, it shocked her that she’d become so very lost.

For a while, after his death, she’d sensed him around her. She would walk into a room and hear his laughter. Or anger would well up out of nowhere. And she’d know he was somewhere near, watching her navigate the choppy waters of his loss. The trip he’d sent her on, the long letter his lawyer had given her, was his last gift to her. And even though he hadn’t ever really shared his whole heart with her when he’d been alive, she knew, from that letter, that he had loved her. Truly. Loved her. Though she took little comfort from that now. And she hardly ever felt him around her now.

The slow unwinding of the tangle of her heart had taken place over this last year in places so remote she couldn’t have even imagined them before. But slowly, slowly, she had found herself again. Stepping off airplanes and boats and up the trails of mountains he’d once climbed, she had become visible again. Herself. And if there was one thing she knew for certain, it was that she never wanted to lose herself again. Which was why she’d decided on her plan.

She shifted her gaze to the Big Dipper, picking out the stars in the handle, then following them to the pot. Tommy would appreciate this beautiful view of his home sky. He would have loved it. And now, Trey was here, too. On Tommy’s urging, she supposed.

It was no secret Trey had made some kind of pact with her late husband years ago, when they’d been in the Middle East, to watch out for her if anything happened to him. And if she knew Trey, that promise hadn’t ended with the war. Exhibit A: his constant emails to check up on her in her travels. All very big brotherly. She knew very well that obligation was what Trey felt for her. And any sparks she’d ever perceived between them were all in her imagination.

Anyway, she was done with men like Trey and the others. Men who needed danger and all the things that came with soldiering and living life on the edge. Men who could shut down their hearts for war or whatever whim that took them away. She was alone now and fine. Which was why Mick was the perfect choice for her plan. The Peter Pan-est of them all. Hello, goodbye forever.

And why Trey couldn’t know. She braced to avoid any mention of this to him.

“Here we are, lady,” the taxi driver called over his shoulder as the Christmas decorations lighting up Main Street Marietta came into view. “Where do you want me to drop you?”

She hadn’t expected to feel nervous at seeing Trey again.

“Um…can you just drive around a couple of minutes more? Just circle the town a bit?”

“You sure?” In the rearview mirror, she saw his hairy eyebrows go up. “Meter’s still running.”

“Just a couple of times. Then I’ll be ready.”

“Whatever you say, lady.” And he took a spin left, past Grey’s Saloon and toward Riverbend Park.

Once a Hero is currently available in digital format only: 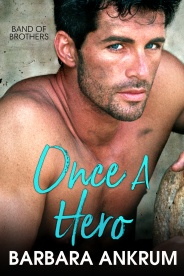 Did you know that Once a Hero and many titles are available digitally from Tule's own bookstore? Check it out!