Angels. Emma Cramer doesn’t consider herself an angel by any stretch of the imagination. Temporarily stranded, broke and unable to pursue her dreams of working in the big city following her mother’s death, Emma’s life changes when she rescues a small child and a puppy who get trapped in a garage where Emma’s truck has finally breathed its last . The girl’s relieved and grateful grandmother believes Emma has been sent by angels because her family needs temporary help. She offers Emma a job, a good salary and a place to stay until after the holidays. It seems like a Christmas miracle for both of them.

Angels often appear when least expected, but when the most needed. Cynical sheriff and rancher Cole Drayton has heard that all his life, but he’s never been in the market for much else. He can take care of his daughter, his ranch and his family on his own without his meddling mother, but his long protected heart and desire for isolation is no match for a beautiful stranded stranger and a misfit puppy who make his daughter laugh and him feel alive again.

Can unsuspecting hearts intersect at the moment when love and trust is needed most? Anything is possible with the magic of the Christmas season and faith in the Christmas angels.

“Charlie needs a mother and you need a wife. It’s high time you realized that.”

Cole Drayton slammed the milk carton back on the shelf and shut the refrigerator door none too gently. He let out an exasperated grunt in reply while trying to temper the words that wanted to fly from his mouth. They were words that would probably get his mother headed after him with a bar of lye soap in her hand.

He took a couple sips of the coffee to let his thoughts simmer down. He wished he had just kept going past the turnoff to the house and gone on to the diner in town instead of coming into his kitchen a few minutes ago for another cup of coffee. That was when he had found his mother already seated at his breakfast nook… lying in wait for him. A deep breath drawn inward gave him patience to maintain an even tone with her.

“I had a wife. It didn’t work out all that well, if you recall. We keep having this conversation and the outcome is always the same. I realize you mean well, Mother. But this is my life… mine and my daughter’s and—”

“And you want to keep your head buried in the sand. Look around you, Cole. You work from sunup to sundown. You weren’t busy enough helping your dad run the cattle operation while he farmed our place, you had to step in and fill Riley’s shoes as acting sheriff of this county when he got hurt in that car wreck a few months back. Your child is either with a daycare worker or me. And I’m getting older by the day and can’t do all the things with a child that a younger woman can. Not to mention this house needs a thorough cleaning more than once in a blue moon. It might as well be a hotel with all the lack of personal touches and the—”

“Running a ranch and being a sheriff, interim or not, doesn’t leave a lot of time for interior decorating. This house suits us just fine the way it is. Are you telling me that you don’t want to keep Charlie any longer? I’ll find someone to come in and take care of her if you need a break.”

“And where will you find a reliable person to do that between here and Frost Creek? It’s easy to say the words, but the reality of doing it is another story and next to impossible. There’re mighty slim pickins’ between the farmers and ranchers’ wives and the old maids. Most able-bodied, younger women are career-minded and drive into Austin or San Antonio to work or have gone off to college.”

“Exactly true with finding a wife… even if I ever wanted one of those again. Which I do not. Or do you have one of those old maids you mentioned in mind for the job?”

“It would be a heck of a job, too… putting up with the likes of your hardheadedness. She’d need the patience of Job and the hide of an Arkansas mule.” Mae Drayton’s voice softened as she gazed at the tall man leaning against the cabinet across from her. “Son, you’re working yourself too hard trying to escape something that isn’t there any longer. Pamela’s leaving you like she did shouldn’t color how you see all other women. Charlie needs a woman’s touch here and especially as she grows older. I’m not saying put an ad in the newspaper, but just open your mind to thinking about it and become more amenable. In the meantime, I’ll keep my eyes open for someone, too, who could come in here and help with Charlie and the house. And if I find someone, promise me that you’ll keep an open mind and give it a good try. Promise?”

That brought a pair of gray eyes straight to hers along with the scowl lines in his forehead. “No, Mother. You keep your eyes to yourself and do not go looking for more trouble for me. It’s time you left to pick up Charlie, and time I got back to work.”

He set the coffee cup into the sink and straightened, grabbing his hat off the back of the chair. Sliding it on his head, he moved to the backdoor, and then paused.

He gave her one more level look. “If you want to really help me out, find a good computer-literate person to get that mound of paperwork off my desk. The cattle accounts are behind going in the books by a couple of months or more since I don’t have the time or patience to deal with it all when I do get home. That’s something you can do with my blessing. As for the other… I mean it, Mother. Leave my personal life alone. I’m doing just fine on my own.” The closing of the door behind him put a period at the end of the discussion.

She rose and moved to the window to watch her son’s retreating back as he crossed to his white SUV with the markings of Chisos County Sheriff on its side. Just like his father. Cole was in a “mood” and needed some space. She knew him well enough to know he would head down the flat highway, let the window down, and turn up the radio that only ever played old rock ’n roll songs from the fifties. That had been his grandfather’s doing in teaching him to listen to the oldies stations from the time he could walk good enough to go off with him in the older man’s red and black truck… the same one he had restored and sat in the garage now. Her son needed some shaking up from the normal routine… heck, he needed just some shaking period!

Her mind was already working on a plan. She wasn’t certain what the plan would look like, but she had to do something. Her heart ached for Cole and little Charlie. The house was too quiet and too empty… even when they were both in it. Her son was moving through life but not living it. She had to do something and time was not going to slow down. She had to believe that somehow, someway an answer to her prayers would be sent. She just had to keep believing there was a miracle out there somewhere.

The Sheriff’s Christmas Angels is available in the following formats: 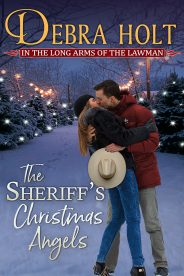 Did you know that The Sheriff’s Christmas Angels and many titles are available digitally from Tule's own bookstore? Check it out!