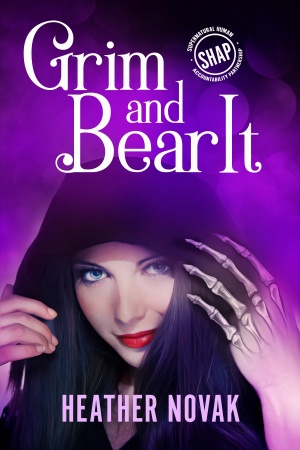 Grim and Bear It

Poppy’s skull over heels in love, and not even death can stop her…

Poppy Grim dreams of starring in a real-life rom-com. Instead, she’s an overworked, lonely grim reaper with chronic motion sickness from ferrying souls to the afterlife. She adheres to all the reaper handbook rules except one—she regularly visits the love she lost twelve years ago when she passed. She’s not worried—humans can only see her when they are about to die, after all—until Jake looks up and says her name.

Supernatural Investigator Jake Robinson wants to leave active duty because of past on-the-job injuries, but he’s determined to finish solving the most important case of his career first. His plans sink like the Titanic—his ghost roommate’s favorite movie—when he sees Poppy.

With death looming, they both risk everything—including their hearts—and work together to keep Jake alive while he stops the people threatening his family. But love is a losing game when the punishment for a reaper-human relationship is permanent removal from existence.

Rule #1: Reapers are forbidden to remain in contact with human persons from their human life.

I knew spying on the love of my life without him knowing was super creepy. In my defense, he couldn’t see me—I’d been dead for twelve years. But I could see him, and if I had saliva, I’d be drooling. Jake was wearing faded, paint-stained jeans and a tight white T-shirt. He sat in a beat-up computer chair, pushing himself around with his non-injured leg as he used a long pole to paint the twelve-foot walls in Blackburn House’s drawing room.

“Welcome back.” Sebastian, Jake’s ghost roommate who’d died in the mid-1800s, appeared next to me wearing his finest Victorian-era suit. I was a little jealous. The outfit I’d been wearing when I died was a bit embarrassing. But at least I got to cover it with a long purple cloak. “Enjoying the view?”

“Always. How’s researching the venom going?” I prompted. Sebastian and I had become close friends from my frequent visits, and he’d been keeping me up to date on Jake’s latest case with SHAP, Supernatural Human Accountability Partnership.

“Tedious,” he sighed, crossing his hands over his stomach. Sebastian worked as a ghost agent, often on the same cases as Jake. “But Jake’s good at what he does and there have been minimal complications.”

“Does he ever sleep?”

“You already know the answer to that. He has to care for everyone himself.”

I watched Jake’s back muscles flex with each pull of the roller and wondered what it would be like to wrap my arms around him and bury my face in his neck. Would he be warm and solid? Would he smell the same as he did in high school? Would his stubble feel scratchy against my skin? “That’s probably my fault for dying on him.”

“I’m not an expert on grim reapers, but I assume that you didn’t have much of a choice in the matter.”

I snorted. “You can’t pick your ancestors.”

Sebastian forced a smile but didn’t reply, a specialty of his when something hit too close to home. A light laugh filled the air and I looked over to see Mina, Jake’s former SHAP partner, wiping paint out of her blonde faux mohawk. Her girlfriend, Carma, was on the top of a very tall ladder with a dripping paintbrush in her hand.

I smiled as Carma blew Mina a kiss before scraping some paint off her brush. I was impressed at Carma’s lack of fear of being eight feet off the ground. I was dead and would still hesitate to climb up that high.

“Will I see you next week for Mina’s mother’s nuptials?”

Before I had a chance to answer, Reggie—Sebastian’s best friend and SHAP partner—poofed in at my other side. “Esqueleto, twice this month? Will you be at the wedding here next week? Mina’s mom is getting married.”

Sebastian crossed his arms. “I just inquired myself, but she has yet to respond.”

I smiled at Reggie’s nickname for me, skeleton. “Sí,” I promised, switching to Spanish. I knew five languages, like most reapers. Being multilingual made communicating with souls easier. Sebastian wasn’t fluent in Spanish, but in the year since Reggie’s appearance, he’d learned the basics.

Since his death, Reggie couldn’t speak to most of his family. When he found out I could speak Spanish, he had been thrilled, since most ghosts in Applechester, Michigan, only spoke English. While I had originally learned Mexican Spanish, I’d begun studying Reggie’s Guatemalan dialect and was getting better with every visit.

I nodded about Mina’s mom’s wedding. “Me encantan las bodas.” I loved weddings.

“Ya sabemos,” they both said in unison, exasperated.

I waved my hand and clucked my tongue. Whatever. I glanced at Reggie. “How’s Lola?” I asked in Spanish. “She stop trying to exorcise you yet?” Reggie lived with his brother Alan who had partial custody of Reggie’s niece Lola, who was very afraid of ghosts.

He lifted a shoulder. “She searched ‘how to talk to dead people’ instead of ‘how to perform an exorcism’ last week.”

We sat in companionable silence for a moment, watching Jake cover a hideous orange with a pink so light it was almost white. It made the room look bigger and I bet the sunset would make the color glow.

“He should’ve used a primer. The orange will show through,” I said.

Reggie waved away my concern. “Paint’s changed a lot in twelve years. There’s a primer mixed in. Promises complete coverage.”

That would’ve been awesome to have when I was trying to repaint my childhood bedroom from magenta to mint green. Jake had helped me put on three coats before we gave up and bought a primer. I wondered what the new owners painted that room. Probably something boring like beige.

I shrugged. “I tried to stay away, but I need to know he’s alive and well. I can deal with the memories.” Most of the time.

Sebastian tilted his head in question and I translated, before switching to English.

“Even if he can’t see you?” Sebastian asked.

I pressed my hand to my chest. “I hope he never can.” Humans only saw grim reapers when they were about to die. Jake seeing me would be the worst day of my unlife. Even worse than the day I died. “I hope he’s moved on, but I also hope he thinks of me,” I whispered.

I watched as Jake pushed himself to the back corner of the room, where an old bar used to reside. Now, it was little more than a discolored square of faded paint. Whenever our parents brought us here for Founders Festival tours or holiday open houses, we would always meet at the corner, where a large storage cabinet had hidden the rest of the room from view. Then we’d sneak off to the kitchens or to explore closed off rooms.

It had been the spot where he first took my hand when I was ten and he was twelve. Where he called me beautiful when I was twelve and he was fourteen. Where I waited for him at fifteen to show him my new holiday dress. Where he whispered, “kiss me,” despite our parents forbidding a relationship between us, and I pressed my lips against his for the first time. Every room in this house held a memory of us, but that corner held the most.

He dipped his roller into the paint tray then lifted it, pausing in midair.

“Jake,” I whispered, wishing for the five-millionth time he could see me, hear me, feel me, before desperately shoving the wish deep into the recesses of my dead heart.

He closed his eyes, shook his head, and continued painting.

Reggie leaned his head against my shoulder. “We can tell him about you, you know,” he whispered. “You don’t have to be a stranger like this.”

I laid my head back on his for a moment, then straightened and stepped away. “It does have to be like this. If he could communicate with me, I…” I shook my head at the thought. “I couldn’t… I wouldn’t…”

I didn’t need to finish the sentence. They knew. Sebastian looked out the large window, the crescent moon high in the sky. I recognized that haunted look in his eyes and wanted to ask but didn’t. Pushing him to open up would just make him shut down and my friends were precious commodities. I was an introvert by nature, something dying hadn’t changed.

Sebastian blinked before focusing on him. “Incorrect, sir. She’s my date. You have a boyfriend.”

Reggie winked at him. “Just checking if you were paying attention.”

I rolled my eyes. A sharp tug at the center of my chest silently warned me my break time was up. I blew them both a kiss and shot one last lingering look at Jake. “Miss you,” I whispered. He didn’t look over his shoulder as I disappeared.

Grim and Bear It is available in the following formats: 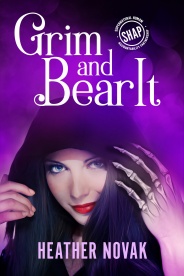 Did you know that Grim and Bear It and many titles are available digitally from Tule's own bookstore? Check it out!