When a strikingly handsome paramedic finds Kara Larsen‘s lost toddler, only to lecture her for failing to mind her child, Kara is embarrassed and relieved she’ll never have to deal with him again… no matter how good looking he is. Doesn’t he know being a single mom is a lot harder than it seems?! But when baby Nadia has trouble breathing one night, Kara’s frantic 911 call brings that same intense first responder right to her door…

FDNY paramedic Reid Bennett has a compulsion to help frantic parents. But after the way he reacted to the beautiful woman in the department store that day, she wants nothing to do with him. But when they bump into each other for the third time in a week, they both know there’s a spark that can’t be ignored…

And Reid thought he had no interest in long-term commitment. But when Nadia’s father calls out of the blue, Reid realizes he has some triage to do if he hopes to keep his girls…

Minutes ticked by, longer than hours. Finally, the buzzer sounded and Kara left Nadia in the middle of the living room floor, flung open the door, waited anxiously for the elevator to arrive on the fourth floor. She left the door open, went back to Nadia. Her feet and her hands were blue and her breath rattled in her tiny chest. Kara sat on the floor beside her, stroking the curls away from her face. She didn’t understand this. Nadia wasn’t sick until a few hours ago! She’d had a runny nose—that was all. She had a little cough and a runny nose. What happened? What the hell happened?

He frowned, bent to the floor and did his job. “Patient is lethargic.” He whipped out a stethoscope and inserted it in his ears. He lifted the baby’s shirt, listened to her heart and lungs. “No signs of rash. No fever. Inspiratory and expiratory stridor.” He tilted the baby’s head back, flashed his pen light into her mouth. “Airway’s clear but tissues are swollen.”

“Heart rate’s high,” his partner, Jacob Stewart, muttered. “How much does she weigh, ma’am?”

“She’ll be eighteen months old on the twenty-first.”

“Has she been sick?”

Kara spread her hands. “No! She was fine all day, until dinner. Then she started coughing and had a runny nose and acted strange. I gave her some cold medicine before bed.”

“She didn’t want me to put her down. She’s not usually a cuddler.”

“When did the breathing issues begin?”

“She woke up about twenty minutes ago, barking like a little seal. I ran the shower but the steam didn’t help. When I saw her hands go blue, I called 911.”

“You did the right thing, ma’am,” the paramedic reassured her. He unzipped his bag, pulled out a pediatric oxygen ball valve mask and handed it to Reid.

Reid gently placed the mask over Nadia’s nose and mouth and began rapidly squeezing the ball. The baby made a small protest and that started another coughing fit.

The other paramedic shook his head. “We need to transport. Now.”

“Sounds like croup, probably spasmodic,” the nice paramedic replied. “Your daughter’s airway is swelling shut. We need to transport her immediately to the emergency room for intervention.”

Kara stood up, ran to the bedroom, came back with a bag and began stuffing things inside it. Blanket, phone, keys, Nadia’s favorite Teddy bear. The paramedics packed up their gear, scooped up the baby, and moved for the elevator. Reid clicked the mic fastened to his shirt, began transmitting their patient’s vitals. “ETA, eight minutes.”

With their tiny patient safely aboard their rig, Reid continued to squeezed the bag over Nadia’s nose and mouth while the other paramedic drove, lights and sirens on. Beside the stretcher, Kara watched, crying silently. Reid cursed. “Ms. Larsen. Kara! Look at me.”

Kara raised damp brown eyes to his and instead of the annoyance and disgust he’d shown her earlier that day, she saw kindness.

“She’ll be fine. She needs some albuterol, maybe some epinephrine, and she’ll be just fine.”

Kara shook her head. “She…she wasn’t even sick. How am I supposed to know? Something was off today. I knew it, but I didn’t know what and I nearly lost her.” She pressed a hand to her mouth and squeezed her eyes shut.

Reid kept pumping air into the baby’s lungs with one hand, gave her mother’s hand a squeeze with the other.

The rig turned sharply and slowed to a stop. Nadia started to fight against the mask over her face.

“Hello, little Miss Nadia,” he said, smiling down at her. “Remember me?”

She reached up a pudgy hand and patted his face.

“Oh, you do remember me. That’s a good girl.” The back door opened and together, he and his partner directed the stretcher out of the rig and into the Emergency Room. Nadia was getting increasingly more restless and frightened. “Kara, sit up here and hold her. Try to soothe and calm her down,” Reid ordered.

Kara sat on the bed, reached for her daughter as Reid transferred her from the stretcher, still pumping fresh air past swollen tissue. “Okay, baby. You’re okay now. Look! What’s this?” She took her cell phone out of her huge bag and let the baby play with it.

His partner whistled from the nurses’ station. “Bennett. Ready to roll. Come on.”

Kara froze. Leave? No! He couldn’t possibly leave her alone. Not now. She knew what he thought of her. She knew he thought she didn’t deserve Nadia and he was right. But right now, she didn’t care. All she knew was that she was completely, one-hundred percent, unable to take care of Nadia by herself.

A nurse took the mask from him. He turned to leave and before she could think twice, Kara flung out a hand, gripped his wrist. Shook her head.

“Ms. Larsen?” Reid tugged his arm but she only tightened her grip.

Reid glanced back at Kara Larsen, put up a hand. “Yeah. Just a minute!” he called back. “Ms. Larsen, I need to get back to work.”

Kara bit her lip, shut her eyes. “Of course. I’m sorry. I know you have things to do, but please. You can’t leave me with her. I don’t know what to do. I don’t know what’s wrong with her! What if I make another mistake and it kills her?” She was babbling. She was almost hysterical. His muscles tensed under her hand and she knew she was clutching him hard enough to bruise but didn’t care. All that mattered was Nadia.

Kara blinked up at the man who held Nadia’s life in his hands.

“You got anyone you can call?”

With a nod and a tight-lipped smile, he took out his own cell phone, exchanged it for the one Nadia was now waving around like a rattle. “Go ahead and call. I’ll stay with you until they get here.” Kara took her phone and dialed Elena, but Lucas answered.

“Luke?” Kara’s voice cracked. “It’s Nadia. She’s having trouble breathing. No, not yet. We’re waiting for the doctor now. Yes. Yes, please! Thank you. Thank you. I love you, too.”

What? Oh. For a second, Kara thought Steve was there. “No, no. Lucas is my sister’s husband. They’re on their way.”

Reid only stared at her. “Shouldn’t you call Nadia’s father?”

Kara shook her head before he finished the sentence. “Nadia’s father took off the second I found out I was pregnant. I haven’t talked to him since. I’m not even sure he knows he has a daughter.”

“Gah,” Nadia said under her mask and Reid smiled down at her.

Kara gasped. Reid Bennett had a beautiful face when he wasn’t scowling. He caught her staring at him and she noticed she was still clutching his arm. She coughed, removed her hand like it burned. “Oh. Um. Sorry.”

A woman wearing a lab coat over scrubs walked in.

“Doctor Warren. Patient is Nadia Larsen, eighteen months old, twenty-two pounds,” Reid gave his report as soon as the doctor reached the bed. He caught his phone before Nadia chucked it to the floor.

“Mom, hold her still, please,” Doctor Warren ordered while aiming a light into Nadia’s mouth. The baby gagged on the tongue depressor and started to cry in earnest. Kara struggled to hold her still and steady but Nadia seemed to suddenly have eight arms and legs.

“Nadia, no.” Reid’s firm voice did the trick. The baby stared at him, but stopped fighting. He held down her legs while Kara restrained her hands so Doctor Warren could finish her examination. With their heads bent over Nadia, Kara noticed Reid had a day-old growth of stubble on his cheeks that did nothing to hide the sharp cheekbones and cleft in a strong chin. Now that he wasn’t scowling, she could tell his eyes weren’t brown as she’d thought. No, they were green with specks of gray and maybe even a bit of gold and—

Oh, God, they were pinned to hers. She looked away, at the strong hands holding her daughter. He had huge hands, but they were gentle on her daughter’s soft skin and for that, she was grateful.

It took nearly thirty minutes for Elena and Lucas to arrive. By that time, Nadia was sleeping, a mask strapped to her face administering steroids.

On jellied legs, Kara stood up to grab her sister in a fierce hug. “I’m so glad you’re here.”

“Of course.” Lucas squeezed her hand on his way to Nadia’s bed. He curled one limp hand around his finger, a muscle in his jaw twitching. “I’ve never seen her so still. Even when she’s sleeping, she’s active.”

Reid cleared his throat. “She’ll be fine. A bad case of croup. The doctor sedated her. They’re giving her nebulizer treatments. Steroids will open the airways, get her breathing normally again. You’re in for a long night, but she’ll be fine.”

Kara stepped away from her sister’s comforting hug and held out a hand that still trembled to Reid. “I know what you think of me. But thank you. For saving her. For staying with us.”

He squirmed, shifted, made a few non-committal sounds and nodded. He took a few steps, halted and then turned back, thinking of the grandmother Nadia had never met.

Help her, his brother had said.

He had and hoped it was enough.

The Paramedic’s Rescue is currently available in digital format only: 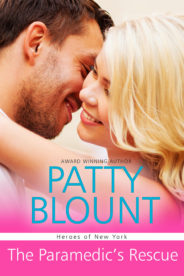 Did you know that The Paramedic’s Rescue and many titles are available digitally from Tule's own bookstore? Check it out!