Jeremy Engel has managed to claw his way back from the dark depths of personal hell. He’s now a successful comic book author and working on his second book. But when the woman he met while on a rare getaway—the one he hasn’t been able to forget—opens a shop in his neck of the woods, he thinks he’s even learned to trust and hope again.

Elizabeth Desmond is determined to make a success of her shop in the Adirondack tourist town of Lake Placid. And just when she thinks it can’t get any better, the mysterious stranger she kissed on a moonlit resort beach walks back into her life.

But when Jeremy’s old demons return, it’s up to Elizabeth to show him they’re not so different after all…

Elizabeth Marie Desmond gazed up at the ebony sky dotted with glittering stars and sighed, tipping her head back on the beach chair where she’d plopped fifteen minutes ago. Her grandparents’ golden anniversary celebration had been incredible, the perfect way to launch another memorable upstate summer filled with fun and family.

Until the attempted matchmaking had begun.

She sighed. Donovan Fitzgerald wasn’t a bad guy, but he was like all the others she had dated through high school and while studying at Harvard, eager to impress her and more than a little intimidated by her family’s name. No wonder she’d found it easy to skip the dating scene after grad school and focus solely on her career. She wanted more out of a relationship than merging healthy bank accounts.

Elizabeth wanted a relationship like her parents had, one filled with romance and excitement and fun. After searching for it the first few years of college, striving to be perfect so she could attract the perfect man, she had almost lost everything.

She had chosen a wait-and-see attitude ever since, but that hadn’t worked either, considering the big three-o was around the corner and she was still very much single.

That was how she ended up here, sitting on a secluded beach drinking alone instead of partying with her two younger sisters. She needed to reflect and make a new game plan when it came to her personal life.

She dug a hole in the sand with her espadrille, lost in her thoughts. She didn’t care for the idea of signing up with an online dating site, even though Claire had pointed out it had worked for a few of her girlfriends, and she didn’t want to meet any of Tory’s new single coworkers. Claire and Tory were right about one thing though. Her life was off-balance. That realization had hit her between the eyes. She couldn’t make the same mistake twice. She’d barely survived her last obsession. She’d spend the summer getting her life back on an even keel, having fun and socializing when she wasn’t working. Maybe it was time to look beyond her usual sphere of men, find someone outside her family’s circle, guys who wouldn’t be influenced or distracted by her family name. Who knew? Maybe she’d get lucky and find someone to love her for her.

Holding her breath, her mind ping-ponging between whether to fight or flee, Elizabeth stared at the corner of the high, stone wall and fingered the rape whistle Tory had thrust in her hand before agreeing to let her come here alone.

A tall figure appeared, the man’s features illuminated by the brilliant moon.

Was that surprise on the stranger’s face? Air rushed out of her lungs and she tucked the whistle into her shorts pocket.

He had stopped and was beginning to turn away, as if he intended to retrace his steps, but then shook his head of longish, blond hair and faced her once more. One hand stuffed casually in a trouser pocket, he indicated the empty beach chair next to hers with the other. “Seat taken?”

She shook her head, intrigued, watching him from behind the veil of her long brown hair.

He sat, long legs sprawled in front of him, toes of black dress shoes dipping into the sand. He clasped his hands—no sign of a wedding ring—behind his head and heaved a long sigh. His cologne wafted by on the night air.

He was quiet beside her, with only the gentle lapping of the waves and distant beat of dance music from the bar to fill the silence.

She tried again. “What brings you to the Sagamore? I heard there were three celebrations here tonight. I assume you must have been at one of the weddings. Did you have a nice evening?” She glanced at his suit. Armani? Hugo Boss? No.

He gazed at the open night sky without so much as glancing her way. “I hate small talk.”

A shiver of awareness ran through her at the deep timbre of his voice. This man was definitely different.

She took a calming breath. “Highly overrated, although it’s likely a necessary evil.”

He continued to stare at the twinkling lights overhead. “How’s that?”

She followed his gaze and breathed in nature’s beauty. “If we don’t do the small talk, get to know people on the surface, how will we ever know whether they interest us enough to enjoy their company at a deeper level?”

She turned to peer at his profile against the dark background. “I mean, don’t you think it’s kind of odd when a person you’ve just met tells you their life story?”

He scrubbed a day’s growth of stubble thoughtfully. “I’d much prefer that to meaningless descriptions of the weather or feeling required to ask a relative stranger about their day. Frankly, I don’t care and can’t really do anything about the other person’s emotional state even if I was the empathetic sort. Why not skip it all and get to the meat of it? Time’s too precious to waste on the insignificant.” He paused. “Like when I’m writing, I dive as late into the action as possible then get out as soon as the important part of the exchange is finished.”

She nodded, absorbing that tidbit of information. So…the stranger was a writer, an artist of words, polar opposite to her, a no-nonsense entrepreneur. “No set up, no slow build-up, or getting to know the characters?”

“I weave that in through dialogue and description.” He shook his head. “I prefer to immerse the reader in the conflict straight off. It’s the honest thing to do.” He turned to her with a smile that could melt an Adirondack pond in February. “No warming up period necessary.”

She thrilled at the increasing tug she felt toward the stranger sitting beside her, the unfamiliar tingle up her thighs and the slow, pulsing growing need within her core. This stranger, this man left her feeling anything but uninspired.

She squeezed her knees together and struggled to focus on their intellectual exchange as opposed to her visceral response. “Maybe that works for fiction, but in the real world I prefer to get to know people gradually, peel back the layers of their personality, their history. I haven’t read much lately because of my business, but perhaps I know your work?”

He scanned her from head to toe. “I doubt it.” His tone was sincere, his mouth turning upward into a suggestive smile. “You don’t look like a pre-teen to me.” He shifted toward her in his beach chair and locked eyes. “What do you do that keeps you so busy you can’t enjoy a good book?”

She tilted her head at him and smiled, pleased when she heard his quick intake of breath. Finally. He’d noticed her. “I believe your question may qualify as small talk, but since you shared that you’re a writer, I suppose it’s only fair to tell you what I do.” She maintained eye contact as she sipped her wine, the black currant notes dancing along her taste buds and ending with a pleasant tannin finish. She’d bet her new store he tasted even better. “I own an online athletic retail shop.”

He drank her in with soulful, blue eyes and leaned forward. “I’d ask you its name but I don’t shop online or surf the internet much, takes away too much energy from my creativity.” His gaze fell to her mouth. “Although…I’d love to sap some of my energy with you.”

His invitation hung between them as she took a final, languid sip. His voice was sexy, deep and throaty with that upstate drawl so familiar to her from a lifetime of summers spent in the Adirondacks. He wore a white dress shirt under that black jacket and tie. Brooks Brothers? No. That wasn’t right either. Her breath caught at the back of her throat as the haze that had covered the moon for the past few moments passed, allowing the moon’s pale light to further reveal his features. His straight, blondish hair touched his starched collar and diamond studs glinted in each ear. He reminded her of her favorite Aussie country rocker, only a dozen or more years younger. She imagined, like the singer and guitarist, this local boy had tats.

She’d never talked to a bad boy. The man lounging next to her might be wearing a suit and tie, but it only accentuated his wildness. She took a shaky breath. Maybe he was the perfect guy for a night like tonight—an anonymous stranger—who didn’t need to know her name. She wanted to kiss him so badly she could taste it. He was everything free and masculine and tender and kind all rolled into one. How she knew that she couldn’t verbalize, but she shivered with awareness again, contemplating just how good it could be between them.

The sensible part of her was shocked at her train of thoughts. She knew nothing of the man’s background or his aspirations. But the independent, vibrant woman within her was cheering. Life was for the living, and she was alive. So what was she waiting for?

She set her empty glass in the sand beneath the chair and smiled at him, pushing away the last of her reservations. “For the sake of avoiding small talk and getting right to it, all I can think about are my lips on yours.”

She bit her lower lip in nervous anticipation. “The night’s too perfect to spoil with inconsequential details…like our names or day job demands or where we hail from.”

Electricity thrummed between them, a tingle zipping through her while liquid heat pooled between her thighs. Was this the feeling she’d been missing her whole adult life? “Sooo…you mind if we kiss?”

“Not at all.” With that, he erased the millimeters of space still separating their lips, his touch soft and searching at first, getting to know her in that man-to-woman sort of way before moving in harder and more passionate.

She opened her mouth to him and their tongues tangled, their privacy protected by the beach’s high wall. His heat, surprisingly sweet, matched the expression she’d glimpsed in his silvery, blue eyes moments ago as he’d watched her swallow the last drops of her wine. She sighed, moving into his embrace as he leaned over the arm of his chair and caressed her shoulders, down the length of her bare arms. Don’t think. Just feel. She let her fingers roam through his silky mane, pulling him closer. She never wanted the kiss to end.

The Rebel’s Redemption is available in the following formats: 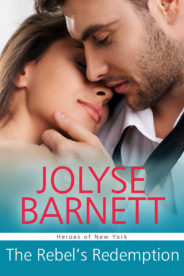 Did you know that The Rebel’s Redemption and many titles are available digitally from Tule's own bookstore? Check it out!