Defense attorney Ethan Milner is well-paid for his ability to charm a jury while ruthlessly slashing the prosecution. He’s living life in the fast lane, until he’s slapped with a reckless driving charge and sentenced to 40 hours of community service on a crime watch patrol. Now he’s under the thumb of the chairman of the city’s crime watch council – a no-nonsense woman determined to make him pay his debt to society.

Sandy DeMarco is familiar with Ethan’s professional character, as well as his notorious “bad boy” reputation with women. Still, when her quiet neighborhood is shaken by a brutal murder and an employee of hers becomes the prime suspect, she knows the accused’s only hope is the man who will win at any cost. Working alongside Sandy, Ethan feels the spark of attraction that ignites into love – even as a killer burns to silence them both.

Ethan Millner hit the gas and sped his Porsche past the last traffic light in Tolosa, Texas, leaving the city behind. He raced down the deserted two-lane highway, accelerating until he’d blown past the fifty-mile-an-hour speed limit and was heading for sixty.

Even though the sun had long since disappeared behind the towering pine trees that lined the road, still the choking heat of the Texas summer made it hard to catch a breath without searing a lung. Any sane man would have put up the top on the convertible and flicked on the air-conditioning, but Ethan didn’t want comfort right now. The landscape whizzing past him like a video on fast-forward suited his state of mind.

The blonde in the seat beside him ran her fingertips along the polished walnut of the passenger door, then turned to him with a satisfied smile. “Great car, baby. I do love convertibles.”

Almost immediately after the Randall verdict had been read, Ethan had left the courthouse, gone directly to Bernie’s, and ordered a scotch straight up. He’d downed it in a few gulps and ordered another one. Then he’d sat back to let the anesthesia take effect as he watched the Rangers game on the television above the bar.

Halfway through scotch number two, he’d answered a congratulatory cell call from his father, the one he always received whenever word got around to the old bastard that his son had put another check mark in the “win” column for Millner, Millner, Monroe, and Dade. Sometimes Ethan preferred the near-lethal dose of silence he got on the rare occasion when he lost.

During the third inning, the blonde slid onto the stool next to him. He knew within seconds what kind of woman she was, and that was fine by him. He was long past messing with young law clerks who gave him million-dollar smiles paid for by their rich daddies. Women with kids to support who had desperation in their eyes and his money on their minds. Forty-somethings who’d gotten dumped by husbands with midlife crises that only twenty-somethings could resolve. Every one of them was drowning in her own sea of problems that sooner or later became his problems.

At this point in his life, only one kind of woman interested him—the kind who was beyond flowers and promises, who could be bought for a drink or two and a spin in his Porsche, who lit a cigarette after sex and reached for the remote to catch the last of The Tonight Show as he made his way out the door.

The woman swiped her windblown hair out of her face and gave Ethan a big smile. “You told me you wanted to do a little celebrating tonight. So what exactly is it we’re gonna be celebrating?”

He stared at the road ahead. “Winning.”

“Oh, yeah? Tell me I picked the right man and you’re talking about the Texas state lottery.”

“Not much to tell. I won. Saved my client from a prison sentence. That’s all that matters.”

“That’s funny. I thought justice was all that mattered.”

The woman laughed. Even as Ethan smiled right along with her, his hand tightened against the gearshift. Justice? He wasn’t sure he even remembered the meaning of the word. He’d simply done his job as he always did, with a competency that made his clients thank God for the day they’d coughed up the extraordinary amount of money it took to retain his services. Ethan had been taught from his first breath what mattered in this game, and if money was a way of keeping score, he was clearly winning.

Light My Fire is available in the following formats: 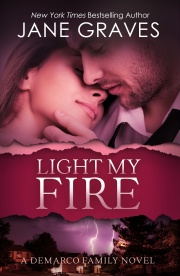 Did you know that Light My Fire and many titles are available digitally from Tule's own bookstore? Check it out!