On a humanitarian mission to fly doctors to a remote village in Mexico, pilot Lisa Merrick discovers something sinister lurking behind the organization in charge. Her plane is sabotaged, leaving her trapped in the Mexican wilderness with a price on her head and no way out. Injured and desperate, she contacts the one man she knows will help her: Dave DeMarco, a tough but compassionate Texas cop with whom she was once wildly in love.

Dave DeMarco is stunned when a woman from his past calls him late one night with an incredible story of smuggling, sabotage and attempted murder. Soon, though, his mission to rescue Lisa becomes a struggle for survival against an enemy who wants them both dead. When the danger they face clashes with the passion that still burns between them, Dave vows to protect the woman he never stopped loving – and keep her in his life forever.

“You think I won’t do it?” the man shouted. “Is that what you think? Well, you can damn well think again!”

Dave DeMarco bowed his head and let out a breath of frustration. This was not going well.

Five minutes ago, he’d pulled his patrol car onto Highway 4, heading back to the station after a particularly demanding shift, when the guy caught his attention. He was maybe fifty years old, sitting there in his immaculate suit, polished shoes, silk tie, and sixty-dollar haircut, just sitting there, as if he had nothing better to do than watch the world go by. And Dave might not have thought a thing about it, except that the place he’d chosen to sit was on a highway overpass, his legs dangling over rush hour traffic.

Dave had radioed the situation, asked for backup, then pulled his patrol car onto the overpass. He couldn’t say for sure whether the guy was serious or not, but most of the time if potential jumpers chose a public venue they were just attention seekers, hoping for somebody to give a shit long enough to tell them not to take a dive. With luck, this guy was one of those.

Right now Dave stood ten feet from where the guy sat on the retaining wall, easing as close as he dared. He ticked off the procedures in his mind: Get his name. Establish rapport. Keep him talking.

Dave held his ground, glancing down to the highway below, not surprised in the least to see that several cars had pulled to the side of the road to watch the festivities. And already they’d been joined by a Channel Seven news van. Wonderful. An audience. This was going to be a regular dog and pony show.

Not likely. If he really did have a death wish, the coroner would be zipping the body bag right about now. But Dave still had to play by the numbers. Patrol cops were taught to be patient problem solvers, and he’d always been damned good at his job. But right then, for some reason, he felt edgy and irritated, wishing the guy had chosen any overpass but this one on which to make his point. Maybe it had just been a very long day. Most days lately had seemed like very long days.

“Now, something tells me that’s not really your name. Try again for me, will you?”

“Okay. Tell you what. It’s a little dangerous on that wall where you’re sitting, and I’m thinking maybe you ought to get off it. What do you think?”

“I’m thinking maybe I ought to stay right where I am.”

“Okay, then. Tell me why you’re doing this. What’s the problem?”

Dave didn’t want to deal with this. He just didn’t. He saw a couple of patrol cars lining up behind his on the overpass, and if he could have handed this one off to anyone else he’d have done it in a heartbeat.

“Just get down from there,” Dave said, “and we can talk about whatever’s bugging you.”

“Yeah, right. Talk. Just how stupid do you think I am?”

Dave glanced at the gold band on the guy’s left hand. “Tell me about your wife.”

“So maybe they’d like their father alive. You suppose?”

He made a scoffing noise. “Right now I don’t know anyone who gives a damn if I live or die.”

“Now, Frank, you and I both know that’s not true.”

Dave started to say it. He started to say, You don’t really want to do this, do you? Don’t you know that suicide is a permanent solution to a temporary problem?

But as the words ran through his mind, all at once they sounded like some stupid cliché that even the biggest idiot on the planet wouldn’t buy. Lately he was having a hard time believing any of the bullshit he told people in his line of work: That if a husband and a wife would just calmly talk things out, they’d come to an understanding. That if a crackhead only went into rehab, he could kick that nasty habit and his life would be rosy. That suicide wasn’t the answer, because it was a permanent solution to a temporary problem. Had there ever been a time when he’d believed any of that crap?

The truth was that anyone who even thought about committing suicide just might have a few problems that were going to stay with him pretty much through eternity. Dave would bet his last buck that within days of the obligatory psych consult Frank would be back at it again one way or another, figuratively screaming at the world, trying desperately to make somebody else solve his problems because he sure as hell couldn’t.

Well, Dave had news for the guy—bold-type, front-page, above-the-fold news: He couldn’t solve them, either. Didn’t want to solve them. Christ, he didn’t even want to stand there and pretend that he did. As he continued to stare at this man who thought nothing of displaying his mental malfunctions for the entire city of Tolosa, Texas, to see, something inside him snapped.

Flirting with Disaster is available in the following formats: 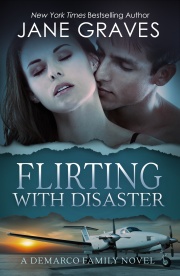 Did you know that Flirting with Disaster and many titles are available digitally from Tule's own bookstore? Check it out!