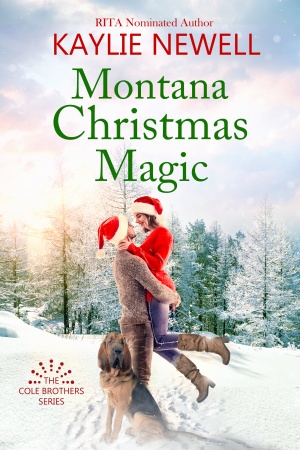 All accountant Griffin Cole wants for Christmas is stability. After spending his childhood traveling the world with his one-hit wonder rocker dad, he loves his quiet and unremarkable life in Marietta. Then the beautiful Raelyssa Woods knocks on his door. Her bold spirit immediately turns his predictable life upside down, and suddenly Griffin wants to ask Santa for so much more.

Rae Woods loves running her café in the small Montana town she calls home. She specializes in comfort food because she loves spreading joy to everyone she meets—two-footed or four. But after she impulsively takes in a homeless dog she names Noel, her big heart lands her in bigger trouble when her landlord threatens to toss her out. Grasping at holiday straws, she remembers a cute accountant who owes her a favor—and she happens to know he’s got a fenced yard and hidden soft spot.

When Griffin reluctantly agrees to foster Noel, he inadvertently sets in motion several Christmas miracles that neither he nor Rae could have ever seen coming.

Rae Woods made her way down the sidewalk, careful not to turn an ankle on any sneaky patches of ice. It was biting cold for late November—even for Montana, which was notorious for all kinds of cold. Especially the biting kind.

She dug her hands deeper into the pockets of her wool pea coat and turned to see Carol Bingly in her robe across the street. The older woman was bending to pick up her paper with a fluffy dog dancing at her feet. When she saw Rae, she straightened and waved.

“No car this morning, Raelyssa?”

Rae waved back. Carol never missed a beat. She was a nice lady but had a mouth the size of the Grand Canyon and would probably have a rumor going that Rae had gotten her license suspended by suppertime.

Carol smiled and nodded as if satisfied. She snapped her fingers to the little dog who was doing its business on a naked maple and headed back inside with her paper tucked underneath her arm.

Dipping her chin into her scarf, Rae plowed forward. It really was a gorgeous day. There were fat, steely clouds overhead, promising snow later. Probably the first heavy storm of the season. The air was crisp and clean, and the mountains in the distance were the color of grape soda against the sky. Rae breathed deeply. Marietta was pretty all year round, but it was prettiest in the winter. Only her opinion, but it was a hill she was willing to die on, nonetheless. She loved winter. Because winter meant Christmas.

She sidestepped a frozen puddle, and then another. And then what looked like a miniature river snaking its way from the yard to her right. Frowning, she turned at the sound of water running. Only running wasn’t the right word. Rushing was more like it.

She gasped. A burst pipe was spewing next to the cute little 1920s bungalow on the corner. Or maybe even from it. She couldn’t tell if the water was coming from inside or outside, there was so much of it.

Stepping carefully, she headed up the walkway and knocked on the front door. She rubbed her hands together in the cold, waiting for an answer. Nothing. She knocked again, this time louder, and leaned over to look through a crack in the blinds. It didn’t look like anyone was home. Which meant they were in for a heap of trouble.

“What’s going on over there?”

Rae turned. This from Carol, who’d made a reappearance in her bathrobe, and was craning her neck for a better look.

“Burst pipe!” Rae called back. “Do you have their phone number by any chance? I’m going to try and find the shutoff on the street.”

“Crap,” Rae muttered, making her way down the porch steps and over the water again. It splashed underneath her boots. Not the happiest thing to come home to—a broken pipe. She and her mom had been through this once; it had been right before Christmas her senior year. Flooded the living room and soaked all the presents under the tree. They’d spent Christmas with industrial-sized fans squatting all through the house, while her mom wrung her hands about how they were going to pay for it.

Frowning, Rae chewed the inside of her cheek and scanned the sidewalk for the trademark metal panel. If she couldn’t find it, she’d have to call public works, but who knew how long that’d take? In the meantime, this poor guy might be racking up thousands of dollars in damage.

Carol crossed the street, her pink robe swishing at her feet. “I have his number for emergencies,” she said, stepping up on the sidewalk next to Rae. “But no answer. Shoot! Look at all that water.”

“I know. And I can’t tell where it’s coming from.”

“It’s just a shame he’s not home. Out in California visiting his father. You know. The famous one.”

Rae wasn’t going to bite, which was exactly what Carol wanted. The poor guy’s house was flooding like something out of the Bible. Although, she had heard about the dad. The famous one. Everyone in Marietta knew about Eddie Cole. He was kind of a big deal.

“Carol, can you call public works? Hopefully I can find the shutoff before they get here, but just in case.”

Carol reached into her pocket and retrieved her cell, which she promptly stuck to her ear. Rae got the feeling Carol was in her happy place. On the phone, in a bit of a dramatic role. Which maybe wasn’t fair. But still.

Rae scanned the sidewalk again, then narrowed her eyes at a metal panel a few feet away. With all the frost and ice, it had blended.

Carol looked over. “Oh, oh, wait just a second,” she said into the phone. “We might not need you. Hold on…”

Rae bent down and pried the panel off with frozen fingers. Inside, was a dark hole, probably full of too many creepy crawlies to count. But right there, covered in cobwebs, was the water valve.

She looked up at Carol and beamed. “Found it.”

“Oh, good on you, honey.” Carol turned her attention back to her phone. “Found the shutoff, but thanks. You don’t need to come.”

Refusing to think about whatever lurked inside, Rae stuck her hand in the hole and turned the rusty valve, which squeaked in protest. She looked back up and saw the spouting water die down to a trickle.

Carol put her phone back in her pocket. “It got so cold last night, it’s no wonder.”

Rae slid the metal cover back over the hole, slapped the grime off her hands, and stood back up to survey the damage. Overall, it didn’t look too bad. Lots of water in the yard, but from what she could tell, the house itself seemed to have been spared. Hopefully.

“Carol, thanks so much for helping. I appreciate it.”

“Thank you for finding that shutoff. I’ll be sure to let Griffin know what happened. He should be back in a few days.” Carol crossed her arms over her considerable bosom and frowned. “These trips out west are few and far between. I don’t think he has the best relationship with his dad…from what I can tell.”

Rae nodded, mentally translating from what I can tell, to what it really meant, which was from what I could get out of him.

“Uh…no, I don’t.” That wasn’t entirely true. She knew of Griffin, just like she knew of his famous rocker dad. But the man seemed to be a Cole in name only. Tall, rangy, super clean-cut, possibly even a little nerdy, Griffin Cole was a quiet accountant who had an office over by the library. He and his two brothers had been sent to Marietta as kids, so the story went, to live with an aunt while their father toured the country singing his Christmas hit from the nineties that had made him a household name. So, no. She didn’t know Griffin. But she knew enough to get by.

Rae smiled and raised her brows. If she didn’t know better, she’d think Carol Bingly might have herself a little crush.

Carol laughed. “Stop. I could be his mother.”

Rae looked at her watch. At this rate, she’d be late for work. “Ohh. I’d better get going.” She headed down the sidewalk, waving over her shoulder. “Thanks again!”

It wasn’t even December yet, but as far as Rae was concerned, it was never too early to get excited.

Montana Christmas Magic is available in the following formats: 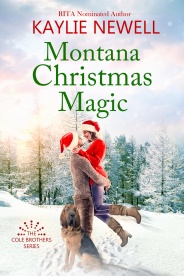 Did you know that Montana Christmas Magic and many titles are available digitally from Tule's own bookstore? Check it out!