Can the man who saved the day win her heart?

Quinn LaFayette is in her inaugural year as library special programs director of Last Stand, but when the kickoff performance for the children’s summer program goes terribly wrong, she has to save face as well as her job. She has a surprise advocate in Cole, whom she did her best to ignore in school. Seven years has only made Cole more appealing, but Quinn is determined to resist the sparks that fly between them because they are too different.

Restaurant owner Cole Hutchinson is no bookworm, but thanks to his fast-thinking antics, he ends up saving the day at the library and earning Quinn’s praise in the process. He’s tempted to seek more, but he’s juggling plenty of female attention from gracing the June edition of Modern Texas magazine featuring barbeque. Cole’s not interested in revisiting a woman from his past, but there’s something about Quinn that he can’t quite ignore.

Can Cole prove that opposites really do attract?

Cole Hutchinson raised the steel lid of the market’s barbeque pit, a plume of smoke rising in its wake. He reached into his back jeans pocket with his free hand, grabbing a red grease rag and waving it to clear the air. The day’s menu of briskets, pork loins, and sausage stared back at their pitmaster.

The pit’s lid locked into place as Cole surveyed the stars of the Monday menu at The Hut. He grabbed a long-handled utensil to poke the plumping sausage. He let out a slow whistle. “Perfect.”

Light laughter carried across the steam-thick atmosphere, tickling his ear. He turned away from his work and toward the sound coming from the area where customers could stand and make the choicest selections straight from the pit. A trio of attractive women watched him, their eyes giving indulgent looks.

And their gaze wasn’t on the meat.

“Hey there.” Cole lay the barbeque tool on the edge of the grill, away from the line of fire as he stowed the rag again into his back pocket. One of the women’s eyes dropped squarely to his chest, so he rested there a beat longer than necessary. “Welcome to The Hut.”

A sly smile curled across the lips of the blonde in the center, a petite and perky woman whom Cole hadn’t ever seen in his family’s restaurant. He knew his customer base, and something about the women’s carefully tailored outfits, bottle-dyed hair, and general style made them look decidedly like they were not from Last Stand. The blonde reached into a gaudy tote bag adorned with feathers across the top. Her overly accessorized wrist jingled with bangle bracelets that looked more constricting than hay rings on round bales.

She held a rolled-up magazine like a track baton before unfurling it for the women on each side of her to apprise. “We thought it was you.”

“Definitely you,” the voice of the woman to the right rang in response. All three lowered their mascara-heavy eyelids to compare the sight in their hands to the man before them.

“And he looks even better in person.” The blonde bit her lip.

Cole basked in the flattery. It had been less than a week since the magazine officially released, marking the cover-model debut for Cole and his older brother, Hutch, who were partners in the family business. The two young barbeque entrepreneurs of Last Stand were driving more traffic to the third-generation operation on Main Street than ever before.

Initially, Cole thought the increase in foot traffic was in response to his recent menu changes, a much-needed update of even more comfort foods to satisfy the taste buds of a wider variety of customers. But as new faces sought out the brothers themselves instead of focusing on the menu as their primary order of business, Cole owed the surge to Modern Texas.

“Thank you.” Cole dipped his head toward the gaggle in front of him before extending his hand. “I’m Cole. Cole Hutchinson.”

The women preened as each took a flirtatious turn in shaking his hand. Perhaps handshakes with a pitmaster while smoke, pepper, and seasoned salt swirled in the air wasn’t what the women were expecting. But Cole never met a stranger, especially in his line of work. He treated the women just like any other customers.

Any customers, that was, whom he wanted to impress.

Cole flashed his megawatt smile with more enthusiasm than usual and gave the women a tall drink of his good side to quench their thirst. After all, he needed to live up to the airbrushed photograph splashed across covers in grocery stores, bookshelves, airports, libraries, and in mailboxes for the month of June.

This was his way of achieving one of the golden rules of the food service industry—never disappoint the customer.

Cole settled his complete attention on the one at the center who held the magazine. “What can I do for you today?”

Bright eyes peeked at his from behind her heavy lashes. “You can sign this for me, as a start.”

“Happy to.” When a customer had first asked Cole to autograph a copy of the magazine a couple of days ago, he had done so sheepishly. Serving as a cover model for the magazine’s annual issue highlighting the best barbeque in the state wasn’t a perk he ever expected. Yet it didn’t take long for Cole to ease into the Hollywood role. Besides, it was perfect PR that not only jolted their current dining base but also solicited a brand-new wave of outsiders he hoped could be counted on for future sales. “Do you have a pen?”

The woman fished a manicured hand into her Lone Star State-sized tote. “Here you go.” She leaned forward to offer a lipstick-colored pen with rhinestone detailing. Her elbow brushed against her tight-fitting top, giving Cole a peek via the low dipping neckline as to what was underneath the slick fabric.

He pulled at the edge of his shirt collar. You’re at work. And it’s only the start of the lunch hour. He needed to keep attention on food, not flattery.

He snapped his focus back to the magazine and used the edge of the grill counter as a place to steady the pages. The pen’s click sounded like an audible exclamation point. He grinned at the women before he turned again to the glossy cover. Cole felt the women’s gazes move over him, glazing his skin with their heady attention.

Let’s have a little fun.

He squared his jaw.

And gave the women a long look at what they had come to see.

Cole struck a pose as he took his time signing his name and a “thanks for visiting” message atop the cover. “Can I interest you in some, um . . .” He pivoted back toward the trio, handing the magazine and pen to the blonde as she gulped.

Cole held her gaze and his unfinished question, knowing just how much time to let pass before he closed the deal. “Lunch?”

This was, after all, his business.

And he was no fool when it came to making sales.

The blonde’s face flushed as she tucked the magazine into her tote and righted the straps higher onto her shoulder.

The other two shifted their weight before one offered, “I am kind of hungry.”

“Yes.” The blonde cleared her throat as if this had been their plan all along. “Thank you. I think we will eat here.”

“I hope you beautiful gals brought an appetite.” Cole winked, hamming it up for them as he slid once again into work mode. Signing magazine covers, posing for selfies, and answering questions about the article was fun, but he had a family legacy to maintain.

After all, when the next issue of Modern Texas hit stands, he and Hutch would be old news. Women looking for a cheap thrill and fun capitalizing on the brothers’ fifteen minutes of fame would come and go.

Their business, however, was here to stay.

Cole served the women fresh from the pit before directing them to the buffet area of the interior. “Choose whatever side dishes and drinks you want.”

The women balanced their respective slabs of meat on thick butcher paper, teetering to keep themselves upright on heels that weren’t meant for graveled parking lots and rugged concrete floors. “You can meet my brother while you’re here.” The women’s eyes alighted as one called, “I think that’s him over there.”

They turned to make a beeline toward Hutch. Their expensive shoes made click-clack noises as they shuffled away from Cole, and their backsides sashayed in a triple threat of seduction.

Cole gave his brother a playful salute as he mouthed, “They’re all yours.”

Hutch nodded just as one of the women squealed, “It is you!” Cole turned his back and forked a brisket he had yet to unwrap, flipping it so the juices that had pooled inside the butcher paper could be reabsorbed before he released the meat and began slicing. Years ago, he used a meat thermometer and cooked by the book when it came to barbeque protocol. Now, after years of practice, he could simply watch the clock and judge the readiness of each piece based on sight alone.

More customers started pouring into The Hut, and Cole quickly found his rhythm in slicing and serving, dollar signs flashing before his eyes with each plate sold. “Don’t forget we’ve got some seasoning and sauces now that you can buy at the register.” Bottling a home version of the spice rub they used as well as a sealed version of their sauce that didn’t need to be refrigerated until it was opened was a new addition that coincided with the increase in foot traffic from the magazine feature. It had been Cole’s idea to sell these at the counter as a way for out-of-towners in particular to take a bit of The Hut back home with them.

Plus, the generous markups ensured they made a hefty profit on each sale.

Cole was already thinking ahead to holidays like the Fourth of July, Labor Day, and even Christmas. If they could roll out themed labels or special edition varieties, they could continue generating interest and new sales.

He had recently convinced Hutch that these small steps in expansion were worth trying. It wasn’t easy to bend his older brother’s ear and get a hearing for his ideas, but with menu changes and these bottled offerings, Cole had been persistent.

And, so far, the decisions were yielding rewards.

“This food was delicious.” The blonde led the trio of women like a queen on their way out of the dining area and past Cole to the parking lot.

Cole smiled at the compliment, but his lips stretched in satisfaction from ear to ear when he saw several container tops of seasoning and sauce peeking out of the woman’s tote bag.

Well done, Brother. It was the same strategy as retail with impulse purchases at the counter. Hutch helping to make sales near the register was the key to the whole idea working. “Come back and see us any time.”

“Will do, barbeque boys.” The women each gave a jazzy-fingered wave over her shoulder.

And Cole hoped, for the sake of the business’s bottom line, that they would do that.

Off the Market is available in the following formats: 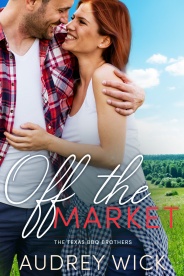 Did you know that Off the Market and many titles are available digitally from Tule's own bookstore? Check it out!