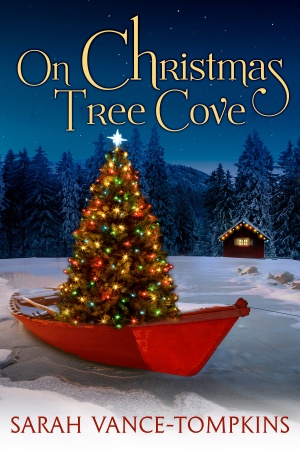 This Christmas calls for a special touch of magic…

December was always a special time for seaplane pilot Morgan Adair, but after losing her parents six years ago, the holiday is a quiet affair. When her siblings announce plans to sell the family home, Morgan longs to experience her favorite, now-forgotten tradition one more time: a lighted tree that, for over a hundred years, has appeared floating on a boat in the harbor every Christmas Eve.

The Taylors were always rivals to the Adairs in the once-thriving fishing village of Christmas Tree Cove, but Jesse Taylor was much more. He wanted to be understanding when Morgan set aside their plans to escape to Chicago in order to hold her family together, but his future as a successful freelance photographer soared on without her.

As Morgan dives deeper into the history of the mysterious holiday appearance, she discovers that true love has always been at the heart of the annual tradition. Can the wonder of Christmas and a few surprises along the way rekindle that love for Morgan and Jesse too?

Christmas Tree Cove looked like a snow globe right after it had been shaken. Morgan Adair couldn’t have cared less. Pushing through the front door of Hillcrest House, she dropped her keys into the green ceramic bowl on the antique wooden table by the front door, pausing for a moment to consider the little dish that served as the messy depository. On any other day, she wouldn’t have spared a second glance at her mother’s spare keys or her father’s tugboat key. They were innocuous bits of flotsam and jetsam in the busy life of the Adair family. But tonight, the keys nearly shredded her heart. She leaned against the door and took a deep, ragged breath.

The Alexa on the coffee table in the living room was still on, playing a soundtrack of Christmas classics her dad always hummed under his breath this time of year. Brightly wrapped packages had been placed in the space under an enormous Christmas tree in the front window. Her mom had so lovingly spent an evening right after Thanksgiving covering the tree in lights and filling its branches with ornaments, both new and heirloom.

Three nights ago, Dad had carefully laid the logs for a Christmas Eve fire. He’d carried the wood into the house in a canvas satchel, taking care to build a log pile with kindling on the bottom and finishing with beautiful, paper-skinned birch logs on the top.

Six fully stuffed stockings were hung from the mantle at perfectly measured intervals. Morgan, her brother, and their two sisters were all old enough to know the truth about Santa, but they still looked forward to opening stockings on Christmas Eve after church.

Christmas at Hillcrest House was canceled.

The stockings would be ignored. The presents would go unnoticed for weeks, before being unwrapped and unceremoniously returned to the stores. All of the preparations. All of the decorations. None of them would be appreciated. In the blink of an eye, her family’s lives, and the holiday, had been forever altered.

It was as if she was attempting to walk through gelatin. Every step took so much effort.

Had it only been four hours? The casserole she’d been preparing was on the counter, still waiting to be put in the oven. The cheese on top was congealed and hard. The Christmas pie she’d taken out of the pie safe had fallen, and the whipped cream had separated. Everything needed to be cleaned and put away, but it was too overwhelming a task to face.

She turned back into the dining room. Her heart skipped a beat. She’d been standing in exactly the same spot four hours earlier when the sheriff said her parents were dead.

Morgan’s legs could no longer support the weight of her body. She dropped to the floor. Wrapping her arms around her knees, she rocked back and forth, fighting to hold back tears.

When she finally wore herself out, her feet were burning with wet cold. She hurried up the curving staircase to the second floor, down the long hall, and up the cramped wooden steps into her teenage lair to change her jeans and socks before Eli and her sisters came home.

She kicked off her jeans, picked a dry pair off the floor, and pulled them on. She fumbled in a dresser drawer for a clean pair of socks, then sat down in the window seat of the tower room’s nook to discard her clammy socks.

Her tower bedroom was the only room on the third floor and the smallest in the house, but it had the best view of the harbor in all of Christmas Tree Cove. The windows were streaked with ice and snow, but colored lights in the harbor, sparkling and reflecting off the water, drew her eye. She pressed her face against the glass to see if her eyes were playing tricks on her.

No. She could see it. An evergreen tree, covered in brightly colored lights with a golden star at the top, was floating in a small dinghy on Christmas Tree Cove. Her heart skipped a beat.

It was her favorite Christmas tradition. One she shared with her mom. Morgan closed her eyes as memories of Christmas past washed over her. Wrapped up in warm blankets and homemade patchwork quilts on this window seat when she was a little girl, Morgan and her mom would keep an eye out for Santa in the night sky.

When Morgan was more grown up, she counted on spending those magical moments on Christmas Eve with her mom—just the two of them—looking out over their beloved cove before the chaos of Christmas morning.

Mom would make hot cocoa and buttered popcorn as a midnight snack. Snuggled together when everyone else was already in bed, they’d wrap their hands around steaming mugs to keep their fingers warm when the cold lake air rattled the windows.

The lighted tree in the harbor symbolized everything Morgan loved about holiday celebrations in Christmas Tree Cove. She closed her eyes. If only she could turn back time . . . if only for a few hours. Then she stopped herself.

She still needed to tell Eli, Dacey, and Kayla what had happened. She needed to put her emotions away for safekeeping, like Mom always did with her baked goods in the pie safe in the kitchen. Morgan took a deep breath.

Staring at the Christmas tree in the harbor, she touched her fingers to her lips, bringing back the memories of the sweet kisses she’d shared with Jesse Taylor that afternoon in Fish Village. The promises they’d made.

In the freezing rain on the bench behind Obermeyer’s shanty, she and Jesse had made a commitment to build a life together. He’d been accepted to the graduate program at the School of the Art Institute of Chicago, and she’d secured tuition reimbursement from a major airline for the ATP pilot training program. They’d found an apartment and planned to tell their parents they were going to live together.

“Maybe we should tell them we’re only friends,” she suggested. “Slowly ease them into the idea of a romantic relationship.”

Jesse shook his head. “We’re not kids. They can’t be surprised that we’re in love. They’ll probably be glad that we have each other in Chicago rather than going it alone.”

“You want to tell my dad we’re dating? Are you crazy?”

“Point well taken.” He’d pushed his glasses up his nose and brushed his fingers through his dark curls in one sweeping motion. “Despite the fact that your dad may kick my ass from here to tomorrow, we should tell them. No matter the consequences. We’ve been keeping us a secret for too long.”

Morgan nodded and leaned her head on Jesse’s shoulder. Her breath hitched.

“What do you love more? All the twinkling stars scattered across the midwinter sky? Or the lights reflected on the water from the tree on Christmas Tree Cove?”

Jesse’s answer never changed. And he never hesitated. Which both thrilled and frightened her.

Morgan shook her head to come back to the present.

She’d have to break her promise to him. Jesse would be hurt, but it didn’t matter. Nothing mattered anymore. Eventually, he’d forget her and move on. She needed to focus on keeping her family together.

“Hey! Is anyone home?” Eli shouted.

A few seconds later the tinkling brightness of her sister Kayla’s voice joined his and stabbed Morgan through her already broken heart. She was going to be the one to tell them the truth.

“What’s going on? Where is Morgan?” Dacey demanded. Her siblings were home.

“She hasn’t gotten around to setting the table yet?” It was Kayla. She must be in the dining room. “Where is she? What has she been doing? The casserole isn’t in the oven either.”

“Turn on the oven and help me set the table,” Dacey said with a sweet giggle. Morgan could hear the metal sound of silverware being handled. “Can you light the fire, Eli?”

Their lives had changed. They didn’t know it yet.

She took a deep breath. She would be a rock for her brother and sisters. An unmovable force that they’d have in their corner, no matter what obstacles were thrown in their path. Morgan bit her lower lip, casting one last wistful glance back at the lighted tree floating in the waves in the harbor. Then she left the comfort of her tower bedroom and went downstairs.

On Christmas Tree Cove is currently available in digital format only: 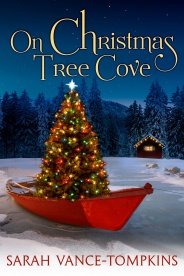 Did you know that On Christmas Tree Cove and many titles are available digitally from Tule's own bookstore? Check it out!