Guardians of the Isles, Book 2 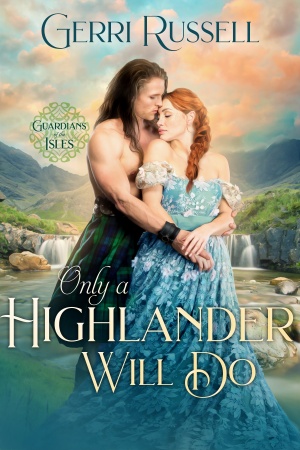 Guardians of the Isles, Book 2

Only a Highlander Will Do

Enemies and lovers are but two edges of the same blade…

Tormod MacLeod vows revenge on the MacDonalds, who brought war to his clan’s doorstep. Gathering a company of men to attack the MacDonald home, Tormod discovers a beautiful red-haired lass being taken to marry Garrick MacDonald, the clan’s heir. Tormod kidnaps the fiery beauty to be his own bride—and to torment her dastardly fiancé.

Fiona Fraser is forced to leave everything familiar when her father pledges her to a man she’s never met. But before she can meet her groom, whose cruel reputation precedes him, she’s taken hostage by a vengeful Highland rogue. Fiona’s given three days to decide her fate—marry the imposing soldier who imprisons her but ignites her passion, or choose a different MacLeod.

When Fiona hears her father is a hostage, and the MacLeods have breached the barrier between the human and fairy worlds, she’s forced to make a terrible choice to save her people and home. Can Fiona and Tormod put aside their family bonds and clan loyalty for the love they feel for each other?

A lone horse and rider galloped at breakneck speed towards the castle gates. From high on the north tower of Dunvegan Castle, Tormod MacLeod watched the approach, waiting until the pair were a little closer to see if he could identify his brother, Orrick. Or if the rider was someone else.

That there wasn’t an army behind the rider eased some of the tension in Tormod’s shoulders. The MacDonald clan would not attack Dunvegan this morning. Each day since Tormod had led an attack on the MacDonalds after what the clan did to Gwendolyn, his brother’s wife, Tormod’s anxiety built, and he wondered when or if their enemy would retaliate. For three hundred years the pattern of strike and retaliation remained unbroken, with neither side willing to put an end to their feud.

As the rider approached the gate, Tormod signalled for the gatekeeper to raise the portcullis. Tormod was in the courtyard by the time the rider entered and came to a sudden halt. “What news have you?”

The young man drew in a ragged breath. “Dunvegan village. It is under attack.” He paused to draw another breath. “’Tis the MacDonalds. They are slaughtering everyone.”

His worst fear had come true. “A call to arms!” Tormod shouted to the guards nearby.

Men and horses filled the courtyard. The MacLeods had prepared for this moment in the past few weeks. Alastair, the laird, appeared on his big, red stallion, leading Tormod’s black charger by the reins. “The MacDonalds?”

“Aye.” Tormod swung up onto Midnight’s back. “Orrick is there.”

“Our brother is a formidable opponent,” Alastair said as though trying to convince himself.

The two brothers hurried through the castle gates with fifty heavily armed men. Free from the enclosed space, they pressed their horses into a run as they headed south towards the village.

Tormod’s body tensed, his gaze seeking out the village in the distance. Orrick was formidable, aye. But how could he fend off an entire army himself? God’s blood! Tormod hadn’t seen it before, but now he could make out a hazy greyness in the sky that indicated fire.

Even at a full gallop, it would take them ten minutes to make it to the village. Would anyone be alive when they arrived? Would Orrick? Tormod swallowed against the tightness in his throat. He couldn’t think that way. Orrick was resourceful. If there was a way to survive, his brother would find it.

“Nearly there,” Tormod said from between his teeth as they neared a rise in the road. Instantly, the whisper of frantic voices came to his ears.

He urged his horse to a faster pace, racing over the rise and down into the village below. The scene before him became merely a blur of images—spirals of smoke, charred remnants of wood where houses used to stand, motionless bodies upon the ground, while others in singed clothing wandered in states of dazed confusion amongst the ruins of the village.

The MacDonalds were no longer in sight. The villainous clan had attacked, then departed before the MacLeods arrived to exact revenge. Tormod’s stomach roiled at the scent of burning wood and human flesh. A wrenching sadness mixed with his rage as he gazed at the ruins.

Bringing his horse to a stop, he dismounted beside a mother and her two children who had been struck down. A finger laid against their throats confirmed what Tormod already knew. They were dead. “When will this madness end?”

Alastair slid off his horse and came to stand beside his brother. “It could end with us if we pursued peace.”

Tormod’s gaze flew to his brother’s. “Death and chaos are all around us, and you can honestly talk of peace?”

“How many more will die if we do not?” Alastair asked softly, knowing the two brothers had very different approaches when it came to dealing with their enemies.

Tormod turned away and strode into the midst of the village. “We must find Orrick and Mrs Honey. Only then might I entertain such a thought. But not likely.”

Tormod clenched his jaw. Alastair had put Tormod in charge of the castle’s defences—but that protection also extended to the surrounding villages. He’d been kept so busy at the castle with too many fires to put out that he hadn’t considered the villages. He’d failed these villagers. All of them.

The smell of earth mingled with the tang of the blood that had been spilt this day. Unable to restrain the pain and rage spiralling within, Tormod released an inhuman sound that reverberated through the village. When the sound died down and the edge of his pain subsided, the voices he had heard upon their arrival grew louder. He followed the sound to a group of men who stood beside a burning cottage.

At his and Alastair’s approach, two bedraggled men with soot on their faces spun towards them, their swords drawn. “Who are you?”

Unafraid despite their weapons, Tormod continued forward, his hands open at his sides in a motion of peace. “Tormod and Alastair MacLeod of the clan MacLeod.” Tormod nodded towards his brother. “We mean you no harm.”

Instead of relaxing, the men’s stances became more rigid and their gazes moved beyond where Tormod and Alastair stood. The sound of hoofbeats thundered.

Tormod twisted around, his sword drawn, ready to attack until he saw who approached. It was his brother, Orrick, with a limp and unresponsive Mrs Honey cradled in his arms. The gash at her temple indicated she had been injured, but Orrick appeared unharmed. “Praise heaven, you are safe,” Tormod said as his brother drew near. “Were the MacDonalds behind this attack?”

Orrick nodded. “They gave no warning as many of the villagers went about their daily lives.” He clutched Mrs Honey to his chest. “Of the forty-three villagers, I estimate nearly half are dead. The rest are injured, and certainly without homes.”

“We will take them all back to the castle with us,” Alastair said. “They will be safe there.”

“Are these men MacLeods?” one of the younger men before them asked Orrick.

He nodded once more. “They are my brothers.”

With solemn faces, Tormod and the two other men lowered their swords and returned them to their scabbards. “We’d heard the new laird had come home weeks ago.” The oldest amongst them turned an angry gaze on Alastair. “We’d hoped yer return would mean a time of prosperity fer us, nae destruction and death.”

“What happened here today is a tragedy,” Alastair said, his voice hard. “I am so very sorry for the loss of all those who died this day. What happened here will never happen under my watch again, I promise you.”

The older man’s face squeezed as if in pain. “Yer pretty words will nae bring any of them back tae us.”

Alastair touched the man’s arm in a gesture of caring. “Justice will come in time. Right now, we must bury the dead. Those who still live will be provided with any medical attention that is necessary, and a means to move forward with their lives.”

The man’s eyes narrowed. “And what of revenge?”

“Revenge has never resurrected the dead, and it will never solve the problem.”

“Then what do ye suggest?” the eldest villager asked.

Alastair’s eyes narrowed. “That we take care of this current crisis before we start another. As your laird and protector I will see this never happens to the MacLeod clan or anyone associated with it again.”

The old man’s bravado vanished, his face paled, and he took a step back as if he suddenly remembered who he challenged. “As ye will, m’laird.”

The tension in Alastair’s stance relaxed, but not for Tormod. As the cries of the villagers mixed with the pop and sizzle of the burning structures, Tormod’s right hand tightened against his thigh. There would be revenge for the MacLeod clan and soon, if he had anything to say about the matter. And since Alastair, the appointed heir, had put Tormod in charge of the defences of the castle and her people, he had quite a lot to say about what happened next.

He could wait until they helped those in the village find shelter at Dunvegan Castle, but once that task was complete, nothing would stop him from seeking revenge upon the MacDonalds, as the MacLeods had done for centuries.

Only a Highlander Will Do is available in the following formats: 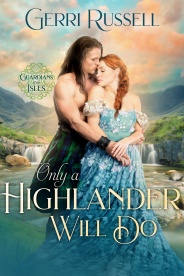 Did you know that Only a Highlander Will Do and many titles are available digitally from Tule's own bookstore? Check it out!