Sometimes doing the right thing can hurt those you love the most.

Nathan Starr has lived an honorable life. He married a good woman, raised a family, turned their struggling farm into a thriving business and founded a town in the process. But now, watching his children and grandchildren, he fears the next generations of Sweetheart, Montana, never learned about love.

Free-spirited Pansy Oppenheimer aches for her dear friend Nate. Although he stayed behind while she traveled the world, together they know this town and its secrets better than anyone. No one wishes a bright future for the Starrs of Sweetheart more than they do. Little does anyone know that they harbor a secret of their own…

The cherry orchards on the banks of Flathead Lake under a moonlit sky were a place of magic and romance. Boys and girls, sitting side by side, the air thick with words unsaid, kisses not yet risked, every breath, every moment so intense. So precious.

But on Grad Bonfire night, this same tiny portion of the Jackson Cherry Orchard was less a place of magic and romance and more of a raucous pit of raging hormones.

The high school never had a shortage of chaperones for the event, but problems only began after the adults left at the appointed hour, supposedly shutting down the festivities.

“I’m too old and frail for this,” said Pansy Oppenheimer, tucking her cardigan around her thin but sturdy shoulders. She stood on a gentle rise overlooking the mass of bodies dancing in the firelight below. She wasn’t the least bit frail and she’d never be too old for this.

“And they aren’t nearly old enough.” Nathan Jackson patted the lawn chair beside him. “I told you you didn’t need to come tonight.”

Nate had the timeless, rugged Jack Palance appeal, but she still pestered him to join her in her endless walking about town, worried about his heart health. And though Nate had once compared her to Christie Brinkley in comfortable clothes – a compliment she tucked away like a debutante’s treasured nosegay from her first dance – Pansy described herself as having the musculature, cardiovascular system and enthusiasm of a young goat.

“I’ll quit when you quit,” she told him.

He snorted and passed her a thermos of hot tea.

Unburdened by motherhood herself, Pansy happily took an interest in all the young people of her town and made a point of following the various events and dramas that played out around her. And Nathan Jackson’s family had always held a special place in her heart.

“Can’t let you wander around alone up here in the dark,” she replied. “You’d break a hip or something.”

Nate had taken to overseeing these goings-on back when he’d still been running the Jackson Cherry Orchard and had a naturally vested interest in it not being burned to the ground. Though he’d long since handed the business over to his son, old habits died hard.

Everyone knew that the after party was the real party. So, once a year, when the teachers set down the mantle of responsibility with a sigh of relief that their part was over, and parents locked up and went to bed, insistent in their belief that their kids weren’t the type to sneak out at night, Pansy and Nate took over.

“I put a box of condoms on the table beside the ice buckets,” said Pansy.

She waited for the inhale. Nate didn’t disappoint.

“If Robert finds them during the harvest,” he said, “he’ll have a heart attack. I hope you can live with that.”

Pansy loved Robert, of course, but it was her steadfast opinion that Nate’s oldest son had been born with a rough-barked cherry branch protruding from his nether cheeks.

She shrugged. “It’s not the first time these trees have witnessed shenanigans by those on the cusp of adulthood. He’ll survive.”

A low, raunchy chuckle rumbled up in her. Oh, there’d been shenanigans, all right.

“Will and Brett will see to it that there’s no evidence left behind, anyway,” said Nate.

Too bad. A little dose of reality would be good for Robert.

“Are they both working the harvest?”

Robert’s son, Will, and Brett, son of Nate’s youngest boy Hal, were currently being groomed to take over the orchard. Pansy, a strident liberated woman ahead of her time, who’d once railed that Nate’s twin daughters Jane and Cathy hadn’t even been considered as potential heirs to the cherry throne, didn’t bother asking if the granddaughters were in the running.

“Is it by choice?” she asked. “Do the boys want the orchard?”

“That’s their problem,” answered Nate with the wisdom of being a generation removed.

A comfortable silence descended between them, broken only by the catcalls, shouts and relentless music drifting up from below. The more things changed, she thought, the more they stayed the same.

Pansy – Aunt Pan as the younger ones liked to call her – surveyed the bodies sitting cross-legged on the ground, the planes of their faces dancing orange in the flickering light. So full of promise, so much anticipation and idealism. Jane’s only child, Jessica, and Cathy’s oldest daughter, Carrie, were among the celebrants and Pansy’s heart ached with vicarious pride.

Their lives lay ahead of them like a fresh, open road and a full tank of gas. Who knew what they might accomplish?

Then she frowned and stood up.

“Jessica Palmer!” she called. “Unless you’re being examined for poison ivy, the shirt stays down.”

The girl either didn’t hear, or was doing a dang good job of making it look that way. She had a wild streak and the poor boy she was with had no idea the world of heartbreak she was undoubtedly setting him up for.

“But you brought condoms,” observed Nate with a laugh. “Seems a little hypocritical to me.”

Nate had nothing to say to that. Janie Jackson had done her daughter no favors by choosing that Palmer fellow to father her only child. Wealth and status were fine. It turned out that marriage and parenthood weren’t what either of them wanted. Janie wanted a perfect princess. Instead, she got Jessica.

Carrie Logan, Jess’s cousin, was wound way too tight for her own good and had an overly involved mother for whom image was everything.

Jessica wanted to be an actress. Carrie wanted to be a photographer. Pansy wondered if the girls’ mothers realized that these careers in role-playing and image-making could be directly linked to the expectations put on them in childhood. But which of these girls wasn’t hampered by such constraints? Pretty Emma Stanhope, cursed with an honest-to-god beauty queen sister? Or sweet, rudderless Jacie Rose, finding her way despite a mother who considered herself incomplete without a man? Did Lilian Reynolds’s consistent honor roll placement shield her? Or Tina Carson’s bossiness?

No. While girls nowadays had more choices than she’d had at the same age, true freedom was as elusive as ever.

For boys too, sometimes, she admitted grudgingly, looking at Damon Brand. If ever a boy looked trapped, it was that one.

She leaned a little closer to Nate. Family could be the tightest trap of all.

Laughter rippled over to her from a group closest to the water. Pansy saw the glowing tips of cigarettes and smiled to herself, waiting for the coughing fits that would follow from the initiates. She assumed that beyond the rim of dancing light the kids were pushing other boundaries as well. She might be an old spinster, but she knew plenty about sex, drugs and rock ’n roll. The pillars of Cherry Lake would likely choke on their Metamucil if they knew just how much she’d indulged her own youthful curiosity.

So, despite her warning to Jessica, Aunt Pan wasn’t too worried about keeping anyone on the straight and narrow. Choose your battles, that was her motto. She just wanted them to stay out of the police station and the emergency room.

If they ended up in the delivery room nine months from now, well, the condoms were there. It wasn’t her fault if they didn’t use them.

And a surprise baby wasn’t the worst thing that could happen.

No, there were worse things. A lifetime of regret, for instance.

Nathan Jackson braced his hand under his jaw, observing his flamboyant granddaughter drape herself into some poor sucker’s lap, her long hair falling perilously close to the flames. It would serve her right if she got those locks singed off.

“I thought you wanted her to be accountable.” Pansy elbowed him gently. “She’s got hair to spare. A little campfire ’do won’t kill her.”

Jessica Palmer, daughter of Nate’s social-climbing daughter Jane, troubled him. Though both Jane and Cathy had chosen successful, wealthy men, neither match had brought his beloved daughters happiness. The price for their choices, he feared, was being extracted from his granddaughters.

Sins of the father being revisited on the children?

Perhaps, but whatever character flaws he saw in his children, however they trickled down now to his grandchildren, the responsibility was his alone. Mary was not to blame.

Mary had deserved far more than she’d gotten out of life.

Over at the campfire, Jess had moved on to a new lap and was flicking the ends of her perfectly unburned hair in the boy’s face while he laughed and tickled her.

He shook his head. “That girl will be the death of me.”

“She’s free-spirited.” Pansy smiled. “You love that about her.”

“And she’s set to run off as fast as she can. Just like you were.”

She was quiet, and instantly he felt bad. He hadn’t meant it to come out the way it did. It was supposed to be a joke. But even he knew there were some things you didn’t joke about. They’d come to an understanding, he and Pansy. So it wasn’t quite what he wanted. It was better than the agony of being without her. He could live with this.

“Sorry,” he said gruffly. “The time of year. It brings out the worst in me. Old patterns.”

She patted his hand.

His explanation wasn’t a lie, but it was a cop-out and he should have known Pansy would call him on it.

“Do you ever think you’ll fully forgive me for leaving?” she asked.

“There was nothing to forgive,” he said, choosing his words with care. Then, “I forgave you for leaving years ago, Pansy.”

“But not the other thing.”

Ah, he thought. The other thing. That one had stuck in him for a long time.

“It’s not that, either.” He shook his head. “Pansy, let’s not rake up that old muck. We got caught up in things that were beyond our control. Perhaps we made mistakes. We’re both human. Neither one of us intended to hurt anyone. I know that.”

But it was hard not to get drawn back into old memories when you could see them playing out again, in front of you. Different players, some of the details changed, but the same old heartache on the horizon. He wished he could warn his grandchildren, protect them from what was ahead, but without explaining how he knew so much about it, he couldn’t.

And some stories were better left untold.

Shameless Sweetheart is currently available in digital format only: 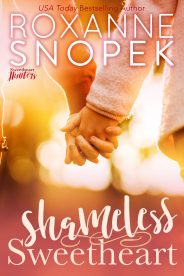 Did you know that Shameless Sweetheart and many titles are available digitally from Tule's own bookstore? Check it out!