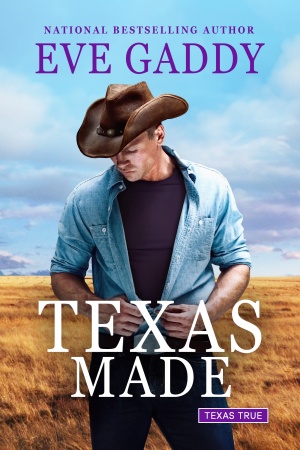 Rancher Marshall Walker isn’t looking for a woman—not permanently, anyway. He’s plenty busy raising beautiful Walker paint horses that are in high demand across Texas. But when his sister’s gorgeous friend arrives for an extended visit, he’s not opposed to exploring what could happen. He knows his heart is safe—Jaclyn Carson is a city girl, and he’s country through and through.

Jaclyn isn’t looking for a man, either. Owner and CEO of her own makeup company, she doesn’t have any desire to relax or slow down. With her condo under extensive renovations, she takes up her friend’s offer to stay at her family’s Texas ranch. Jaclyn’s more than a little curious to catch a glimpse of her not-so-secret college crush, and Marshall is hotter than ever. And his proposition—a steamy but very temporary affair—sounds like a fantasy come true.

What happens when two opposites fall in love? Can they meet in the middle or will they go their separate ways, even if it means breaking their hearts?

Marshall Walker might drive a 4X4 Dodge Ram pickup truck but he’d fantasized about having a Corvette more times than he could count. In front of the cottage that was back behind the barn on the Walker ranch sat a fire-engine red beauty, in perfect condition, and he’d bet it ran like a fire on steroids. It sure didn’t belong to their new ranch manager, Ella Slade. She drove an older model pickup. Plus, she’d moved out of the cottage recently to live with his brother Chase at the big house until their own house was finished.

“Whose red Corvette is parked by the cottage?” Marshall asked his sister Damaris, who was grooming her mare, Cinnamon.

Damaris looked at him over the mare’s back. “Oh, that’s Jaclyn’s. I told you she was going to stay with us for a while, didn’t I?”

“No.” If she had, he hadn’t been paying attention. “Jaclyn who?”

Jaclyn Carson? He hadn’t seen her in years, not since she was nineteen. She’d been a pretty girl, a model, Damaris had said. But she was his baby sister’s age. Which had made her too young and definitely off-limits. Then. “Jack’s staying here?”

“Jaclyn,” Damaris said, emphasizing the name, “is going to live with us until her condo is ready. The whole complex is being redone and she needs a place to stay.”

“Until her place is finished.”

That was informative. “I thought she lived in Dallas?”

“She does. But she needs a change of scene and we decided she should come here. She can work from here when she needs to.”

“She makes lipstick or something,” he remembered. “Why can’t she stay at a hotel in Dallas?”

“Because she’s staying here, in the cottage behind the barn,” Damaris said impatiently. “And FYI she’s the owner and CEO of a very successful makeup company. It’s called Divinity.”

“I thought that was candy.” He rubbed the back of his neck. Damn, of course he remembered Jaclyn. She’d kissed him, once, when she was nineteen and he was twenty-four, which was also why there had only been one kiss. But that one kiss had been hotter than most of the ones he’d had before or after. And Marshall had kissed a lot of women.

He kind of hoped she wasn’t as pretty as he remembered since he didn’t need the distraction. Then he turned around and saw her. She wasn’t pretty. She was absofreakinlutely gorgeous. Long, tousled blonde hair, clear green eyes set under dark brows and lashes, a perfect nose, and the most luscious, kissable lips he’d ever seen, painted as red as her Corvette. Holy shit, he was in trouble.

“Of course. Hello, Marshall. It’s good to see you again.” Her voice was sultry as summer, a smooth, silky contralto. She held out her hand and he took it. Her skin was soft but her handshake was firm.

She wasn’t nineteen anymore. This was a woman. A self-possessed, beautiful woman who could slay a man with a look—and knew it. She threw him off-balance. Women never rocked him like one look at Jaclyn Carson had done. He didn’t like it. He said, “Hi, Jack. Likewise.” Likewise? Had he really said likewise?

“Smooth as ever, I see.” She gave him a wintry smile and added, “Call me Jaclyn.”

She hadn’t liked the nickname at eighteen or nineteen and it didn’t seem as if she liked it any better now. Good. This woman had trouble with a capital T written all over her.

“Sure, Jaclyn,” he said, releasing her hand.

Damaris, who was a damn sight too observant, said, “We could use some help with Jaclyn’s stuff. If you’re not too busy.” The look in her eyes said he’d better not be.

Hell, he wasn’t scared of his little sister. Even if she did have ways to make him pay.

On second thought, he’d been on the receiving end of Damaris being pissed and it was definitely to be avoided.

How bad could it be? Since she’d be living with them, he’d have to be around Jaclyn so he might as well start now. Treat her like he did Damaris. That was the ticket.

Yeah, that wasn’t going to work. He didn’t, in any way, shape, or form, think of Jaclyn Carson the same way he did his sisters.

Damn it, Marshall Walker looked every bit as mouthwateringly tempting as he had years ago, when she was in college. The least he could do was have a potbelly, but no, he was every inch a lean, hardworking, sexy-as-sin cowboy.

His dark wavy hair was medium length, a little shaggy, like he needed a haircut. He had the same gray eyes, which she assumed still darkened or lightened with his mood. Perfectly sculptured features. Strong and manly. He hadn’t shaved, which only seemed to accent his good looks. Odd, since she preferred men to be clean-shaven. Which nowadays was pretty damn hard to find.

He was still single and, according to Damaris, there wasn’t a girlfriend in the picture either. Did that give her ideas? Yes, of course it did. She’d had ideas about Marshall since her college days, whenever she went home with Damaris.

Here she was again, trying out country life. Lord knows she wasn’t cut out for it. Her idea of hard work was an all-day board meeting or reading through results of human testing on new products. Trying to decide whether to expand the makeup business or start a new product line, and if so, where. Those were all hard work.

Shoveling out horse shit was nowhere on her list. She liked horses. Horse shit, not so much. She had liked riding when she was younger and had visited Damaris. But she hadn’t been on a horse since. Of course, Damaris had said they’d soon change that. She’d brought a pair of boots with her, but they weren’t cowboy boots. Maybe she’d go into town and check out the Kelly Boots store. She loved footwear and Kelly Boots were famous for a reason.

As for all the other tasks running a horse farm involved, Jaclyn wouldn’t have a clue where to start. Which was just fine with her. She wasn’t interested in the ranch. Only the rancher. Marshall Walker, who she’d had a crush on since she was eighteen years old, and Damaris had taken her down to the corral to watch Marshall putting one of the horses through his paces. She’d thought he looked amazing on the horse’s back. Then he’d dismounted and walked over to meet her.

She’d been dumbstruck. He was everything she’d imagined wanting in a man. He was definitely a man and not a boy, which only made him more desirable in her mind. And he looked at her in exactly the same way he did his sister.

Marshall hadn’t known she was alive. Not until the following summer when she’d kissed him. He’d kissed her back and totally blown her mind. But then he’d let go of her, muttered something about ‘too young’ and had made sure he wasn’t alone with her for the rest of her visit.

She hadn’t spent the intervening years mooning over the man, but she admitted to thinking about him from time to time and wondering if she’d respond the same way now as she had then. Well, she had her answer. Hell, yes.

Marshall, Jaclyn decided, was a damn sight too sure of himself. Wouldn’t it be fun to befuddle him as he’d done to her? Wouldn’t it be even more satisfying to discover just what kind of lover Marshall Walker would be?

There were other men around Whiskey River. Men, she was certain, she wouldn’t be in danger of actually falling for. Or here was a thought. What did she need with a man? Beyond the obvious of course. She’d done without before. In fact, had been doing so ever since her last boyfriend had broken up with her.

Jaclyn hadn’t brought a lot of stuff with her. But then, not a lot would fit in her car. She had her computer, a printer, a suitcase with clothes, another suitcase with cosmetics, some that she usually wore and some experimental, a box with the ingredients for a new lipstick and new eye shadow she was experimenting with, and a file folder box full of what she deemed essential papers. Of course, she had everything on the computer but she liked having a paper copy for backup as well.

She knew she’d have to make a few trips to Dallas to take care of things in person, but most of her business could be done via video conferencing. At least until her condo was ready, but she didn’t know how long that would be. Her COO, Rachel Moore, was in Dallas, handling the day-to-day operations, and she reported to Jaclyn frequently. Besides being her COO, Rachel was one of her best friends and she trusted her implicitly. All in all, Jaclyn thought she should have plenty of time to relax and have fun with Damaris.

Jaclyn was a bit of a workaholic. Okay, make that a lot. Which Damaris knew and was one reason her friend had talked her into coming to Whiskey River. And maybe her friend was right and it was time she took a break and had some fun.

With Marshall? She’d have to see. She knew one thing though. He was entirely too tempting for her peace of mind.

Texas Made is available in the following formats: 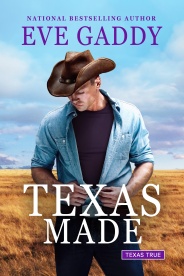 Did you know that Texas Made and many titles are available digitally from Tule's own bookstore? Check it out!