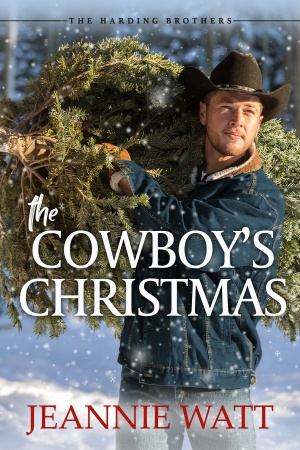 Christmas in Marietta, Montana, is a season of magic and second chances…

Wayward cowboy Quinn Harding doesn’t have a secret—he is a secret. Or he was until his rancher brothers learned of his existence and insisted on meeting up. But Quinn’s reluctant—he’s always been a lone cowboy, enjoying his quiet isolation and taking pride in his ranch work. He’s not a man who’s ever dreamed of a home or family, but when an accident forces him into temporary employment at a small family ranch, he begins to rethink his life’s choices.

Since losing her husband two years ago during the holidays, Savannah Dunn has dodged people and Christmas, preferring the beauty and solitude of her ranch. But now that she’s playing temporary parent to her twin nieces, she desperately needs to rekindle her holiday spirit and sense of fun for the sake of the girls.

Can she and the quiet, gorgeous ranch hand bring the joy of Christmas to the ranch without either of them losing their hearts?

Ice crystals pelleted Quinn Harding’s face as he stepped out of Grey’s Saloon and hunched his shoulders against the wind. The storm bearing down on Marietta, Montana had been predicted, but wasn’t supposed to arrive for another couple hours. Things had changed while he’d been in the dark saloon dealing with the rather overwhelming effects of meeting his half-brothers for the first time. Until today, he’d sincerely believed he was ready for this meeting, even if he hadn’t been looking forward to it; thought he’d dealt with the baggage of growing up without a father and having brothers who didn’t know he existed, though he’d been fully aware of them. He’d been wrong. So wrong.

“Holy…” Ty Harding followed him outside and winced as ice blasted him. “Hurry up,” he called through the door before letting it swing shut.

Quinn’s youngest brother, Austin, opened the door a few seconds later, turning up the collar of his battered Carhartt jacket as he stepped onto the sidewalk. “Damn. How long were we in there?”

At least an hour longer than Quinn had anticipated. Common sense had told him that this first meeting would be a stilted affair as he and his brothers established the in-person connection that Quinn had quite frankly thought would never happen. Since his existence had come as a substantial shock to the men who’d assumed they were Kenny Harding’s only offspring, he’d expected a superficial meeting in which they established some ground rules. Something short and sweet. A “hi and bye” type of thing, after which, duty done, they would return to their separate lives. He’d been shocked when it became apparent that his brothers wanted to get to know him. Where he’d expected suspicion and resentment, or rampant ambivalence, he’d gotten curiosity and…acceptance?

He’d also thought he’d be in more of the power position, having known about his half-brothers since he’d been a kid—hell, he’d even followed their rodeo careers, feeling a tinge of jealousy that they’d had the resources to follow the circuit. He’d figured after thirty-five years, they’d never find out about him, but all that had changed when his dad had the heart attack and made a deathbed confession that rattled the lives of all three of his sons.

His existence had naturally stunned Ty and Austin, yet they’d reached out to him, invited him to their father’s memorial. Quinn passed on the memorial of the man he’d never known but had promised to stop in Marietta on his next trip from his southeast Oregon home to Miles City. And here he was…only things weren’t turning out as anticipated. He’d expected meeting his half-brothers would be awkward, but he hadn’t expected it to be emotional. These were guys he didn’t know. People who had never been part of his life. Yet he felt a connection…or something…with these guys.

By the time the three men reached Quinn’s truck, which was parked half a block away, the upbeat Christmas music playing from the speakers of the western store next door to the saloon was barely audible above the wind, and the Christmas wreaths attached to the city lampposts appeared to be in danger of coming loose from their moorings. Despite the wind, after Quinn unlocked his truck the three of them stood on the nearly empty sidewalk as if uncertain of what to do next. Shouldn’t they just say goodbye?

“Do you have any plans for the holidays?” Ty asked, reaching up to grab the brim of his hat as he spoke.

Quinn’s gut tightened. He now knew he wasn’t going to have a hi and bye relationship with his brothers, but he wasn’t ready to dive into anything either. Especially something that involved a commitment. He had some processing to do, and more than that, boundaries to establish. He wasn’t comfortable with the family thing. For years it had just been his mother and him, moving around the western states from town to town, ranch to ranch. Now that she was gone, it was just him.

“I do,” he said meeting Ty’s gaze, which was disconcertingly like his own. And when he looked at Austin, his youngest brother, it was like seeing himself in a freaking mirror. Yeah. It was going to take a while to get used to being around people who looked like him. Not that he planned to spend a lot of time with his brothers—they lived almost six hundred miles apart—but he could see keeping casual contact.

“Well, you know,” Austin said, glancing past Quinn at the gray wall bearing down on the town, “you could stay with one of us and leave tomorrow. Plenty of room.”

Quinn happened to know from their discussions that day that Austin’s wife was very pregnant, due the end of January, and Ty’s house was being renovated. But he appreciated the offer.

“Thanks, but I’d like to put some miles behind me.”

“Don’t be a stranger?” Austin said and Quinn smiled at his half-brother’s irreverent humor.

“Right.” He scuffed his boot on the sanded sidewalk, and for some reason still didn’t reach for the truck’s door handle. Maybe he simply wasn’t ready to be alone in his own head.

He might have had the advantage of knowing about his brothers for about three decades longer than they’d known about him, but Austin and Ty had had each other. They could discuss the matter after he left, while he would be bouncing things around in his head or talking to his dog as he drove, and conversations with Pepper, his McNab mix, were pretty one-sided.

What did he know about being a brother? Or part of a traditional family, for that matter?

His mom had cut ties with her family before he’d been born, for reasons she never went into, other than telling Quinn he was better off. So even though he had a close network of friends, Quinn’s experience with being part of a family larger than two was nonexistent.

Until now. He’d just experienced an hour of being an acknowledged brother. He had no idea where they went from here, and it appeared that Ty and Austin didn’t either.

“Okay, not pushing,” Ty said, hooking his thumbs in his oiled canvas jacket pockets, “but I’m open to staying in contact, maybe meeting again? Sometime?” He rocked back on his heels. “Up to you.”

Austin pushed his hands deep into his pocket and glanced down at the sidewalk, ducking his head against the wind. He was the easier going of the two, and he seemed to let Ty take the lead. Maybe because he was younger, maybe because he was quieter. Quinn didn’t know yet.

“Yeah,” Quinn said. He’d already given them a rundown of his background. They knew that while they’d had a mom and dad and each other, he’d had a mom who rarely dated and had never come close to giving him a father. Ty and Austin had a classic rural upbringing in a stable family, and he’d moved from community to community as his mom followed the work she knew how to do.

“Not asking for a group hug or anything,” Austin added, glancing up with his easy smile. “Just…you’re our brother. We’d like to stay in touch.”

“Yeah, I’m good with that.” Also a bit threatened because he wasn’t sure what was expected of him. Moments like these tended to bring promises that ultimately came to nothing. It wasn’t that he didn’t want a relationship with his brothers…he just didn’t want to get in over his head before he was ready. And, thankfully, Ty and Austin seemed to get that. In fact, they seemed to get a lot of things about him.

“Okay. Yeah.” Ty stepped back at the same time Quinn did, thus ending this strange family reunion. Pepper, who’d been watching him closely from the driver’s side window got to her feet on the seat and shook, sensing that her dad was about to get into the truck where he belonged. In Pepper’s world, the truck was the best place in the world. She guarded it jealously and if Quinn said anything that sounded remotely like “truck” or “load up,” she was at the ready.

Quinn lifted his chin toward the approaching storm. “I’d better get going.”

Ty opened his mouth, closed it again, then looked at his brother.

“I’ll shoot you a text if I run into trouble,” Quinn said, taking the pressure off Ty. But he drew the line at telling them he got home safely. It wasn’t like they were family family.

His brothers nodded and pushed their hands deeper into their pockets as he opened the truck door and Pepper gave him a sharp poke with her nose, as if she could ascertain his well-being by conducting a quick compression test.

He ruffled the hair on her neck in a quick affectionate movement, then got into the driver’s seat and lifted a hand to his brothers after starting the truck. They returned the gesture before turning together and heading in the opposite direction down the sidewalk toward their own vehicles.

Quinn released a breath that came out longer and harder than expected.

This meeting had been a helluva lot more difficult than he’d anticipated. So, the big question, now that they’d parted ways, was did he really want to do it again any time soon?

Because the same nagging thought kept chasing after him. What did he know about being part of a family?

The Cowboy’s Christmas is available in the following formats: 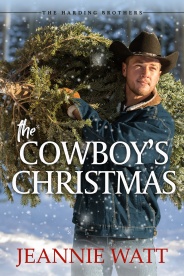 Did you know that The Cowboy’s Christmas and many titles are available digitally from Tule's own bookstore? Check it out!