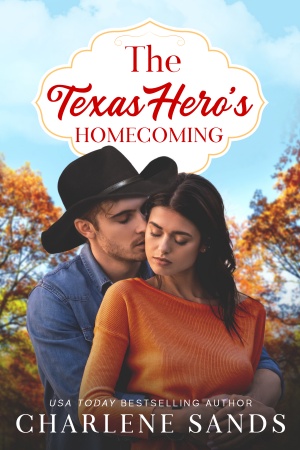 His final mission may be the most dangerous of all…to her heart.

Autumn Messina has finally put herself first and achieved her dream of becoming a teacher. She’s only sorry it’s come at the expense of having to sell the once thriving Messina Farm. Autumn loves her father and the farm, but she can’t do it all, and her brother has no plans to move back home. And then her brother’s best friend saunters back into her life even more handsome than she remembers and arrogantly full of plans and answers to questions she no longer wants to ask.

After exiting his special forces unit to return home to Last Stand, Sam Russell feels duty bound to help his best friend’s struggling family farm. He’s not expecting such fierce resistance in the form of a still-angry Autumn, who’s become even more beautiful and tempting in his years away.

Autumn doesn’t want his help, but Sam has never given up so easily. And what starts off as just doing his duty quickly becomes something much more personal.

Sam Russell was on a mission. And it just might be riskier than the Ranger missions he’d carried out in Afghanistan. His military instincts still with him, he wasn’t too sure of this outcome, but he’d damn well give it his best shot. There’d be a blockade of course, a force to be reckoned with. Didn’t all things worthwhile have to be hard won?

He got out of his truck, the worn red paint job bleached from Last Stand weather over the years, would never be the same. Neither would he, but first things first. Squinting, he stared across the Texas landscape and steadied his breath. Acres of Messina farmland was going to ruin, wasting away from unintended neglect. Man, he’d never have believed it. The once prosperous Messina Farms, where he’d worked weekends as a teen, was only a shell of what it had once been. His heart slammed against his chest. Sergeant Joe Messina, the man who’d saved his life, had no clue how bad things had gotten. Now that Sam was discharged, he owed this debt to his best friend, to check out the Messina family farm, make sure it was running smoothly.

Clearly it was not.

Sam ran a hand down his face, the memory of Joe’s bravery always with him. The unexpected barrage of bullets, Joe shoving him to the ground, nearly taking a bullet himself to save his life. Sam would’ve been hit for sure, if it hadn’t been for Joe’s quick reactions. They’d been on a secret mission, surrounded by a band of misfit terrorists, the fire fight ugly, yet their unit had managed to hold them off without casualties.

It had been a whew-that-was-close, stone-cold kind of feeling that really rocked a man to his core. Made him sit up and take notice. He was no longer that young man eager to prove his worth as an Army Ranger. His service had been important to him, but after ten years in the army, seven of those years a Ranger, for him, it was time to come home. Settle down. Figure out his future. Before he could do that, he owed Joe this. Hell, he owed Joe much more and he’d do whatever necessary to fix the Messina family farm.

A flash of ink-colored hair caught his eye, the deep rich strands catching the late afternoon light. He sighed. His human blockade came into view, all five-foot-five inches of her and he dug in his heels.

She walked into the barn, out of sight.

He’d left her as a kid of seventeen. And now ten years later, the girl he’d once known was a woman. And according to Joe, a head-strong, pain-in-the-ass female with brains and beauty to spare.

Sam squeezed his eyes shut. Maybe he hadn’t been fair to Autumn, all those years ago, but now he was back, and it wasn’t like he wanted to start anything with her. No, he just wanted to help them out of a jam. He crossed the yard and stepped into the barn, the crunch of straw under his boots.

“Who’s there?” Autumn swiveled around, her eyes narrowing, pitchfork leveled and ready to pounce.

She faltered back a step, blinking her eyes. “S-Sam?”

Her Mexican-Irish heritage awarded her olive skin in warm rich tones, a heart-shaped mouth, and striking meadow-green eyes. She was beautiful, even aiming a pitchfork at him.

“What are you doing here?”

“Put the pitchfork down and I’ll tell you. Man, are you always this jumpy?”

She scowled; the face she made not pretty at all. “Everyone’s gone for the day. I didn’t expect an unannounced visitor.” She sighed and leaned against the pitchfork, refusing to give it up. She’d probably like to poke him with it. “I heard you were back in town.”

“Got back yesterday. How’d you know?”

“Last Stand isn’t exactly a metropolis. Word gets around.”

He nodded. He was sorta sucker-punched seeing her again, his emotions all tangled up. Which was strange, because he’d recently been dumped by the woman he’d intended to marry. He’d left the military with plans of settling down. Apparently, Hilary hadn’t been ready, taking up with her ex-boyfriend, rather than starting a life with Sam. He’d been thrown for a loop and hadn’t seen it coming. So, no matter how pretty Autumn was, she would never be on his radar. After his heartbreak with Hilary, he wasn’t looking for any kind of involvement. Especially with Joe’s little sis. No sir. He’d been stung once and it still smarted like the dickens.

“Well, I’m here in the flesh. I came to ch—To visit. How’s your father doing?”

“Papa’s okay.” She paused for a second, her eyes meeting his. “He’s probably too tired for visitors right now. Maybe you should come back another day. Or better yet, I’ll tell him you came by and we’ll call it even.”

She gave him the point of her chin.

He studied her. She wasn’t happy to see him, that was for sure. They’d always been close, because of his friendship with Joe. Joe teased that Autumn hero-worshipped Sam, being five years her senior. And damn, Sam should’ve known better than to get involved with her back then. They’d had one night under the stars, and they’d kissed and kissed. Her passion surprised him, the fire in her an ego boost. But he’d sensed it was more than innocent kissing with her. That maybe her hero-worship had reached another level. He shouldn’t have given in to temptation. Joe’s younger sister was off-limits and as soon as his addled brain had remembered that, he’d put a stop to it. She’d been a starry-eyed teen and his rejection that night hurt her. It couldn’t be helped. And now, it seemed she still held a grudge.

“So, what happened here, Autumn? I don’t think Joe knows how bad it is.”

“That’d be Papa’s doing. He didn’t want Joe to worry. He’s proud of my brother and his service to the country.”

She set the pitchfork against the wall and leaned back, crossing her arms over her middle. She looked every bit the farm girl in jeans and a red plaid shirt.

“And so, your father decided to keep it to himself?”

“Something like that. Papa has a lot of pride. He didn’t want Joe coming home, on account of the farm. He didn’t want him to give up on his career. Being a Ranger is what Joe wants, what Papa thinks he was meant to do.”

“And what about you?”

“Me? I’ve been running the farm. As you can see, I’m doing a bang-up job, but it doesn’t matter anymore. We can’t sustain it. It’s been a trial, with drought and disease and lack of funds to replant.”

“Still, I think Joe would want to know about this.”

“Joe took off and left me here. You two joined up and off you went.”

“Joe left a prosperous farm in your father’s capable hands. As far as he knows, things are going okay. He always praised you for working alongside your father.”

“I didn’t have much of a choice. My dreams didn’t much matter.”

“You were seventeen. You didn’t have dreams back then.”

Her eyes pierced him. Regret and injury reflected there. “Maybe I did. Maybe I kept what I wanted to myself.”

Her words sliced straight through him. “Autumn, I was always going to join up. You knew that.”

“Somehow, you made me forget that, right here in this barn.” She glanced at the hayloft where brilliant evening stars had twinkled through the four-pane window. The place where he almost made a big mistake with her.

She sighed, her shoulders rising and falling as if she carried the weight of the world. “It doesn’t matter now. It took me years to earn my online bachelor’s degree. I’m teaching now at Honeysuckle Elementary. This is my first semester. I’m making a living, doing something I love. Something I’ve always dreamed of doing. Papa has agreed to sell the place and then we’ll move into town.”

“And Joe doesn’t know any of this?”

“I’ll tell my son, soon enough.” The aged raspy voice came from behind. Sam turned to find Manuel Messina, leaning heavily against the barn wall, braced by a cane.

“Hello, Manny.” Sam strode over to him and put out his hand. “Good to see you, sir.”

Manuel took his hand then pulled him in for a surprise hug. He didn’t think the older man was strong enough, but he held firm and patted Sam on the back. “Ah… good to see you, son. Very good.”

“Papa, there’s a chill in the air. You should go back inside.”

“I’m not so feeble that I can’t make those decisions for myself.”

Autumn pursed her lips, and it took what looked like all her sanity, to keep them sealed. But it didn’t stop her from giving Sam a big fat pout.

He flashed her a wide grin and turned back to her father.

“I’m fine. Got here yesterday. I’m staying in town with my sister, Nicole, right now. I need to be here for her wedding. I guess I’m her best man of honor. She’ll be getting hitched in a few weeks.”

“Ah, your little sis is marrying. That is very nice. She found a good man?”

Manny gave his daughter a looking over. “Seems to me there’s more good men in Last Stand, but Autumn hasn’t found a one of them yet.”

“Papa!” Autumn rolled her eyes and marched past both of them, right out of the barn. “Honestly,” she muttered.

“Set another place for dinner, daughter.”

She stopped in mid-stride and swiveled around. “What?”

“You haven’t had supper yet, have you, son?” Manny asked.

“Well, Autumn’s a fine cook and we’ve got enough beef tamales to feed all of Last Stand. You’ll join us?”

Autumn’s fists landed on her hips. The fire in her eyes something to see, even if it was aimed at him. “Papa, he’s probably got other plans.”

“Nope, don’t have any other plans. Thank you very much for the invitation.” He tipped his hat.

Autumn heaved a sigh and spun around.

She wasn’t having a good day. And he was truly sorry about that, but he had a mission to accomplish here. He had to find out more about the farm. He had to see if there was a way to save three generations of hard work and toil, from going under.

Whether pretty, fiery, Autumn Messina wanted him here or not.

The Texas Hero’s Homecoming is currently available in digital format only: 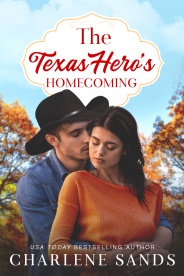 Did you know that The Texas Hero’s Homecoming and many titles are available digitally from Tule's own bookstore? Check it out!