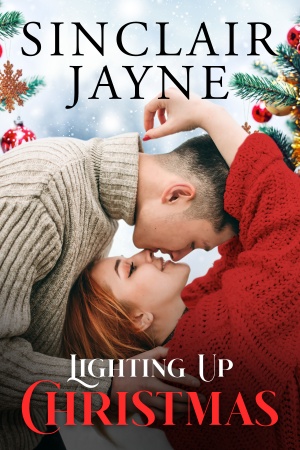 Spending her first holiday without her large, loud family allows electrician Riley Flanagan more time to find commercial clients for Flanagan & Sons, the third-generation family business she’s taking over. But when the town council nixes her Christmas-themed light garden, she approaches new-to-town entrepreneur and vintner Zhang Shi, hoping to land him and his not yet open winery as a client. He’s not interested, but Riley never gives up that easily.

Zhang Shi bought a mountainside property and planted a vineyard to escape his corporate life in the Bay Area and reconnect with his nature-loving grandfather. Fiercely independent and private, Zhang reluctantly calls Riley to rig an emergency electrical fix shortly before he entertains some colleagues. Zhang’s determined to avoid the town’s Christmas celebrations, but Riley is hard to refuse and impossible to ignore. And as she pulls him closer into the tight-knit community, he’s no longer sure he wants to.

“The answer is no, obviously.” The mayor clearly took pleasure in uttering his favorite word and the cutting four syllables following it.

“The answer should be yes,” Riley Flanagan countered with her megawatt smile. “The designs are innovative. The LED lights will save energy and last far longer and save the city money. And by creating a Garden of Lights in River Bend Park, it will not only light up the first annual Christmas Market, but it will bring more people, more families downtown at night for the holiday celebrations.”

The mayor looked deeply unimpressed. The three city council members and five city planners wore expressions in various shades from patience to curiosity, and all of them, except the mayor, were listening, so Riley ramped up her pitch.

“More people means more money for shop and restaurant owners, and that means more money for city coffers. The Christmas Garden of Lights can be themed each year. We can hold a contest to involve citizens. It can become a town tradition and bring more tourists into our historic downtown instead of everyone heading out toward the interstate and Medford for the big box stores or into Ashland or Jacksonville for the holiday and celebration shopping and dining.”

Why didn’t he get this? Bear Creek, with some strategy and capital investment, could become a thriving tourist destination instead of a “let’s keep driving—Ashland’s only twenty more miles” town. True, the population was growing—young families drawn in by the natural beauty of surrounding Oregon’s Rogue Valley.

“Bear Creek, with its river and proximity to Table Rock’s hiking trails and Mt. Ashland, wineries, and historic downtown, could become a destination town. We just need to distinguish ourselves, and the Christmas Market is one event we hope to have annually, but it’s just one weekend a year. The Christmas garden would run all December, and families and couples could visit and walk through the garden at night and then walk down River Street and do some shopping and eat out. It’s a no-brainer.”

Riley sucked in a quick breath. Oops. She shouldn’t have said that last word. The childish singsong “No Brain Bane” danced in her head while Mayor Jeffrey Bane continued to regard her as if she were a widening pool of spilled coffee on his rather ornate desk. That was the unfortunate side effect of growing up in a small town and not leaving. Everyone remembered your challenges from childhood.

Jeffrey Bane might be a politician—slick and handsome enough to make women do a double take on the street, and the oldest son of a wealthy family with pioneer roots that owned the largest chunk of dirt in the region—but he’d struggled to learn to read in elementary school.

Not that she’d ever taunted him. She’d been assigned to help him.

But plenty of others had. She’d been sent to the principal’s office twice for slugging a few bullies in her day, which was how her three older brothers had problem solved. Riley had soon learned her words made better weapons and “tools of protection,” as her mother had said during the first serious sit-down talk Riley could remember from first grade.

“Let me get this straight, Riley.” No Ms. Flanagan for her, though the two earlier presenters at the city council work meeting had been referred to deferentially by their surnames. “You are proposing that Flanagan & Sons Electric receive a city contract to decorate the park with some ode to our town’s agricultural past while we are knee-deep in a recession following the brutal fires in Southern Oregon this past summer where we lost two of our hometown heroes.”

Her heart pinched. She’d known both of the two smoke jumpers who’d been lost. One, Enrique Reyes, had been her best friend’s fiancé.

“Your father and uncle are finally taking ‘a vacation of a lifetime,’” his air quotes matched his snitty tone, “and will be gone all of December, January, and February—essentially they have become snowbirds, leaving you as the only Flanagan standing.”

That was another problem with towns hovering below ten thousand residents. Everyone knew your family business, including that her three brothers and two cousins had wanted no part of it or in staying local.

“I still have a crew,” Riley reminded Jeffrey Bane, keeping her voice low, pleasant, and—the biggest achievement of all—devoid of sarcasm, but she could feel her blood heat.

She stuffed down the emotions. She had to keep it together or she’d turn bright red. Was “Lobster Mobster Flanagan” playing in his head right now? Not that her oldest uncle, who hadn’t been a part of the three-generational business, had been a mobster, exactly.

“And students from the community college.” Pride tinged her voice. She taught a class there each semester and took on apprentices every year.

“But no dear old dad or uncle,” Jeff said.

Her dad and uncle weren’t retiring completely, but they wanted to cut back. Riley wanted to expand the business to include more commercial accounts and add landscape lighting design. And when she let herself dream even bigger, she toyed with the idea of having a small storefront where she could sell her chandeliers and sconces she created out of reclaimed materials, specialty bulbs, timers. The shop would have an office in the back where she could meet with clients and discuss their electrical, lighting, and landscape lighting design needs and desires. She imagined…

“And still a titanium-hard no.” The mayor leaned back in his huge black leather swivel chair, crossed his arms, and kicked up his feet in his expensive-looking leather dress shoes with no scuff marks, soles up on his desk. His smile was a deliberate taunt, and he waved his fingers toward the door like he wore a crown.

She squared her shoulders and forced herself to face him calmly, keeping her pleasant, professional expression in place like she was still on the small stage of her high school musicals and plays.

“I have shown the council a PowerPoint presentation of the Bear Creek Christmas Light Garden. I’ve included the costs to the town and the estimates of the financial benefits to local shop owners and Christmas market venders from the increased tourist foot traffic by analyzing the economics from other light displays in other northwest communities. I’ve also broken down the energy savings over a ten-year period if the town switches to the more advanced lighting for the Christmas holiday displays on River Road and Main Street. I’ve included a steep discount since it would be Flanagan & Sons’s first year designing the lights for the town and creating the Christmas Light Garden in River Bend Park.”

She would essentially be working at cost with no payment for herself.

But so worth it for the marketing opportunities. People would come from all over—Medford and Grant’s Pass—and those far larger towns would serve up a lot of potential customers for her budding landscape lighting design.

Riley Flanagan spent a lot of time planning for the future.

“A little late for this presentation”—Jeff uncrossed his arms to make a slashing gesture with his hands—“with Thanksgiving tomorrow and the Christmas season kicking off on Friday with the tree lighting ceremony and Santa parade and the Christmas whatever whatever.”

Shouldn’t the mayor be all about promoting the town, not knocking it backward?

“Christmas Market,” Riley said softly. “And I did sign up for a time to present months ago. My time slot kept getting canceled at the last minute.” She could feel her eyes laser into him.

He’d never liked her. After she’d spent hours and hours with him in the reading nook in elementary school, he’d gone out of his way to torment her in middle school and then ignore her in high school. Her mom had said it was pride. Riley had just been trying to be nice. Helpful. She hadn’t expected thanks for her childhood good deed, but she did think her professional future shouldn’t be undermined either.

The other council members stirred; confusion crossed their features.

“It is a good plan, Riley,” Jennifer Nevens spoke up. “And you’ve given us a lot to think about. It’s just the timeline is so tight, and our budgets are set in July.”

“Which is when I started trying to get on the agenda,” Riley said firmly. Mr. Butter Won’t Melt in My Mouth Mayor hadn’t treated her as fairly as any other constituent. “My costs are below what you are currently planning to spend.”

She knew because she’d checked. Town budgets were public information. “And the timeline is tight but manageable,” she said confidently. She had already created, in her opinion, some beautiful designs focusing on nature over the past couple of years when she’d started exploring the idea, so she’d have a base to start. Who needed sleep? Besides, with her family away—she ignored the pinch of dread—there would be no one to caution her to slow down, relax, put her ambition on simmer, and her aunt’s favorite: find a man.

Jeff’s expression soured as if he’d bitten into an unripe, bitter grape from one of his family’s hundreds of acres of vineyards—only one of their enterprises.

“I’ve emailed the presentation and figures to all of you,” Riley said. “Thank you for your consideration.”

She resisted looking at Jeff and adding a “not” at the end. She closed her laptop, caught up her sturdy backpack, and slid her computer into its case as she swanned out of the general meeting room at city hall. She wasn’t going to get the project despite giving them a mind-blowing win-win bid.

Jeff Bane was too petty and still No Brain Bane. He thought of himself, not the town that he had theoretically planned to lead.

The town council and city planners, still steeped in tradition and caution, were too enthralled by Jeff’s five generations of wealth and power in their small corner of the world to consider thinking outside a Bane’s brain.

Outside, Riley let loose a growl. He’d won this round. But she wasn’t giving up.

Lighting Up Christmas is available in the following formats: 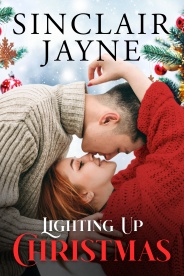 Did you know that Lighting Up Christmas and many titles are available digitally from Tule's own bookstore? Check it out!