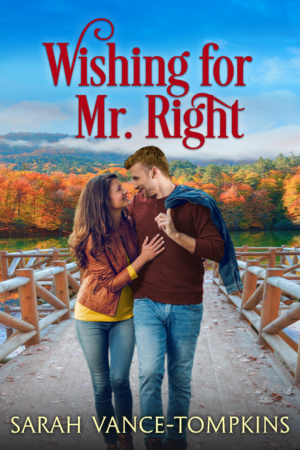 When you wish upon a star, sometimes your dreams come true…

When her high-rise career tanks, urbanite Dacey Adair returns to her northern Michigan hometown of Christmas Tree Cove in need of a reset. Early one morning while prepping for her seasonal job on a fishing charter, Dacey makes a half-hearted wish on the harvest moon to bring her the man of her dreams.

A few blinks later, she finds a naked man clinging to her boat.

Local heartthrob Luke La Fontaine has led a charmed life. He’s recently become famous for his TikTok videos demonstrating the art of cheesemaking while surrounded by adorable farm animals. His handmade, small batch cheese is much sought-after by foodies. But what he really needs is a business strategy.

It’s the perfect recipe to set Dacey back on the path to success, but as she and Luke spend more time together, her goals blur. Is this an off-season fling or will their connection age to perfection?

Luke La Fontaine made a wish before he opened his eyes—wishing he was home in his own bed—only too aware his wish would never come true.

A headache throbbed at his temples. Cursing under his breath, he forced one eye open, searching through the filter of his eyelashes for any clues to his surroundings.

Anemic light leaked through the slats of the expensive plantation shutters. Nothing was familiar, but two things were immediately apparent.

One: He’d had a dish of cat food right before bed and he’d eaten it with a duck liver pate. There were no other explanations for the vile taste in his mouth.

Two: His head had recently been split open with an axe, and it was still embedded in his skull. The pain between his eyes was excruciating, and at any moment his head was going to spontaneously explode.

Wincing, he leaned up on his elbows and attempted to focus on his surroundings. He was sprawled across a large sectional sofa, covered with a plaid wool blanket in a room the size of an airplane hangar.

He didn’t recognize any of the luxurious furnishings that filled the room in shades of tan, buff, and cream. Or the people in the silver-framed photos scattered across the nearby antique grand piano.

On a large-screen television dominating the entire wall on the other side of the room, Netflix demanded he make a choice whether or not to continue watching the fifth episode of a true-crime documentary.

Netflix would have to wait for a response.

Sitting up, he discovered the contents of his stomach were extremely fragile. Bile was rising up in his throat, threatening to make an appearance. He let his head fall back into the pillows on the sofa. He grimaced as he landed on the soft surface as if he’d hit his head against bricks.

He took a deep breath, filling his lungs with the crisp tang of lake air. Seagulls cried nearby. It was enough for him to recall his joyous laughter as he negotiated the front steps of the million-dollar beach house late last night.

I need to go home.

He didn’t belong here. He lived on the other side of the peninsula, but it might as well have been on the dark side of the moon from here. His farm on Harvest Moon Bay wasn’t on the main drag into Traverse City. It was on a country road frequented only by family members or people who came up from the city to go on fall-color tours in autumn.

He’d always enjoyed an active social life, but lately he’d had too much unwanted solitude and his current predicament was the result. To his credit, this was the first time he’d gone missing since Emma came to live on the farm.

His favorite goat was pregnant and due to deliver any day. Most nights, he went out to the barn to make sure she was warm and comfortable before bed. They’d have a brief chat—which was a one-sided conversation. But last night he’d gone out on a date and Emma was probably still waiting for her first meal of the day.

After a moment of panic, he was comforted by the fact that Sophie would be over at first light and start rounding up the cows for milking. She and Alizeé wouldn’t worry where he was. They’d toss shade in his direction regarding his absence, but he deserved it. This wasn’t the first time he’d been MIA on a Sunday morning. Probably wouldn’t be the last.

Luke tossed back the blanket, only to discover he wasn’t wearing pants. He stumbled to his feet and did a perimeter search of the room. Nothing resembling clothing that might belong to him was in sight.

He tiptoed down a hallway toward a darkened bedroom. A woman with bottle-blond hair was asleep on the pillow. Nothing about her was familiar until she rolled over, refreshing Luke’s memory as her hair spread across her pillow. Her face was creased by the pillowcase, and her eye makeup had melted down her cheeks.

“Just call me Janet,” she’d said with a wink sometime during last night. Luke wasn’t sure why he’d agreed to go home with her.

You’d follow a serial killer home on a Saturday night after a couple of beers.

He exhaled a heavy sigh. He wasn’t going to do this anymore. But his current situation made him painfully aware that bad habits were hard to break.

In the near distance, a car door slammed.

Janet came alive in full motion. In high school, he’d had a dog who behaved the same way. The dog would be all comfy, napping on the sofa, and as soon as his mom’s car pulled into the driveway, the dog sprang to life.

“Get out!” Janet hissed. She pushed hard against Luke’s chest, shoving him out of the bedroom.

“What the hell is going on?”

“Theoretically, yes,” she said, her lips twisted into a sneer. She made a windmill gesture with her arms, swinging them around to point out the accommodations. “He’s the reason I can afford an Airbnb on the beach.”

“Didn’t you mention a trust fund?” he asked.

Janet put her hands on her hips. “I wish.”

She nodded. “You emptied an entire bottle of red wine on them trying to uncork it last night.”

Of course he did. He had that kind of luck. Luke glanced at the wide, curving staircase, calculating the risk of going upstairs against the distance of the footsteps now approaching the front door.

Luke followed her into the master bedroom. She opened the blinds of the French doors. Luke was reminded of the hangover he was nursing as the dim morning light blinded him.

He put up his hands. “But my iPhone and my wallet are in my pants—”

She shoved him through the open French doors in the master bedroom, slamming them shut behind him. When he spun around to protest, she closed the blinds in his face.

“Hey,” he shout-whispered into the crack of the door. “I need my pants!”

The French door opened. His sharp reflexes were the only thing that prevented him from being bashed right in the nose by his own work boots.

“Stop talking,” Janet snarled, pressing one finger to her lips. “Be quiet.”

Luke stumbled down the steps of the porch, self-conscious of the fact that he was in his underwear. He hunkered down next to the porch and regretted every decision he’d made last night.

It wasn’t the first time. It wouldn’t be the last. He groaned.

He waited and waited, but his pants never appeared. He gingerly made his way down a narrow path through tall pine trees leading down to a wide strip of white sand where gentle waves of Lake Michigan unfurled in a regular rhythm.

The wide, sandy beaches that went for miles and miles in either direction made Christmas Tree Cove a tourist destination throughout the summer. From June through August, day-trippers took over, filling every inch of sand with a patchwork quilt of towels, picnic baskets, and beach chairs.

Labor Day had come and gone, marking summer’s unofficial end, but the weather had remained warm and sunny, although the crisp night air hinted at winter’s approach.

Most days, Luke wouldn’t be able to step onto the Christmas Tree Cove beach without running into a friend or acquaintance, but the sun wasn’t up yet and the beach was deserted.

You should thank your lucky stars no one is here.

A line of charter fishing boats motored across the waves in a steady stream from the busy harbor. His white boxer briefs would not be mistaken for a pair of swim trunks in the bright light of day. He needed an escape plan, but Luke’s gaze was drawn to the horizon.

The early morning sky was still inky blue, and a few stars twinkled near the crescent-shaped harvest moon. He stared for a long moment at the massive harvest moon, then closed his eyes and made a wish. It had nothing to do with his current predicament and was more than likely to go unfulfilled.

Through the trees came snatches of conversation accompanied by the yips of two playful golden retrievers. Two early risers headed down to the beach on the path he had claimed as his own. He panicked when the yellow dogs crashed through the foliage to greet him.

Neither the dogs nor their owners aware of his dicey predicament.

He broke into a lopsided run toward the water. A frosty breeze was blowing out of the west. No doubt the water temperature was no longer in the range that made it refreshing on a hot summer afternoon. He howled when a few frigid droplets splashed against his legs. By the time he’d waded in up to his knees he was quaking with cold. Not that it mattered. At all. Two more steps. Then with all the grit he had left he dove under the shallow waves.

Wishing for Mr. Right is available in the following formats: 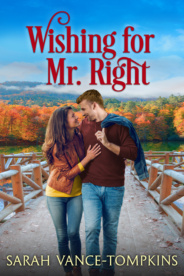 Did you know that Wishing for Mr. Right and many titles are available digitally from Tule's own bookstore? Check it out!