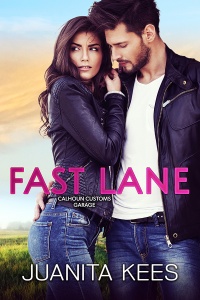 What is Trinity’s all-time dream car?
She owns two of her much-loved dream cars – a 1975 Dodge Dart and a 1970 Plymouth Road Runner. Her dad and Chase have just finished restoring the Plymouth when she arrives back in town.

Now wasn’t the time to lose her nerve. Racing was like riding a horse. When a girl fell off, she got right back on again. “Whose car will I be driving?”

“The old Road Runner? Is that thing still alive?” Her first race car. A 1970 Plymouth coupe in orange with a black racing stripe up the hood. Three hundred and thirty-five horses and a torque of four twenty-five. Dynamite on wheels.

“Alive, tuned, and ready to race.” Marty grinned. “Car’s loaded on the trailer. Be there at six. Your gear’s in the car. I won’t let you race without it.” 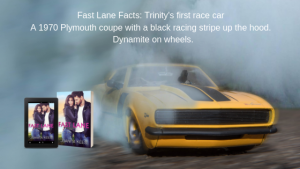 How did Reece find his calling as a paramedic/volunteer firefighter?
From the age of ten, he’d known he wanted to be a paramedic, a first responder, a lifesaver. He grew up in foster care with his friends, Tommy, Harper and Carmen. His foster father was a paramedic and a solid role model. 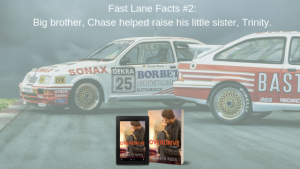 Does Fast Lane feature an appearance from Chase Calhoun from Overdrive?
Yes 😊. The Calhoun Customs Garage series is all about the importance of family and Trinity is Chase’s baby sister. He helped raise her when their mom died after giving birth to her. The siblings affectionately call him ‘Mother’. He doesn’t mind. He’s cool with that. 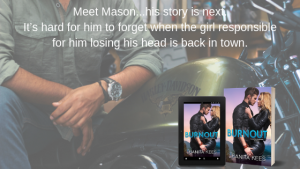 What’s next for the Calhouns?
Mason’s story is up next in Burnout. He’s been a crucial part to over-arching plot in this series, so make sure you read Overdrive and Fast Lane first for a sneak peek at his character. He’s moody, tough, and riddled with guilt over the accident that caused his youngest brother’s death. And now the girl who’s haunted his memories is back in town and on his mind. 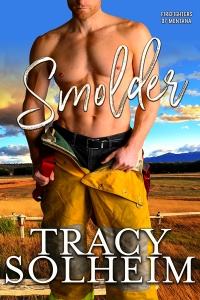 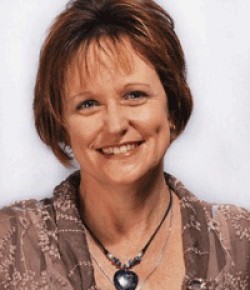 Juanita graduated from the Australian College QED, Bondi with a diploma in Proofreading, Editing and Publishing, and achieved her dream of becoming a published author in 2012 with the release of her debut romantic suspense, Fly Away Peta (recently re-released as Under Shadow of Doubt).

Under the Hood followed in 2013 as one of the first releases from Harlequin’s digital pioneer, Escape Publishing.

In 2014 Juanita was nominated for the Lynn Wilding (Romance Writers of Australia) Volunteer Award, and was a finalist in the Romance Writers Australia Romantic Book of the Year and the Australian Romance Readers Awards in 2014 and 2016.  Her small-town romances have made the Amazon bestseller and top 100 lists. Juanita writes mostly contemporary and rural romantic suspense but also likes to dabble in the ponds of Paranormal with Greek gods brought to life in the 21st century.

She escapes the real world to write stories starring spirited heroines who give the hero a run for his money before giving in.  When she’s not writing, Juanita is mother to three boys and a Daschund named Sam, and has a passion for fast cars and country living.