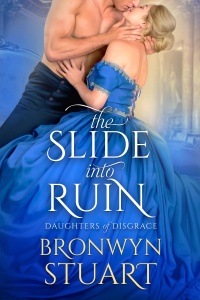 Gosh book 2 of my Daughters of Disgrace series has come around quick! It seems like only yesterday I was answering questions about The Road to Ruin and now here we are with The Slide into Ruin right on the horizon. Some of you who read that last interview I gave for book 1 might be a little confused when they pick up book 2 because all I seem to bang on about these days are fierce heroines looking after themselves like it’s no one’s business! Eliza is a little different than Daniella was. I absolutely hate it when the heroine in a romance novel is a victim but sometimes the circumstances behind the why’s are more important than the their start in the book. A victim of circumstance is a different beast altogether.

You see, Eliza’s father, the Duke of Penfold, has abandoned his children to their fate. He gambled away their legacy on bad decisions and terrible advice and now owes a very large sum of money to some very awful fellows. Intending to sell Eliza’s younger sister to pay the debt, Eliza forges a marriage bargain for herself to save her sister and hold onto the title for her brother who is nearly of age. That’s who Eliza is, she is the protector of her siblings but what happens when Eliza herself also needs protecting in this world of powerful men and their games? Enter Darius! 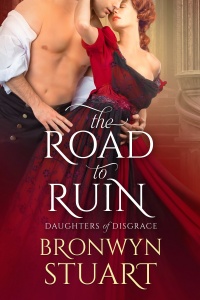 Darius is an ex-pirate (we met him in book 1) who has turned his sights to legitimacy in business but is illegitimate in truth and England knows it. He also now owns the debt Eliza’s father and his no-good friends were to repay which means he essentially now owns Eliza. The only way to keep her and her siblings safe is to go through with the marriage and collect the inheritance bestowed on her by her late mother so he can repair his storm-battered ship and sail everyone back to Boston and out of harm’s way.

But don’t think Eliza will go to her fate easily! She is as fierce as her strength will allow her to be since she’s been going without for the sake of her family. She holds an Earl and his heir at gunpoint. She enters a house full of pirates with her young and impressionable siblings. She forged a marriage contract not even fully knowing who she will have to marry or even if he would come to collect! She takes on an Earl, a magistrate, a notorious villain and a new husband. Eliza’s quiet strength and her determination is what makes her a notable heroine in my eyes, and hopefully in yours too…

Publishers Weekly called The Slide into Ruin ‘pitch perfect’ in their starred review and readers are loving Darius and Eliza, and their bumpy journey to reach their happily ever after.

And stay tuned for book 3 coming soon! Rose Clairmont is the daughter of a careless earl but is also a smuggler who needs no help from anyone until a villain begins to harass her cargo off the coast of Dover. Who better to appeal for help than Anthony Germaine, the son of a notorious pirate, brother to the infamous Daniella? Her plans hit a snag when she discovers Anthony upholds the law and has no plans to help her break it!

Tell me your favourite lead female (in books or screen) for a chance to win one of two ebooks of The Slide into Ruin! Winners will be drawn at random at the end of the week.  (GIVEAWAY CLOSED) 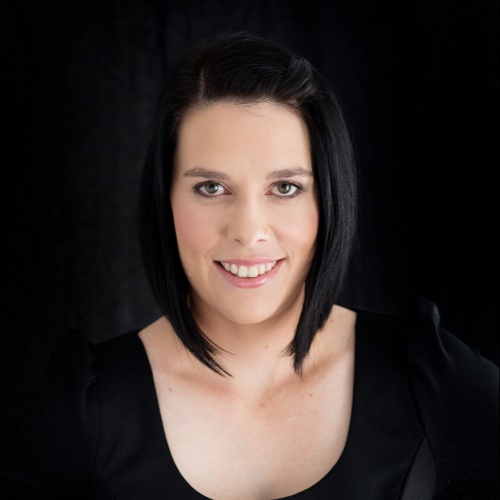 Bronwyn Stuart is a multi-published, award-winning author of both contemporary and historical romantic fiction. Her latest Regency series, Daughters of Disgrace, will be released July 2020 by Tule Publishing. She and her shoe collection share a house in the Adelaide Hills with her husband, kids, dogs and cat. She’s a sucker for a love story and a bad boy. You can find out more at www.bronwynstuart.com