Caught Up in You

After attending her baby sister’s destination wedding, Shelby Worthington decides she’s ready to do some husband hunting of her own. The only problem? She’s still insanely attracted to Declan Enright, her high school and college crush. He’s now a wildly successful painter who’s temporarily back in Magnolia Bay, but Declan should be Shelby’s last choice for possible husband material. He didn’t earn the reputation of runaway groom for nothing…

Declan has worked hard to make his mark on the New York art scene and has succeeded at everything he’s ever done…except love. But Declan has come back to the Bay to change that and care for his dying father, even if he’s still never forgiven Declan for leaving the family business. Shelby is determined to steer clear, but while her lips keep saying no, her heart is pounding out yes each time she and Declan are together. While she can’t deny her attraction, Shelby’s convinced that Declan’s track record means he will break her heart. Or has Declan changed for good, and made love worth the risk?

Shelby Worthington took the long way home from her sister’s destination wedding in Bermuda. Instead of catching a flight back to Charleston and then making the thirty-minute drive to Magnolia Bay, she flew into Miami, splurged on a cute little red convertible rental and drove up the coast. She took A1-A, the old snow bird route, stopping in little beach towns along the way whenever she wanted. The trip was an homage to her late parents, to her mom who loved to go exploring, and to her retired military dad who hated stopping even for a potty break, much less to explore Americana.

As much as she still missed her parents, she was surprised the wedding hadn’t been as bad as she’d expected. Because it was so far from South Carolina, there were only a handful of family and friends at the resort to watch Shelby’s baby sister, Chelsea, marry her longtime boyfriend, Matt Baker.

To be honest, there probably wouldn’t have ever been a wedding if Matt’s mom wasn’t sick. Neither Chelsea nor Matt believed they needed a piece of paper to prove their commitment to each other. They thought getting married was silly after living together for six years, but Matt’s mom, Carol, had stage four ovarian cancer, and it was important to her to see the happy couple married. Carol had wanted them to have a proper Catholic wedding, but she’d settled for seeing her son barefoot and married on the pink sandy Bermuda beach.

With twenty-five guests in attendance, Shelby, being the odd woman out, was only asked forty-seven times over the three day weekend—So, when are you getting married?

Married? At thirty-three, Shelby had always been a bit of a serial dater. There hadn’t been anyone special since college, and she was quite happy, thank you very much. She loved men and preferred her life to Chelsea’s. Her baby sister had met Matt her freshman year of college and knew he was the one.

Shelby spotted a sign that claimed The Best Breakfast in the Sunshine State and eased the car into the crowded parking lot. The place was packed inside, with a handful of customers waiting on benches on the front porch. She gave those folks her best hey y’all smile and put her name on the waiting list. A thirty-minute wait would be enough time to check in with her friends back home who were dying to hear about the wedding.

She scrolled down her contacts until she found Hannah’s number and hit the call button. Shelby owned a cute little shop on Main Street in Magnolia Bay, called Slick Chicks, and her best friend since ninth grade, Hannah Austin, owned Turquoise, an upscale boutique and friendly competitor of Shelby’s store.

“Shelby!” The squeal was ear piercing.

“Hi, Hannah. I may never hear anything again, but it was good to hear your voice. I’ve missed you and the rest of the Chicks something fierce.”

Since she was fourteen, Shelby had been best friends with her gal pals, the Six Chicks, which of course included Hannah. They loved each other to bits and stuck together, even though they’d recently taken Darcy into their pack and there were seven now. Somehow, Seven Chicks just didn’t have the same ring to it.

“Tell me all about the wedding,” Hannah said.

“Bella’s fine. She’s chased off the last of the neighborhood cats and is happy to be the only kitty slinking from house to house for attention.”

“Okay, so my cat has territorial issues.”

“Your cat loves attention as much as you love shoes.”

“You’ve got me there. Thanks for taking care of her. The wedding was beautiful. The ceremony took place on the beach under a billowy white tent with giant white chiffon columns that moved in the breeze. There were tropical flowers everywhere in big showy vases that looked gorgeous against the pink sand. And Chelsea was breathtaking and totally buying into the whole ‘Here Comes the Bride’ thing.”

“With all the malarkey she used to spout about how superficial and useless weddings are, I really didn’t think she’d do it,” Hannah said.

“Guess that just goes to show there’s a princess bride in every girl because my anti-marriage little sister who swore she never wanted a wedding, played her part to the hilt. Matt’s mom was beyond thrilled. And as much as I adore a Magnolia Bay wedding at the Wedding Cottage or an all-out Charleston wedding at one of the plantations, Bermuda was the perfect spot.”

“Did they take the plunge?”

Shelby had shown the Chicks the pictures of the resort that catered to destination weddings. One of the traditions was the bride and the groom decked out in their wedding clothes and jumping off a long pier into the lagoon at the end of the ceremony. The before pictures in the brochure with the happy couple sailing through the air were adorable, not so much for the after pics.

“They were supposed to, but Chelsea chickened out at the last minute. They did take some amazing underwater photos in the pool the day after in her wedding dress. I can’t wait for you to see them.”

“Wow, your baby sister. Married.” Shelby knew Hannah didn’t mean it, but the silence implied, and you’re not. Or maybe that was just Shelby’s imagination because it wasn’t like Hannah was married either.

“Come on, Hannah, I got enough of that at the wedding.”

“Oh, you know I didn’t mean it that way. Darcy and Miranda are the only ones leaving the brood.”

“No way. Once a Chick, always a Chick. No man, not even one of the insanely sexy Mauldin brothers can change that.”

“So how much longer until you’re home? We miss you.”

“Probably tomorrow. My last stop is St. Augustine; I’ll poke around a bit, and then I’ll be home.”

“Poke around as in buy shoes?”

“I didn’t say that, but if something fabulous and strappy calls to me, yes.”

“Is there a cute guy there to buy those strappy sandals?”

Okay, not only was Shelby the Goldilocks of the dating world, it seemed that men who dated her wanted to buy her things. The Chicks lovingly called her a shoe whore; not that she put out for a pair of Christian Louboutins or Jimmy Choos. But if the man she was seeing insisted, she had a really hard time saying no. To the shoes.

“No cute guy. By the way, how’s Stacia doing with the store?”

Stacia was the youngest of their group and a recent college graduate. She’d run Bay City Beans Coffee Shop for the last four years and, from time to time, helped Shelby and Hannah out with their Main Street shops.

“Oh, you know Stacia, she’s tried everything in the store on by now, and is probably starting on those cute maternity dresses you have on sale.”

Yeah, Shelby wouldn’t be ordering any more maternity clothes. While she had sold a lot lately to the young mothers-to-be who lived in the ritzy new Magnolia Run section of the Bay, they were too much of a reminder that Chelsea almost didn’t make it down the aisle.

She’d wanted to start a family right out of grad school; and Matt never said no to her. Being the most impatient person on the planet, when she didn’t get pregnant after a few months, Chelsea was positive there was something horribly wrong. Shelby told Chelsea it was just her hypochondria talking. Unfortunately, Chelsea was right and, six months ago, she was diagnosed with premature ovarian failure.

Since the diagnosis, Chelsea had been obsessed over her condition and had grieved the loss of being unable to have kids. Not good pre-marriage juju. The last couple of months, she and Matt fought a lot, and if Matt’s mom’s dying wish hadn’t been to see her son married, Shelby had wondered if the couple would even still be together. But any doubts Shelby had were dispelled the moment her sister walked down the aisle.

There was an epidemic of I do’s that day, at least seven brides flitting about the resort with their gorgeous grooms. It was like a fairy tale wedding day on steroids, making it almost impossible for Shelby not to wish she had a great guy. Maybe a couple of kids down the road. She wasn’t ready to settle down and start a family today, but—.

“Shelby. Party of one,” the hostess announced to the far reaches of the universe. Maybe it was time for Shelby to change that.

Caught Up in You is currently available in digital format only: 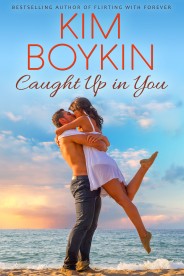 Did you know that Caught Up in You and many titles are available digitally from Tule's own bookstore? Check it out!