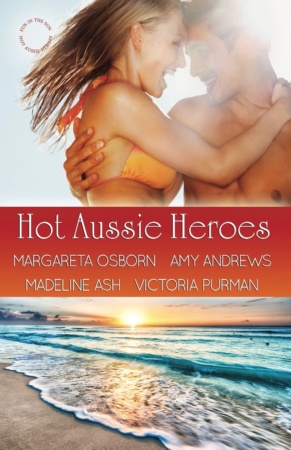 Follow the stories of these four hot Aussies and the women they love. A cowboy, a summer fling, a millionaire, and a Hollywood heartthrob make for four whirlwind romances.

The Cowboy by Margareta Osborn

Carina Chapman wants a vacation.  Somewhere hot. Somewhere decadent. Somewhere far, far away from her complicated life in New York. Somewhere in Australia appears to be the answer, until Carina discovers her PA has booked her into the wrong resort.

Cowboy Jake Richardson can cook a mean camp-oven roast, track wild horses, breed cattle and knows Australia’s rugged High Country like no other, but he needs to diversify if he wants to keep his land. Tourism seems like the answer, but his housekeeper just quit, the rooms aren’t ready and he doesn’t know a short black from a cappuccino.

Then his first guest arrives.

City slick Carina is smart, classy and disgruntled that her dreamy five-star retreat has been replaced by a rustic homestead beside the Barcoo Creek. Jake has seven days to convince Carina he can deliver all the items on her vacation checklist – including the five-step method to an everlasting relationship…

The Hero by Amy Andrews

The darling of the Aussie small screen, Edwina Calloway, has always had a thing for her ex co-star the hunky Justin Wilde – even before he took off to Tinsel town and became a Hollywood heartthrob. And Justin always had a thing for her. Except she was married so neither of them ever crossed that line. But now Justin’s back in Oz to take part in a celebrity car rally with Edwina riding shotgun and she isn’t married anymore…

It seems the entire country is holding its breath for their much vaunted reunion. Can they survive a five day road trip, just the two of them alone in the car under intense media scrutiny without finally getting naked and doing the Wilde thing? And if they can’t, what happens when Justin heads back to Hollywood?

The Playboy by Madeline Ash

Innocent Alexia Burton needs to become sexually confident for an upcoming acting role, and that means taking a lover. Someone she’s attracted to. Someone who’ll teach her what she needs to know, but not ask for more than she’s prepared to give. She needs to learn the intensity of true desire and then have him walk away.

Parker Hargreaves is determined to make amends for treating Alexia badly all those years ago. He’s changed and wants her to think better of him. If that means letting her sharpen her sexual moves on him, so be it. He’ll do it. His playboy reputation certainly won’t suffer.

He just doesn’t count on walking away being so hard.

The Millionaire by Victoria Purman

Renowned photographer Chris Malone is fed up with fame and disaster. All he wants is anonymity and a chance to recharge. Suburban journalist Ellie Flannery has other ideas. If she can just convince her long-time idol to support her favorite cause, she knows her fund-raiser will be a huge success.

After refusing at first, Chris decides to co-operate. When he’s forced to defend his own reputation as well as his family’s, he decides he wants something from the idealistic and sexy-but-doesn’t-know-it Ms Flannery Ellie in return: her heart.

But Ellie has scars that no one has ever seen, and she doesn’t want to open herself up to anyone, much less a man with such an unflinching eye for the truth. Can Chris convince her to strip herself bare, in more ways than one? 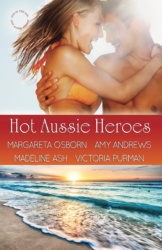 Hot Aussie Heroes is available in the following formats: 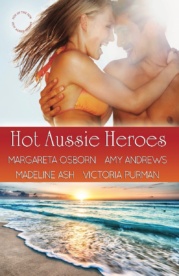