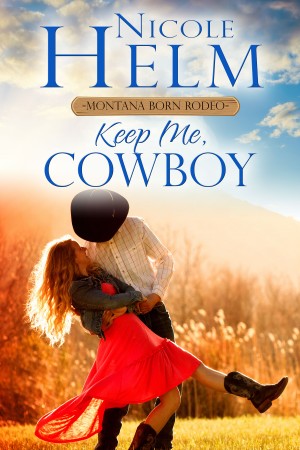 Rodeo cowboy Cole McArthur has spent the last ten years running from Marietta, Montana, from his father’s expectations, and from the only woman he’s ever loved. But now his past is at his front door, begging for his help.

Jess Clark doesn’t want to face the only man who’s ever claimed enough of her heart to break it, but her foster family needs their prodigal son home, and she owes them too much to not make that happen. Seeing Cole for the first time in a decade unlocks the kind of desire she’s only ever felt for him, and never acted on with anyone.

Back in Marietta facing family betrayal and family secrets, heat explodes between them, and feelings buried long ago rise to the surface. But can Jess convince this wandering cowboy that his home is with her?

Cole wanted her. Desperately. Like he was eighteen again and any contact with a girl was something to crow about. Something to drool over.

What the hell was wrong with him? He had to turn away again. Obviously, he’d taken one too many hooves to the head. He might believe in soul mates and all kinds of fantastical things, but he wasn’t stupid enough to think reality didn’t have a say.

His reality was that his father had wanted him to submit, to be a McArthur and all that went with that name. Dad had used every last tool in his arsenal to accomplish it. And when that didn’t work, dear old Dad had used everything he could to make Cole disappear.

Cole had let him, because it had meant that Jess had gotten everything she’d wanted. Family, security, a future, a chance with her brother.

There’d been no point in giving her a choice; why would she choose Cole over that? At seventeen?

Oh, he’d left like a coward, but he’d had the right of it, and he wouldn’t let time change his determination on that. He also wouldn’t let his father waltz in and do more damage. Not now.

He could put his hands on her. Right this second. He could slide his rough palms over the slight curve of those hips, the dip of her waist, the not-quite-handful of breasts. They could give into the things that had always been between them, a feeling so strong he’d actually been a little afraid back then. Afraid to take more, and she’d never offered all. She would have, but he’d left.

He could have her, here and now, as he’d never had her, and he didn’t think she’d resist, but it would somehow be wrong. It would turn everything that he’d held as a sweet memory even more bitter than his shitty non-goodbye.

And it would have his father’s fingerprints all over it. Again.

Never again would he let that happen. His life was his. His choices were his. Everything imprinted by a McArthur was off the table. “I can’t help,” he said, turning to meet her eye this time. He wasn’t a coward anymore. Not anymore.

“Because you hate him that much?” she asked, tears in her voice if not in her eyes.

“Yes.” She would too if she knew. And he wouldn’t take the image she had of Dr. Gerald McArthur, saint of Marietta and upstanding family man, away from her.

She was silent for so long, he almost asked if she was all right, but then she blew out a breath. “Well, I am sorry.”

“Me, too.” Genuinely. It was a bit of a surprise, to be sorry he couldn’t go home. He hadn’t wanted to go home. Not one second of one day since he’d left. But he was sorry she’d come all this way to be disappointed, even if it had been a bit foolish on her part.

“This is going to make things difficult,” she went on, her eyes taking in the kitchen before she turned and sauntered through the archway and back into the living room.

Tight round ass swaying back and forth, right in front of his eyes. Would she still be the girl of practical underwear under the practical clothes, or would age and womanhood have given her something more—

He needed to focus on getting her out of here, back to Marietta and his past where she belonged. He should probably offer her a ride to the airport. Some money for a cab maybe. He should offer her something. As much as his instinct was to be a total dick, she’d always muddled up those instincts.

But she didn’t head for the door, she walked into the center of his living room, studied the chair, the sofa, and then settled herself on the couch, wiggling her butt around making a big show out of getting comfortable.

“What are you doing?” he demanded, not sure why her ass print on his couch was sending him into a bit of a panic.

“Oh, I think you misunderstood my apology,” she replied, all wide-eyed innocence. Fake-as-her-smile innocence. “I’m sorry…that you’re being difficult.”

“Difficult,” he repeated, sounding dumb to his own ears, but she wasn’t making any sense.

She angled her chin up, giving him a purely obstinate, you’re-so-screwed smirk. “Because I’m not leaving until you agree to come with me.” She studied either end table, then pulled the bag on her shoulder into her lap, rummaging around until she pulled out an e-reader. “No reading material, huh? Luckily I have something to keep me busy until you’re ready.”

She didn’t even look at him. She started hitting buttons on the little machine, purely absorbed in the task at hand.

Well, that was fine. He was not going to be beaten by five-foot-five of not much of anything.

Except your heart. Yeah, screw his heart. He had a long, long time ago. “Hope you’ve got years of reading material on that thing.”

Her smile went sharp, her eyes narrowed as they rose to meet his. “I do. But you’ll give in. You know why?”

“Enlighten me,” he sneered.

Keep Me, Cowboy is available in the following formats: 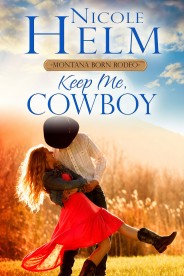 Did you know that Keep Me, Cowboy and many titles are available digitally from Tule's own bookstore? Check it out!