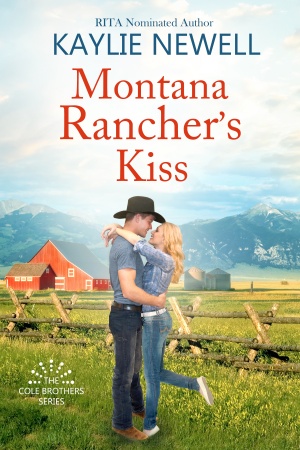 Rancher Brooks Cole has only ever loved one woman. But when she marries his best friend after high school and moves away, his lifelong belief that he’ll eventually lose the people he cares for most is cemented in stone. Turning his back on love, Brooks shifts his focus to something safe—running his family’s dude ranch with his twin brother.

Daisy Hudson always longed to leave her small Montana town—and all the associated pain—far behind. But after a divorce and her mother’s death, Daisy accepts that she must stop running and mend the country fences she broke so many years ago. Determined to stand on her own and start over, Daisy returns to Marietta and answers an ad for a cook at the Diamond in the Rough dude ranch. And then her first love opens the door.

As long summer days melt into sultry summer nights, Brooks and Daisy remember why they were once so wild for each other. But forgiving is never easy and second chances aren’t guaranteed…

Daisy Hudson unbuckled her seat belt with trembling hands as the passengers around her began standing to open their overhead bins. No matter how many times she’d rehearsed this day in her mind, it still hadn’t prepared her for the actual moment. A sick stomach, an aching heart.

She glanced out the airplane’s smudged window to the Montana mountain range in the distance. It looked like a row of monster’s teeth, jagged and dark against the robin’s egg sky. A sky so big, it was hard to comprehend. But it was those teeth that worried her. Looking like they were ready to chew her up and spit her out all over Marietta’s picture-perfect Main Street.

She stood as the elderly woman who’d been sitting beside her shuffled into the aisle. She turned to Daisy and smiled, her cottony hair like a cloud on top of her head.

Daisy smiled back, fighting tears. She wouldn’t cry. She would. Not. Cry.

“Thank you,” she said. “And have a nice time visiting your son.”

And then the woman was gone, lost in the crowd of passengers eager to debark the stuffy plane. Personally, Daisy was tempted to stay. She could ask the cheerful flight attendant for a blanket and a pillow, and then curl right back up in her seat for the next six months or so.

Instead, she took a deep breath and hoisted the leather carry-on over her shoulder. One of the things Alex had left in his side of the closet when he’d left. In those first few days, she’d sat on the couch and held it close to her chest. Thinking she could smell him in the fibers of the bag. A trace of his cologne, the faint scent of hotel soap. But then she’d gotten the call that her mother had died, and all that longing and despair had turned into a yawning chasm, and it had scared her. She needed to go home. To try and make things right, even if it was too late to fix the things that mattered most.

She stepped into the aisle in front of a soldier in fatigues who insisted she go first. She thanked him softly, trying to remember the color of her baby sister’s eyes. Dark blue? Or were they brown? But the only thing she could picture with any clarity was Lily waving goodbye almost ten years ago now. Not quite out of high school yet, on the brink of making some hard decisions herself. But she’d ended up staying. Lily was all their mother had, and she wouldn’t leave her. But Daisy had. God forgive her.

She stepped forward, gripping the handle of the bag so tightly that her nails bit into her palm. She’d left behind so many things that day, thinking that she’d finally conquered her childhood pain. But in reality, she’d only been running away from it. From her mother. From Brooks…

At the thought of the boy she’d fallen in love with at sixteen, her chin trembled.

She followed the line of people up the tunnel, the muted sounds of the Bozeman airport growing louder and more significant in her ears. Her heart tapped against her breastbone, reminding her of a hammer against glass. How long before it would break?

There was a throng of people near the gate. Waiting for their friends and loved ones. Daisy squinted through the bright, fluorescent lighting, looking for her sister in the crowd. She only knew what she looked like now from her Facebook pictures—a petite blonde with a megawatt smile and a pregnant belly.

Suddenly, there was a ridiculous urge to turn around and get back on the plane. To fly right back to Boston, to her life that was broken, but familiar. She didn’t know if she could do this. She really didn’t.

And then she saw Lily. She was standing behind a woman holding up a sign for someone named Lois. Lily stood on her tiptoes and craned her neck. And when she locked eyes with her only sibling, she smiled.

Save your bacon fat!

Brooks Cole stopped in front of the cat food display at Monroe’s Market and pushed his Stetson back on his head. Elvira was fat enough. Did she really need something that boasted filet mignon on the label?

Without letting himself think too much about it, he reached out and grabbed a can, then two more, and tossed them into his cart. Whatever. She liked good food. Who could blame her?

He pushed the squeaky cart forward, checking one more thing off his mental list of groceries that he really should’ve written down. But to be fair, he wasn’t used to this part of running the dude ranch. Since Charlie was facing back surgery, they’d be out a cook for the entire summer. He was going to have to get used to shopping until they could find a replacement. Which only made him want to rush this new hire even more. He hated grocery shopping. The only thing worse in his opinion, was worming the cattle.

The market was quiet this morning, with only the occasional shopper passing him in that friendly, albeit zoned-out way that grocery shoppers had. Every now and then a teenage boy with the cracking voice to match, announced another special over the loudspeaker. Today it was beef. Buy one pound, get half a pound free. Not bad. Brooks added stopping by the meat counter to his list.

“Well, Brooks Cole,” a voice said behind him. “Fancy seeing you here.”

He turned. And immediately wished he hadn’t. Kylee Turner stood there, gripping her shopping cart like she was tempted to run him over with it. She wore tight jeans, and an even tighter western shirt which was trying its best to take his attention off the jeans. Her sleek brown hair hung in ripples past her shoulders, her long, dark eyelashes batting toward him like palm fronds.

She smiled, and Brooks braced himself. He knew that look. She was ready to spar, right here in Monroe’s of all places.

“And on a Sunday morning, too,” she said. “Shouldn’t you be in church?”

He smiled back. “I do all my praying at the ranch. You know that.”

“And why aren’t you in church?”

“I just came from there. If you must know.”

He glanced down at her shirt, which was gaping open to expose some very non-Sunday cleavage.

“I heard Charlie was down for the count,” she continued, shaking her head. “Shame. That means you get to do all the shopping. And I know how much you hate that.” She said this last part with a sparkle in her eyes. She actually loved anything that caused Brooks inconvenience. Or pain. Or discomfort in any way. They’d broken up a year ago, but she was still pissed at him. And rumor had it, wanted to get back together. That, he wasn’t so sure about, since she was mean as a damn snake every time he ran into her.

“Yeah, well,” he said in his best whatever drawl. It used to drive her crazy.

He smiled wider, satisfied. He could still hit a nerve. “We’ve got an ad up for a temporary cook. So it won’t be long.”

She pursed her lips. Obviously, she’d been hoping he’d have to grocery shop until the end of time.

Jamming his thumb over his shoulder, he went on. “You know…judging by the interest we’ve gotten so far. There were lots of numbers torn off that flyer when I came in.”

She shifted her gaze toward the bulletin board by the front door. “Well, I feel sorry for anyone who comes to work for you, Brooks. Since you’re void of any kind of emotion. You treat that dumb cat better than the people in your life.”

She’d never liked Elvira. One of the hundred reasons why they hadn’t worked out. Well, that, and the fact that his heart had always belonged to someone else.

Kylee examined her nails and an awkward silence fell between them.

He felt kind of bad for needling her. Maybe he should apologize. Or say something nice about her outfit. Something to throw some water on this new fire he’d started. She was prickly as hell, but she was right—his relationships could use a little work.

She looked up and narrowed her eyes. Her green eyeshadow sparkled like stardust under the aisle five lighting. “Isn’t that…”

Frowning, he turned. Standing in front of the bulletin board, was a woman wearing a white tank top and a pair of faded overalls. Her back was turned to them, her blond hair piled in a messy bun on top of her head. She was reaching for his flyer.

Brooks watched her. Wondering why she’d caught Kylee’s attention like she had. He let his gaze settle on her bare shoulders. Her long, slender neck. The wisps of honey-colored hair tucked behind her ears. And something stirred inside him.

And then Brooks felt his back stiffen. His heartbeat slowed in his chest, a steady thump, thump, thump, that did nothing to move the blood through his veins. His hands were suddenly cold, his feet inside his boots, numb.

“She’s got a lot of nerve coming back here,” Kylee hissed.

He didn’t answer. In fact, he probably couldn’t if he’d tried.

“I mean, after all this time?” Kylee looked over at him. He could feel the weight of her gaze, the meaning in it.

The woman in the overalls tucked the piece of paper from the flyer into her pocket. Then put her head down and walked out the door.

Montana Rancher’s Kiss is currently available in digital format only: 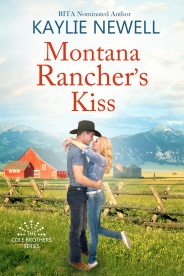 Did you know that Montana Rancher’s Kiss and many titles are available digitally from Tule's own bookstore? Check it out!