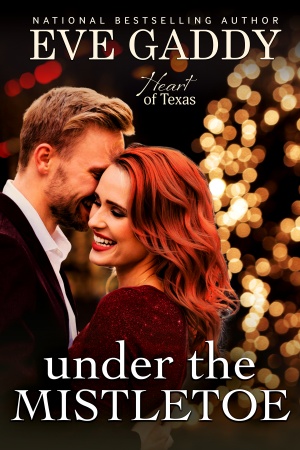 Can a kiss under the mistletoe be the beginning of a beautiful relationship?

Firefighter and paramedic Spencer McBride has never been tempted to change his happy-go-lucky bachelor status – until he literally runs into cute newcomer Georgie under the mistletoe.

Wounded after giving her heart to a man who wouldn’t commit, paramedic Georgie Durant has come to Last Stand, Texas, for a fresh start. Though tempted by the handsome Spencer, she’s too leery of his easy charm and the pitfalls of a workplace relationship to risk one with him.

But as they spend more time together amid the Christmas gaiety and Georgie sees Spencer’s dedication and devotion to the people he helps, she begins to wonder if this beguiling co-worker could be different.

Spencer has always been a man who knows what he wants – and he wants Georgie. But when the man from her past comes to town, determined to win her back, can Spencer convince Georgie to take another chance – with him?

It wasn’t a secret. Everyone who knew Spencer knew he loved Christmas.

The tree-trimming party was an open house at the Corbyn Mansion, and took place every year on the Saturday after Thanksgiving to start off the season. Everyone in town was invited. Trees for people to decorate, each with a different theme, were placed in every room on the ground floor. The whole place was lit up like a—well, a Christmas tree. Emma, Delilah and Amelia Corbyn really knew how to throw a party. Delicious cookies and beverages, alcoholic and non, were set on tables in each room. Since Delilah Corbyn was the chef who owned Dragonfly restaurant, the food was always great.

The Corbyns had outdone themselves this time. Mistletoe hung everywhere. In the doorways, from chandeliers, even in unexpected places like over a couch or hanging from the mantel. He wondered if one of the women had plans and, if so, who they planned to catch. He said as much to his brother Graham and Graham’s wife Bella. They were still newlyweds so he figured they’d already scoped out any excuse to kiss.

“What’s with the mistletoe?”

“This is my first Corbyn tree-decorating party,” Bella said. “Don’t they usually have mistletoe?”

At the same time both men said, “But not this much.”

“Who is that pretty redhead?” Spencer asked catching sight of a woman he didn’t know. She wore a long-sleeved, sparkly dark red dress. It hugged her curves lovingly but the best part, in Spencer’s opinion, was that it was blessedly short, showing off dynamite legs. You’d think with her red hair, it wouldn’t look good, but Mama Mia, you’d be wrong.

Bella shook her head. “I haven’t seen her before.”

“Neither have I.” And he’d have remembered her, that’s for damn sure.

He set off to wrangle an intro to the cute redhead. But he couldn’t find anyone who knew her. And she’d disappeared. He thought he’d find her in one of the rooms at the Corbyn Mansion, but no luck so far. Maybe she’d left already.

As he left the room someone called his name and said hello. He waved, and looking back over his shoulder, he ran smack into a woman in the doorway. He tried to grab her to steady her, but missed.

“Oh, crap,” the redhead said, wiping at her dress ineffectually. He realized her glass of wine was now empty.

Looking down, she said, “No, it’s white. Or it was. Thank goodness.”

Her voice was low-pitched, sweet and warm, a mix of bourbon and honey. Spencer snatched several napkins from a passing waiter. “I’m really sorry. I’ll pay for the dry cleaner.”

She looked at him then and smiled. “No, it’s my fault as much as yours. I wasn’t looking where I was going either.”

Her eyes were blue. Not plain old blue but a clear blue the color of the Mediterranean at sunrise. Eyes fringed with thick, dark lashes and set in a face with high cheekbones and a mouth made for kissing. He looked upward and smiled.

She appeared startled, then flustered. “Uh, I don’t think so.”

Unsurprised, Spencer laughed. “How about we settle for a handshake?” He held out his hand.

She put her much smaller hand in his and shook with a firm grip. “I’m Georgie Durant.”

“Spencer McBride. You must be new in town. Or just visiting.” Obviously he hoped she was the former.

“Yes, I’m new. I just moved here about a week ago. Some of my coworkers brought me to the party. I worried I was crashing but—” She shrugged. “They swore it didn’t matter.”

“Way too many people here to worry about one more. Besides, the Corbyns welcome everyone to the party. It’s tradition.” Since they still stood in the doorway, he looked up again. “Like mistletoe.”

She laughed. “Nice try, but it’s still not happening.”

He grinned but didn’t reply.

Lana Jones, a paramedic he worked with sometimes, stopped to talk to Georgie. After greeting Spencer, she pulled Georgie away with her. Looking over her shoulder, Georgie said, “Nice to meet you. Maybe I’ll see you around.”

“I can guarantee you will,” Spencer muttered to himself.

The next time he saw her she was standing in the doorway of the library. Under the mistletoe. Again. The library was Emma Corbyn’s domain, which was reasonable since she was Last Stand’s head librarian. Books lined shelves from floor to ceiling. He’d bet his last dollar they were organized just like the public library. There was a huge tree on one side of the room, already partially decorated with lights and some ornaments. A roaring fire, dark wood furniture with red upholstery, and an oriental-style rug gave the room an elegant vibe. Knowing the Corbyn ancestors had been in Last Stand since the Texas Revolution, he knew there were antiques all over the place. Finally, a table with a bunch of kids making something with glue and sparkles completed the picture.

The woman in the doorway made the setting perfection. At least this time he hadn’t actually run into her. He walked up behind her and said near her ear, “You’re standing under the mistletoe again. Some men might wonder if that was deliberate.”

“I am not.” Georgie looked up and frowned. “Purely accidental. Besides, it’s hard to avoid. And it’s still not happening.”

Georgie laughed. “Well, that’s original. I’ll give you that. Most men don’t come right out and say it.”

“I wanted to be clear, so that you’d know when I ask you out it’s legit.”

That was noncommittal. “What about you? Any husband or boyfriend?”

“Great. We have something in common. Besides meeting under the mistletoe.”

Just then the carolers came through. Dressed in Victorian period clothes, they circulated through all the rooms singing Christmas carols. Problem was, he turned around and she was gone. Damn, why did she keep disappearing?

Ordinarily he’d have shrugged and taken it as a sign. But there was something about Georgie Durant that intrigued him, so he kept looking.

He poked his head into each room, determined to at least get her phone number the next time he saw her. Unless she’d left already. Luckily, she hadn’t. He found her in the foyer, standing under another sprig of mistletoe that hung up high from a chandelier.

“Hi. Why do we keep running into each other?”

“Probably because I’ve been looking for you. You realize you’ve done it again, right?”

He cast his eyes upward. “You should be more careful. All men aren’t as understanding as I am,” he added modestly.

She looked up too, and frowned. “Oh, for—I can’t go around looking up every time I stop to talk or to glance around a room.”

“I suppose not. But you do seem to have a knack for the mistletoe.”

“Entirely accidental. I’ve never been to a party with mistletoe coming out the yin-yang.”

Spencer laughed. “Great description. How about we shake hands again? Unless you’ve changed your mind?” he added, knowing she hadn’t.

“You say that like it’s a problem.” Solemnly, he held out his hand. They shook and he thought again that she had a surprisingly strong grip. Maybe she was a physical therapist.

“So tell me, Georgie Durant, what brought you to Last Stand?”

“A new job. I’ve been in Houston for the last few years and I needed a change.”

“The fire department. I’m a paramedic.”

That explained her grip. Spencer stared at her. He’d been off for the last week or he’d surely have met her.

“Spencer? Why are you staring at me?”

“Sorry. I was just surprised. I work for the Last Stand Fire Department too. Firefighter paramedic.”

“I’ve been on a break for the last week and out of town. I knew they were looking for another paramedic but no one told me you were the new hire.” Which he’d take up with his so-called buddies. “I can see why, of course.”

“I don’t understand. What does that mean?”

“Are you kidding? A beautiful single woman joins the paramedics and not one of my friends tells me?”

She blushed and laughed. “Beautiful is stretching it but thanks.”

He looked at her, taking in the wavy red curls, picture-perfect face and killer body in that sparkly red dress. She was cute, but a beautiful kind of cute. “Nope. If anything, beautiful is an understatement.”

Under the Mistletoe is available in the following formats: 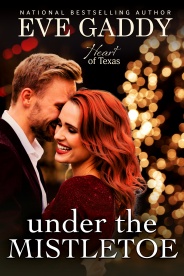 Did you know that Under the Mistletoe and many titles are available digitally from Tule's own bookstore? Check it out!