Behind every lost dream lies a second chance…

When adored town spinster Joy Talley ends up in a coma after a peculiar accident, she is surprised and incensed to hear what is being said in her hospital room, including plans for her funeral. When she finally wakes, her well-meaning, but bossy, brothers and sisters dismiss her claims, thinking her accident has knocked her off her rocker, but Joy has never felt better, and is determined to set the past right.

Now Joy must face her darkest secret and risk reopening wounds caused by an old flame who rejected her more than twenty years ago. But taking risks brings change, as well as a new, younger man into Joy’s life, making her feel like a teenager again. Suddenly Joy’s once humdrum life is anything but boring and routine and the future beckons, exhilarating and bright.

I’m still breathing, so I obviously didn’t kill myself. I just want to say that right now. I know what it looked like when my brothers and sisters found me dangling from the roof over the balcony, but—did any one of them ever think to ask why in the world I would have tied a rope around the crumbling chimney and jumped off the roof, especially when there was a perfectly stout and sprawling apple tree growing right next to Momma’s front yard?

The magic apple tree, as some people still call it, would have been the perfect hanging tree, but, of course, they didn’t think of that. I could have even removed the cover from the old well next to the orchard and tossed myself down into its murky depths; or worse, let myself be washed away in the so-called Spring of Good Luck that spiraled deep into the ground behind our house; but I didn’t, because killing myself, accidentally or on purpose, wasn’t ever part of my plan.

My plan was to bid farewell to the past and live free in the present, to let go of the one person who knew the truth about me. For years, I had been clutching the memory of us to my heart like a bride clutches her roses, although I would never be his bride. That much was certain, since he had let go of me a long time ago and married someone else. So, I decided to be brave as I stepped onto the roof. It was time to let go . . . time to trust the future. It was just my luck that my leap of faith landed me dangling in a tangle of rope.

Undeniably, I am a Talley and sometimes our luck is good and sometimes it’s bad, so I shouldn’t have been surprised when I fell, or that my brothers and sisters thought I jumped off the roof on purpose. They had no idea why I was up there, although it probably wouldn’t have made a difference if they had. When a family relies on luck to explain anything and everything, they’ll naturally leap to the most horrible conclusion at the absolute worst time. This was one of those times.

When they saw me dangling over the balcony, they thought the worst, and all dashed into the house and up the stairs. If any one of them had a lick of common sense, they would’ve looked at the grimy soot on my hands and known I was up to something more important than trying to kill myself, but I guess it was the easiest conclusion they could come up with as they spilled onto the balcony and reached out past the railing to pull me in.

Rory, the taller of my two brothers, wrapped his arms around my limp noodle legs and lifted me up, while River pulled out his pocket knife and cut the rope, thank goodness, loosening what they mistook for a poorly tied noose and pulling it over my head.

“She never was good at tying a knot when we were kids,” River said.

“I wonder why she did this.” Carey’s pitiful weeping made me want to scream, but of course I couldn’t.

“Bless her heart; did she think we didn’t love her?” I couldn’t see her, but I already knew Nanette was digging through her purse for a used tissue.

It’s funny that I heard my brothers and sisters speak every day, but the way their voices echoed around me in that moment, their Okie accents rolling around in their mouths, they sounded like a bunch of hillbillies. I reckon I sound just like them, but I hope I sound a little bit smarter. Now, I’m not putting them down, just because I made the honor roll my senior year and they didn’t, but to be honest, they weren’t always the brightest bulbs in the chandelier. Take my sisters, for instance. Each got her GED and husband, then, had passels of kids; and I have to admit seemed to be happier for it at the time.

“Do people who do this still go to heaven?” Rory. I had to feel sorry for my baby brother. He sounded like he might cry, even though he was the bigger and the stronger of the two boys. He’d always had a tender heart—and the worst grades in school. I’m not really surprised he thought I tried to kill myself. To be honest, I’m not shocked that either of my brothers came to that conclusion. I’m just annoyed. They never were book smart, but now, they were definitely tool and dye sharp like Daddy. Those boys didn’t even bother with a GED. They could rebuild any engine around and nobody knew how they first learned it, so they opened an auto shop called The Greasy Wheel where I worked as their secretary, just around the corner from Momma’s house.

“Momma would say, no,” said Carey. “People who kill themselves don’t go to heaven.”

I heard a gasp. Nanette’s voice whispered back, thick with indignation. “You don’t know what Momma would say.”

“No matter if I do or not,” Carey said, her voice hitting a high pitch, like she had gone a little nuts from all the stress. “Knowing Momma, she’d make some kind of charm and then turn around and try to pray Joy into heaven. Because we’re lucky—except when we’re not. Am I right?”

Nanette’s voice turned sharp. “She doesn’t need to be prayed into heaven. And besides, she’s not dead!”

Before I knew it, I was stretched across Carey’s and Nanette’s laps in the backseat of the truck headed to the hospital, instead of to the funeral home to see Momma laid out in her Sunday best, which is why they’d all come to pick me up in the first place.

My heart leapt toward Momma’s memory, but then I realized it was just the truck lurching. I felt the hands of my sisters preventing me from rolling onto the floorboard.

“It won’t matter if you jostle her to death ‘fore we get there.”

I wished I could rub away the prickling pain in my neck, but my arms were as heavy as the musty bricks in our chimney. Nanette moaned, as if she was in pain, too, and I imagined her pretty olive complexion turning sallow right up to her thick brunette ponytail. I’ve always been a little bit jealous that she wasn’t made to suffer my frizzy red mane.

“Can you two please get along?”

My brothers never have been able to agree on anything. Not even on how to run their shop. Eventually, they had to hire a manager to manage them because they couldn’t manage to get along with each other. Of course, it was me they hired, so I wondered what they were going to do if I didn’t come out of this alive.

“We probably shouldn’t have moved her,” Nanette said.

“I guess we could’ve just let her hang from Momma’s roof a few more days,” River said. “That’s how long the ambulance would’ve taken to find her.”

Momma’s house really was difficult to locate at the end of a winding red dirt road that zigzagged through ten miles of twisted woods before opening up to a thousand acres of pastureland and thousands of towering oak, elm, and pine trees in the background—definitely not flat and treeless like the western part of Oklahoma. Spavinaw Junction is tucked in between Green Country and the Ozarks, right in the three corners of Oklahoma, Missouri, and Arkansas. I’ve never wanted to live anywhere else, unless you count the ocean, and as I lay across my sisters’ laps I wondered if I would ever again see our lofty pastel blue farmhouse, a century-old structure admittedly in need of a makeover.

I loved how it sat like a giant Easter egg where the bluffs and pasture meet, its two stories trimmed in flaking white paint and shaded by a couple of towering oak trees in the front yard. Anyone looking at our house from the outside would see it as an ideal, albeit a bit sagging, example of Americana, never guessing at the long hidden mysteries its secret spaces and passages harbored, one of them being my very own.

Waking Up Joy is available in the following formats: 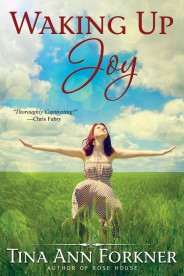 Did you know that Waking Up Joy and many titles are available digitally from Tule's own bookstore? Check it out!