Eve Gaddy stopped by the Tule blog to discuss the third book in her Texas True series, Texas Made! 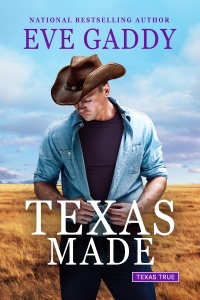 Where did you get the inspiration for Texas Made?

Marshall, the hero, is in the two previous books, so of course I wanted to write his story. He’s a pure country guy and I thought it would be fun to pair him with a pure city girl and then see what happens when they fall in love.

How is Marshall different from the other Walker brothers, Gabe and Chase? How is he the same?

Gabe is a metal artist and Marshall is a horseman, so their professions are quite different. He’s probably more like Chase, in that Chase is a saddle bronc champ and also part owner of the ranch, so they have the ranch and horses in common. They all have dark hair and similar builds.

Jaclyn is someone I admire for going after what she wants and being successful at it. She’s also a good friend and is somewhat vulnerable when it comes to men. So Marshall has to work hard to convince her to let him in.

I hope that readers will relate because she has some hard choices to make concerning her career and her love for Marshall. I think how she manages both, and her setbacks trying to do it make her very relatable.

Marshall loves horses and dogs. So do I. :)

When I’m in Texas I usually write in my office or my den. We spend a lot of time in Colorado and when I’m there I’ll write at the kitchen table or on the deck. The drive there is over 15 hours, so I write in the car as well.

Just finished Legacy by Nora Roberts. Repeat by Kylie Scott right after that, and am now reading a Carly Phillips book—Take Me Again. I haven’t ever read anything of hers and it was on my Kindle. Next up is Jane Porter’s Montana Cowboy Daddy.