A Marietta Christmas: A Short Story

It’s the week before Christmas and all through Marietta no one is stirring, except in Grey’s Saloon where a sack full of hotties from last year’s calendar shoot and their ladies are toasting another wonderful Marietta Christmas… But there are a few surprise gifts in store waiting to be unwrapped by Charlie and Logan, Emily and Lyle, Gabriella and Kyle, Molly and Todd, and Keely and Jonah… Which are both naughty and nice!

Charlotte Foster did a whole body shiver as she slammed the truck door. She breathed into her hands which, despite two pairs of gloves, were already feeling the chill, only two seconds after she’d jumped out of the heated cab.

The reflection of the fairy lights looped down Main Street twinkled in the frozen snow which edged the sidewalks as she headed across the courthouse’s parking lot. Her destination: Grey’s Saloon—and the now annual pre-Christmas get-together she, her twin sister Emily, Molly, Keely and Gabriella had organized for their own hotties and the seven other first responder hunks Charlie had photographed a year and a half ago now for Marietta’s very own charity calendar, Marietta Men for All Seasons.

Last year the Hottie-Toddy, as Charlie had christened their meet up, had been arranged to celebrate the amazing sales of the first run of the calendar, and to launch the reprint Em had designed for the New Year. This year they had decided to do the get-together again the Friday evening before Marietta’s Christmas Stroll—as a chance to catch up with everyone’s business and enjoy a pre-Christmas drink now that Thanksgiving was out of the way.

She’d driven past Harry’s House on the way here and hadn’t been able to stop grinning at the sight of a group of carefree teenagers having a snowball war in the front yard. Harry’s House was the reason they’d all gotten together a year and a half ago. The calendar had been done to raise money for the house named after Harry Monroe, where kids that needed it could find a quiet place, or a friendly space, or even just someone to help them with their homework. And thanks to the spectacular sales of the Marietta Men for All Seasons calendar and a bunch of other great Marietta fund-raising initiatives, Harry’s House was now doing what it was supposed to do—providing a backdrop for snowball Armageddon.

As she passed the Main Street Diner, still buzzing with the evening’s supper crowd, her heart butted her tonsils. The kids who used Harry’s House weren’t the only ones whose lives had benefited immensely from their calendar. Her whole life had been changed for the better in the last twenty months, too.

After spending years wandering the UK and Europe and then the US, looking for the perfect shot as a freelance photographer and believing she didn’t need or want a place of her own—she’d somehow found her way home to this small Montana town, and made a space in her heart for her very own cowboy. Rancher and reserve sheriff’s deputy Logan Tate. Aka Mr. December.

Her phone buzzed in her coat pocket.

Her very own cowboy who was probably going to be scowling when she arrived at Grey’s from the number of messages he’d been sending her during her half-hour drive from their ranch The Double T. She hurried down the sidewalk, breathing heavily, and fished the phone out of her parka to read Logan’s latest love text.

Where the hell are you? Is everything okay?

She could read the panic in his voice, and felt the familiar prickle of guilt. Better to keep walking and put him out of his misery than stop to text him a reply—especially as her fingers would probably freeze.

It was only eight o’clock. She was only half an hour late—not at all bad for her. Plus, she had a good reason for her tardiness, she thought, as she examined the screen saver she’d uploaded to her phone before leaving the ranch.

She’d had important business in her dark room that couldn’t be rushed, developing the batch of black-and-white shots she’d taken that morning of Logan and his former ranch hand Flynn O’Connell while Flynn’s mare Baby give birth to her first foal.

Charlie clicked the photo app to admire her favorite shot from the shoot in more detail as she walked. Her breath clogged her lungs all over again.

The close-up of Logan’s hands as he wiped amniotic fluid off the newborn colt was like a snapshot of the man himself and everything she had come to adore about him. Scarred, tough, strong, gentle, his hands were beyond sexy, but also utterly dependable.

She blinked back the sting of happy tears and shoved the phone back into her parka.

Good grief Charlie, do not start crying or your lashes will freeze to your eyeballs.

Honing in on the yellow glow of the lights from Grey’s Saloon at the end of the block, she could hear the sound of music and laughter drifting into the night. She was just about to open the bar’s doors when she spotted Lyle Tate’s truck parked across the street in front of Marietta National Bank.

Her heart lifted. Cool, Em must have gotten back from picking up her lover, Logan’s brother Lyle, from his week-long smoke-jumper off-season training session in Bozeman. But then she squinted. Was that steam on the windows? And why did the truck appear to be rocking?

A laugh popped out of her mouth as she realized what was going on.

She choked back another laugh. Boy, was she going to have some serious taking-the-mickey ammunition when the two of them finally made an appearance at the Hottie-Toddy.

He stood straight and tall in snow boots, battered jeans and a checkered shirt, his shearling jacket draped over the barstool in front of him, looking ruggedly hot, not unlike all the other calendar hotties who were ranged around the bar. Mr. January, the fire chief, Langdon Hale, was standing by the jukebox busy shooting the breeze with local paramedic and former Mr. March Patrick Freeman, and FEMA official Kurt Mayall, their Mr. May, who looked enough like Chris Hemsworth to make Charlie want to start quoting Thor movies at him and make inappropriate comments about his hammer. Tom Reynolds, their flying doc, aka Mr. June, had been cornered by some eager young thing at the far end of the bar. While Rob Shaw, the sheriff, was deep in conversation with his K9 officer Brett Adams—aka Mr. August and Mr. February. She couldn’t see Mr. September, Gavin Clark, but she suspected the ER doc was probably stuck on shift. Her gaze finally rounded back to the other end of the bar where Mr. October, fireman Kyle Cavasos, Mr. November, forest ranger Todd Harris, and Mr. April, search-and-rescue pilot Jonah Clark, were all arguing about something mightily important—probably ice hockey—while Logan refereed.

She had a weird moment of deja-vu from the time twenty months ago when she’d been sitting in one of the booths in Grey’s admiring the same smorgasbord of hotness and had the brightest idea of her entire life—namely getting them all to pose nekkid, or as nekkid as she could get them, for charity. But this wasn’t quite the same smorgasbord of hotness she conceded, because as well as Marietta’s first responders, standing with some of them were the women they had hooked up with over the last year, and who Charlie now considered some of her best friends.

The super brainy Keeley Andersen-Clark was rolling her eyes as she joined in the hockey debate tucked next to her husband, Jonah. While Todd had his arm anchored around Molly Cordero’s waist as if he was worried she might wander off.

A Marietta Christmas: A Short Story is available in the following formats: 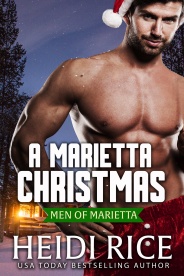 Did you know that A Marietta Christmas: A Short Story and many titles are available digitally from Tule's own bookstore? Check it out!