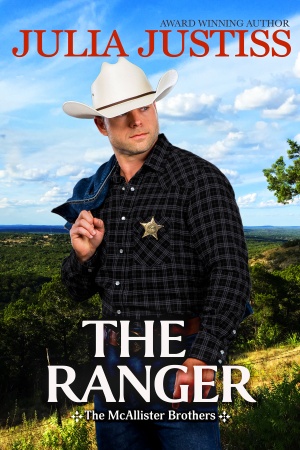 He can’t resist a puzzle…

When Texas Ranger Brice McAllister spies a sexy woman in short shorts gardening in her backyard, he can’t help but flirt. She shuts him down hard, and Brice is astonished when he realizes this alluring woman is also the aloof and dowdy librarian—complete with thick-framed glasses and a shapeless dress—who helped him research land deeds earlier that day. He’s instantly intrigued and sets out to discover more—namely, why she’s clearly hiding herself.

After one side of her crime family is involved in her fiancé’s death, Maria Giordano puts half a continent between herself and her L.A. home and family. She moves to Whiskey River and reinvents herself as “Mary,” a serious and plain librarian. Her only indulgence is her garden and cooking with her neighbor’s young daughter. And then she meets Brice.

Maria has every reason to avoid and resent a man with a badge, but when she needs protection, the last man she thinks she can trust is the first one she turns to.

With a satisfied sigh, Brice McAllister finished the last of his take-out burger and leaned back in the Adirondack chair on the deck of his brother Grant’s newly refurbished cabin, sipping a soda water and admiring the view across the Balcones hills and down to the narrow valley through which the creek ran.

“Got to admit, Great-Grandad chose a prime site to build his cabin,” he said to his brother Duncan, who dropped his lean frame into a chair beside him. “Can see practically to three counties from here.”

“Course, when he built it, there were still Comanche raids in the area as well as marauding outlaw bands,” Duncan said. “He needed to be able to see to three counties to protect his family.”

“Credit my lovely wife,” Grant said, coming out to join them. “The grunt labor of ripping out floors and walls, drywall, painting and finishing was mine, but the touches that make it so special are all her.”

“She’s a terrific designer,” Duncan said. “The place is modern and comfortable, but it’s still a cabin. Nothing frou-frou or cutesy, despite being furnished by a girl.”

“Speaking of wives, did you married guys get a special dispensation from your better halves to allow you to meet for lunch here today? I mean, not that you can’t come and go when you please,” Brice said, adding a bauk-bauk-bauk chicken sound imitation.

“Nah, he’s just jealous. Because we go home to two beautiful, hot, talented babes at night and he just has an empty condo in Austin,” Grant replied. “So sad. Not even a dog to keep him company.”

“Well, he’s the youngest. He always was a little slow.” Duncan grinned.

“If I weren’t so comfortable in this chair, I’d get up and whup you,” Brice said.

“You could try, but I wouldn’t advise it,” Grant said.

“Enough brotherly mutual admiration,” Brice said dryly. “I’ve just finished up a case and am cooling my heels, waiting to be summoned to testify at the trial, so I thought I’d rummage around and see if I can turn up anything on those harassment incidents you’ve told me about.”

“I’d bet you anything Marshall Thomason is behind them,” Duncan said.

“Just because the two of you have detested each other since high school isn’t enough reason to put him under surveillance,” Brice said.

“Maybe not, but something isn’t right there,” Duncan said. “Is it only coincidence that Harrison started having all sorts of problems—fence lines cut, brush damning up creeks—after she inherited the Triple A? With Thomason approaching her in his slick rich-boy way, commiserating on how hard it was for a city girl with no experience to try to carry on her daddy’s ranch, and how he’d be happy to take it off her hands for a good price if she decided to go back to her accountant’s job in Dallas?”

“And there have been more incidents since you two got hitched and reunited the two parts of the Triple A,” Grant said. “Worst of which was losing Halsey.”

Duncan shook his head. “Her father’s prize herd bull, who was almost like a pet. She still hasn’t gotten over the shock of finding him dead on the road after a gate was ‘somehow’ left open. Brice, you know none of us would leave a gate open, ever, especially not one near a road with blind curves and eighteen-wheeler traffic. We’re just lucky the truck driver wasn’t killed too.”

“If it weren’t for Grant’s wife’s great ideas about using the Scott Ranch house as a conference center, bringing in some additional income, we would be in a pretty difficult situation, losing Halsey’s stud fees. We were counting on them for a lot of our operating cash over the next several years,” Duncan said.

“Thomason’s been nosing around all the ranchers, trying to get ones teetering on the brink of solvency to sell out,” Grant added.

“Maybe so,” Brice allowed. “That still doesn’t provide proof that he’s guilty of anything except wanting to build condos on every piece of land in the Hill Country that boasts a fine view.”

A chorus of disgusted groans met that observation. “So far only some of the low-landers have sold out. Good ranch land, but not the vistas like this one that would inspire the moneybag lawyers and doctors from Austin and San Antonio to buy the property for their weekend getaway houses,” Grant said.

“True,” Brice said. “So why would he want that land? It’s not like he can build some big housing development out in the middle of nowhere. The roads from Whiskey River aren’t wide enough, and the speed limits are too low for people to want to live here and commute into San Antonio or Austin.”

“I wouldn’t put it past him to do it out of sheer meanness,” Duncan said. “And the satisfaction of thinking he can get away with it.”

“Maybe,” Brice said. “But I’m thinking something about that land must be the key, if he is behind it. I thought I’d stop by the Whiskey River library later and look at the maps and property records. They have copies of some of the deed books from the county records office in Johnson City.”

“Go for it, little brother,” Grant said. “I should finish stringing the rest of the electric wire on the roadside boundary fences this week, so at least we’ll know immediately if we have any more breaks. I’ve been thinking about installing some security cameras pointed at the gates too. Although someone bent on mischief could just cut the fences; they wouldn’t need to open a gate.”

“It might be worth it. Sometimes just having the bad guys know you’ve added surveillance is enough to convince them to attack someone else,” Brice said.

Grant finished his bottled water. “Speaking of fencing, I’d better get back to work. Unlike you law enforcement wusses, who can lounge around waiting on court dates, we ranchers have to work every day.”

“Why do you think he went into law enforcement?” Duncan said, grinning.

Brice gave him a narrow look. “Maybe I need to whup you instead of Grant. Yeah, we’re wusses alright. Only have to get up before dawn and stay out all hours on a stakeout, track the bad guys through pouring rain or in the icy darkness, and get shot at by hostage-taking crazies.”

Duncan and Grant sobered, exchanging looks. “We were sorry to hear about Tad. Seriously, we appreciate what you do, protecting us. And the dangers you face. Take care of yourself, won’t you?”

“Always. Sorry to be touchy. It’s only been a week since the funeral, though.”

He’d lost one of his best friends from the police academy days ten days ago—shot in the face while doing a routine traffic stop for a burned-out taillight. But the driver had been a mule for a drug dealer, and panicking about being pulled over, had opened fire as soon as Tad tapped on his window.

The cost of the game. All the brothers knew that Brice, detailed out of the Texas Rangers Special Operations Division in Austin, and a sharpshooter when a SWAT squad was called out, could be the one in the sights of a gun-toting criminal someday.

“Well, thanks for meeting me for lunch,” Brice said, trying to return to a more upbeat mood.

“Will you be around Whiskey River for a while?” Duncan asked.

“A few days, probably. Might as well stay here rather than go back to Austin. It’s a shorter drive to the courthouse in Johnson City.”

“You’re welcome to bunk in at the house,” Duncan offered.

“Or stay here at the cabin,” Grant said.

“Hmm . . . take up residence with one of my newlywed brothers? Probably not. I might camp up at our old site on the ridge. Or I could get a room at Hell’s Half Acre B&B downtown, where I could walk to the Diner or Booze’s or the steakhouse if I’m wanting something fancy.”

Grant grinned. “That might be fitting. The swinging single dude staying in a former bordello.”

Duncan shook his head. “You might not want to stay with us, but you know our lovely wives are at least going to want to feed you if you stay in the area.”

“Well, I might not turn down an invite to some meals.”

“I should think not,” Duncan said. “I do a better steak than Barron’s, and Grant makes some mean tacos and enchiladas.”

“Dinners for sure, then,” Brice said. “I’ll text you and let you know my plans.”

“Thanks for hosting us for lunch at the cabin,” Brice said. “It’s still the best view in three counties.”

“Anytime,” Grant said. “With you chasing the bad guys all over Central Texas, we don’t get to see you all that often.”

“Well, I’ll try not to hang around long enough for you to tire of my company,” Brice said.

“Good luck at the library,” Duncan said. “I hope you turn up something useful.”

The Ranger is currently available in digital format only: 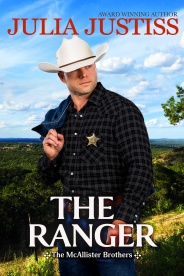 Did you know that The Ranger and many titles are available digitally from Tule's own bookstore? Check it out!