Tule author Elsa Winckler took some time to discuss her characters and story elements in An Irresistible Temptation, the third installment in The Cavallo Brothers series. 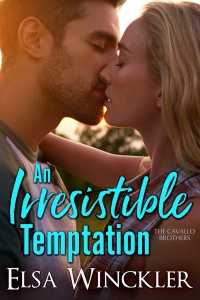 Your hero David is a former journalist. What special skills would a reporter be able to contribute to a high-end hotel?
While working as a journalist, David had to rely on words to convey the essence of what he wanted to say and, when he joined the family business, his job became marketing. He’s involved in everything from overseeing brochures, making sure the content of the website is updated regularly to dealing with clients. As a trained journalist, he had to gather facts and come to rational conclusions but when he meets the lovely school teacher Dana, he can’t seem to find the right words to express himself or come to any logical conclusions because there is nothing logical about the way he wants her.

Dana teaches high school biology — how does she keep her students engaged?
Dana has a soft heart and, because she’s been dealing with a difficult mother since birth, she connects with students with similar problems. But when se meets David, she understands, for the first time, that mere biology can’t explain the way a heart sometimes reacts. There is no scientific explanation for the way her heat creeps up her neck, her blood boils and the shortness of breath she experiences around him.

Since David is known to flirt — does he have a favorite line or does he send over a drink?
David, like his brothers, are drop-dead gorgeous and were born flirting with women. With dark hair, brown eyes and a sexy body to boot, he never even has to try very hard – women fall all over themselves to get to know him. Dana is the first woman who doesn’t seem to be impressed by his moves so he kissed her. Big mistake. What should have been a simple, easy-to-forget kiss, turned him inside out.

How does David differ from Dale (from The Cavallo Brother Book #1 An Impossible Attraction)?
David likes to cross his T’s and dots his I’s. The reason he did finally quit journalism and joined his bothers in the hotel business was because of the story about Dana’s dad. The facts weren’t checked, but his boss printed the article nevertheless. When he realized who Dana’s dad was, he does everything in his power to help her.

When you picture Dana’s mother, is there a particular actress who comes to mind?
A cold and calculating Meryl Streep as she was in the Manchiruan Candidate. 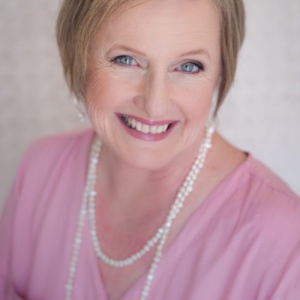 I have been reading love stories for as long as I can remember and when I ‘met’ the classic authors like Jane Austen, Elizabeth Gaskell, Henry James The Brontë sisters, etc. during my Honours studies, I was hooked for life.

I married my college boyfriend and soul mate and after 43 years, 3 interesting and wonderful children and 3 beautiful grandchildren, he still makes me weak in the knees. We are fortunate to live in the picturesque little seaside village of Betty’s Bay, South Africa with the ocean a block away and a beautiful mountain right behind us. And although life so far has not always been an easy ride, it has always been an exciting and interesting one!

I like the heroines in my stories to be beautiful, feisty, independent and headstrong.  And the heroes must be strong but possess a generous amount of sensitivity. They are of course, also gorgeous!  My stories typically incorporate the family background of the characters to better understand where they come from and who they are when we meet them in the story.