Heather Novak stopped by the Tule blog to discuss the second book in the Love Me Dead series, Grim and Bear It! 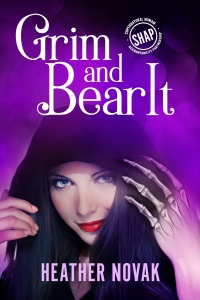 Where did you get the inspiration for Grim and Bear It?

It all started with a lifetime of watching Princess Bride! The quote “Death cannot stop true love. All it can do is delay it for awhile” encapsulates this book. When I sat down and asked myself who Jake’s partner should be, that Princess Bride line ran through my head. When Poppy appeared—a grim reaper who would rather be a wedding planner—I knew I’d found my perfect pairing.

I’m a retired theater organist and former co-host of Somewhere In Time Radio, an internationally syndicated show. We played big band and theater organ music, and I was honored to work with them for ten years, until their final show. Since I’m from Michigan and worked for the franchise, it will come as no surprise that I have the movie Somewhere In Time memorized. It helped make me the romance writer I am today.

If you could spend the day with Poppy or Jake, who would you choose and what would you do?

This was the hardest question you could’ve asked because I love them both so dearly. But…I’m going to say Poppy (don’t tell Jake!). I’d want her as my date to a wedding and then we’d sneak out early and watch some of our favorite romantic comedies. There’s just something so fun about watching romcoms with people who love them.

What song would be in the soundtrack to Poppy and Jake’s love story? Why?

The top song on the Grim and Bear It soundtrack is “The Madness” by Nicotine Dolls. It encapsulates Poppy and Jake’s story and was on repeat while I was working. It’s not a love song, but then they aren’t really a predictable couple, haha. The song, based on a true story, is about struggling with mental health while trying to portray that everything’s fine on the outside.

The lyrics go: “Gasping for life/but it’s all in your mind/you’ll be fine, you’ll be fine/just stay alive.” Poppy’s desperately trying to keep Jake alive for as long as possible, both so he can stop whoever is threatening his loved ones, but also because once he dies, Poppy will never see him again.

I’m one of those annoying people who reads an audiobook, paperback, and ebook all at the same time. In audio, I’m listening to An Acquired Taste by Kelly Cain, in ebook, I’m reading History of Us by Stacey Agdern, and my paperback of Always Practice Safe Hex by Juliette Cross is waiting for me. 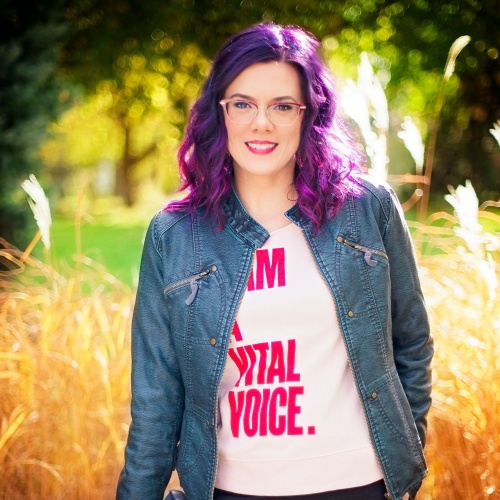 When she’s not pretending to be a rock star with purple hair, award-winning author Heather Novak is crafting sex positive romance novels to make you swoon! After her rare disease tried to kill her, Heather mutated into a superhero whose greatest power is writing stories that you can’t put down.

Heather tries to save the world (like her late mom taught her) from her home near Detroit, Michigan, where she lives with Mr. Heather and a collection of musical instruments. She is part of the LGBTQ+ community and believes Black Lives Matter.

You can learn more about Heather’s rare disease at: www.Hypopara.org